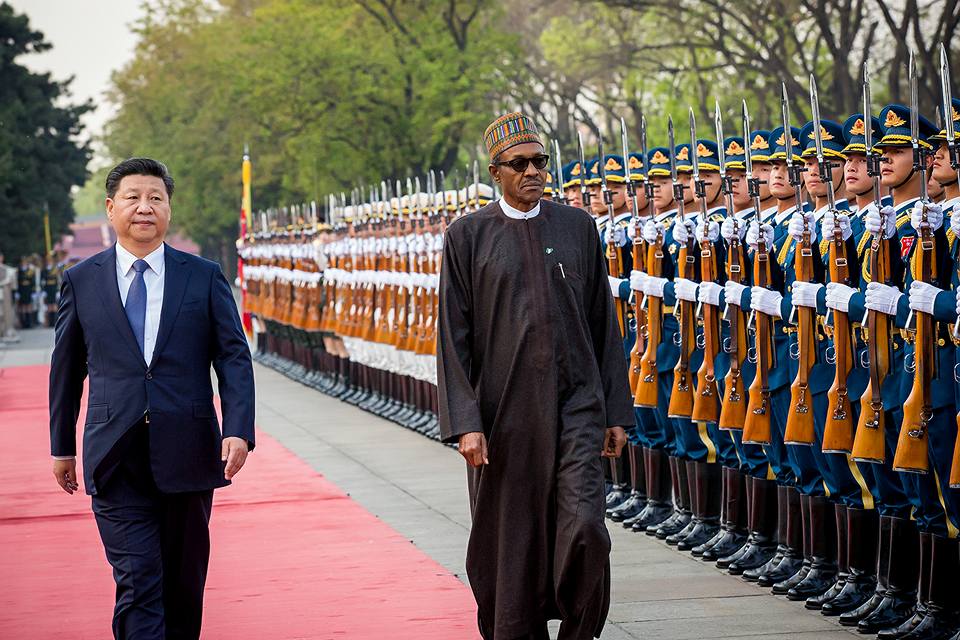 In June 2015 shortly after he was inaugurated, President Muhammadu Buhari travelled to South Africa and used the opportunity to meet with Nigerians resident in that country.

During the interactive session, the septuagenarian Nigerian leader did not mince words in saying that his age would limit his performance as the president of the country. “I wish I became Head of State when I was a governor. Now at 72, there is a limit to what I can do,” he had said.

It however seems Buhari has found a way round the limitations imposed by age.

In tackling that challenge, the President has some trusted hands around him that he often delegates duties to with specific instructions. With such huge national duties in their care, these individuals wield huge influence in the seat of power. They are powerful; in fact, they are rulers of Nigeria.

Mrs. Aisha Buhari, 45, is the wife of the President. She doesn’t use the title ‘First Lady’ favoured by the wives of previous Presidents and Heads of State. She prefers to be addressed as ‘Wife of the President.’ However, Mrs Buhari is as powerful as her predecessors.

She wields considerable influence in the administration of her husband. She is respected by most of the nation’s power brokers. She is also seen as a fountain of influence by the women and men who travel regularly within Nigeria’s corridors of power seeking one government favour or the other.

She has wives of some state governors, especially those whose husbands were elected on the platform of the ruling All Progressives Congress and wives of leaders of the National Assembly, in her innermost circle and they do her every bidding. Indeed, her first attempt at asserting herself was focused on this group.

In January, she restructured the Nigerian Governors’ Wives Forum along geopolitical lines.

She did this during a meeting held at the First Lady’s Conference Hall, Presidential Villa, Abuja with all the 36 governors’ wives present.

Like her predecessors in office, Mrs. Buhari floated a pet project, Future Assured, with the aim of empowering women and children.

Within one year in power, the President’s wife has presented two books. During the two book presentations, very powerful Nigerians who attended jostled to be in Mrs Buhari’s good books. First it was her book, ‘The Essentials of Beauty Therapy. A Complete Guide for Beauty Specialists.’ The second was the presentation of her selected speeches titled, ‘Matching words with action.’

‘The mother of the nation’ as she is fondly called is no doubt powerful. She rules in her own way from the comfort of her office located beside the President’s official residence inside the Presidential Villa.

Mallam Nasir El-Rufai is the Governor of Kaduna State. That he is very close to the President and by extension has considerable influence on Buhari is not in doubt. He is one of the most regular state governors at the Presidential Villa. Sources within the Villa say that the governor doesn’t book his visits in advance. Protocols are simply waived for him.

Owing to his closeness to the President, El-Rufai has been very influential in some of the major appointments so far made by the present administration. Prominent among the appointments that the governor had his input was Buhari’s appointment of Prof. Umaru  Danbatta as the Executive Vice Chairman and Chief Executive of the Nigerian Communications Commission.

Another appointment that El-Rufai reportedly influenced was that of Aliyu Aziz as the Director-General and Chief Executive Officer of the National Identity Management Commission. Aziz was Deputy Director, Information Technology at the Bureau of Public Enterprises when El-Rufai was the bureau’s Director-General. When he became the Minister of the Federal Capital, El-Rufai also appointed Aziz as his Information Technology Adviser.

Senator Ibikunle Amosun is the Governor of Ogun State. He has remained a long time ally of the President since their days in the defunct All Nigeria Peoples Party. They are said to be very close to the extent that Buhari passes the nights in Amosun’s houses in Lagos and Abeokuta. Before Buhari became president, Amosun is said to be the person who drives him around whenever he visited Lagos.

Amosun influenced the appointment of the Mrs. Kemi Adesoun as Buhari’s Minister of Finance. Adeosun who served as Amosun’s Commissioner of Finance in his first term had already been nominated and confirmed by the state House of Assembly as a commissioner for a second term before Amosun pushed her forward. Adeosun’s appointment was said to have further widened the political gap between Amosun and Asiwaju Bola Tinubu who was said to prefer Mr. Wale Edun to hold the position.

During the campaigns that preceded the 2015 presidential election, the first rally that was attended by Buhari’s wife, Aisha, was the one held in Abeokuta. At that rally, Buhari confirmed that the Amosuns were long-time friends of his family. He said his wife attended that rally because Amosun and his wife, Olufunso, insisted.

To further show the close relationship between the two families, when Mrs. Amosun celebrated her 50th birthday recently, Mrs. Buhari attended as the Mother of the Day despite the fact that she is five years younger than the hostess. Buhari’s children are said to frequent the Amosuns’ home in Abeokuta.

One of Nigeria’s most influential and respected senior military officers ever.  From Taraba State, Gen. Theophilus Danjuma is a power broker always sought after by successive governments. He is extremely wealthy. That he was one of the major sponsors of Buhari’s Presidency is not a secret. With interest in oil blocs, Danjuma is believed to played a major role in the emergence of Dr. Ibe Kachikwu as the Group Managing Director of the Nigerian National Petroleum Corporation and Minister of State, Petroleum Resources.

To further prove the closeness between Danjuma and Buhari, Danjuma’s wife, Daisy, was the Chief Presenter at the public presentation of Mrs. Buhari’s book, ‘The Essentials of Beauty Therapy. A Complete Guide for Beauty Specialists.’

Another major power broker in the Presidency is his nephew, Mamman Daura.  He is immensely close to the President, hence, has inputs in many of Buhari’s major decisions including appointments.

Although he holds no political office in this dispensation, Daura is often seen with the President and travels with him. He is believed to have considerable inputs in the choice of those who emerged as ministers, especially those from the North.

Daura’s influence in government did not start today. He and Buhari belonged to a group called “Kaduna Mafia” which was a group of young Northern Nigerian intellectuals, civil servants, business tycoons and military officers residing or conducting business in the former Northern capital city of Kaduna during the end of the First Republic.

The group was said to have thrived on a network of power alliances among northern aristocrats and government sympathisers who favoured the group’s pro-northern and Islamic bent. Other famous members of the group were Adamu Ciroma, Ibrahim Tahir, Mahmud Tukur and Gen. Shehu Musa Yar’Adua.

Ismaila Isa Funtua is the Chairman of the popular Bulet International Construction Company. He is said to be a personal friend of the President, hence he has Buhari’s ears on national issues, including appointments.

Although Funtua, like Daura, does not hold political office, he has much influence on the President even more than those who are holding offices.

He has been part of Buhari’s delegation on some of his foreign trips, including his official visit to the United States in July 2015.

The Chief of Staff, Abba Kyari is another power broker. The elderly man has the ears of the President, no doubt. He plans Buhari’s schedule -who to see and who he should not see. He also plans his movement in case he will be going out of the seat of power.

Apart from the traditional roles of a Chief of Staff, Buhari made it mandatory that ministers must go through Kyari if they desired any contact with him. This is in clear departure from what was obtainable in the recent past when ministers had unfettered access to their principal, the President.

Known for his bluntness, Buhari handed down the instruction on November 5, 2015 while declaring open a retreat organised by the Presidency for the then ministers-designate. “In addition, all communications and appointments from you (ministers) to the Presidency should be routed through the Office of the Chief of Staff as is normal in this Presidential System,” he had said.

As he walks a distance of about 100 metres from his office to the President’s office at intervals, Kyari always hold tenaciously to office files that may contain national secrets. He does not release his documents to anybody, including his security aides

The Secretary to the Government of the Federation, Mr. Babachir Lawal occupies a powerful position on the ladder of Nigeria’s powerful rulers. Lawal, by virtue of his position serves as secretary to important government organs such as the Federal Executive Council and the Council of State.

As government’s scribe, Lawal carries out supervisory functions on some government departments and agencies. Very outspoken, he does not hide the big influence he wields in the administration.

At the commencement of meetings of FEC, the SGF does not shy away from tackling ministers who do not settle down on time for meetings. He is also said to have the ears of the President.

There is no way influential Nigerians under Buhari will be listed without a generous mention of the Minister of State, Petroleum Resources, Dr. Ibe Kachikwu. The President displayed the confidence he had in Kachikwu when he first named him the Group Managing Director of the Nigerian National Petroleum Corporation. Not done with him yet, Buhari also made him a junior minister in the ministry that he (the President) personally supervises.

Rarely will a day pass without Kachikwu coming to the villa from the headquarters of the NNPC located in the Central Business District of Abuja to meet with Buhari at a time when many other ministers seem not to have direct access to the President. There are times they meet more than once in a day. He, it was, that announced the increase in price of fuel while Buhari was in London for an anti-corruption summit organised by the British Prime Minister, David Cameron.

Another strong man in this administration is the Director-General of the Department of State Services, Lawal Daura. He was appointed by Buhari in July, 2015. He has a clear mandate to reorganise the DSS which is believed to have been dragged into the murky waters of politics ahead of the 2015 general elections.

However under him, officials of DSS were stripped of their constitutional roles of protecting the President. Daura who has a good relationship with the Buhari, joins the President oftentimes for the Friday Jumat services that always hold inside the mosque close to the President’s office.