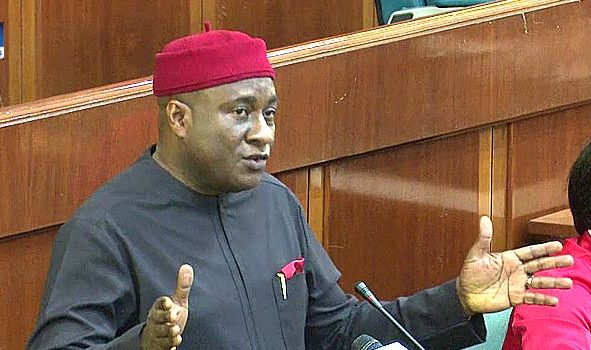 Nigerians on social media are expressing shock over the indictment of the CEO of Air Peace, Allen Onyema and the airline’s Chief of Administration and Finance, Ejiroghene Eghagha, in the United States over alleged $20 million bank fraud and money laundering.

In a statement published on the website of the U.S Department of Justice, on Friday, Onyema was accused of laundering money from Nigeria through United States bank accounts in a scheme involving false documents based on the purchase of airplanes.

Shortly after the report made its way to Nigeria’s cyberspace, Twitter users have been expressing concerns, wondering why the airline boss would be involved in bank fraud and money laundering.

Recall that Onyema recently won the hearts of many Nigerians after volunteering to evacuate hundreds of stranded Nigerians from South Africa following xenophobic attacks in the country.

He got a standing ovation from lawmakers during his visit to the House of Representatives in September. and the lawmakers also recommended him for a national honour following his heroic act of evacuating stranded Nigerians from South Africa.

However, the report of Onyema’s indictment has sparked an uproar on Twitter Nigeria since Friday night.

Reacting to the report, a Twitter user, Anastasia Uchenna – Ozoemena, who said the news has left her in shock wrote:

I so love the man that I cant even make a post about it. Jesus Christ! I am wishing the allegations are untrue or there is a mixup somewhere.

Curious @YoungOtutu wondered who Onyema could be reportedly laundering funds for.

²* Aviation LLC, receive funds in the US

³* Funds get transferred around under cover of buying airplanes.

The question now is who does he launder for?

Just when we are still celebrating our darling Allen Onyema, after his heroic rescue of Nigerians from Xenophobic South Africa, US Dept of Justice releases a damning report on allegations of fraud & money laundering totalling $20m by Air Peace CEO. Urrgh! https://t.co/XrP35EEMLb

Watch out for those who will carry this Allen onyema alleged fraud case on their head like Ghana weaving. They are most likely to be those who didn’t hail him for saving Nigerians from xenophobia in SA

Allen Onyema, Chairman and CEO of Air Peace has been indicted for fraud and money laundering in the State of Georgia. He is of course presumed innocent until proven guilty.

So two days ago, Joe Igbokwe, complained about Air peace barring him from flying because he criticised them and tonight we are seeing news of Chief Allen Onyema being a money launderer. 😊

Nigerians we need to rekax, take a breather and think. For heaven’s sake think. How can so many of us be so stupid?. So we have gov’t officials that steal/launder money, thieves in high places yet the FBI skipped them all and target Mr. Allen Onyema and you fools believe them?

Mehn!… I have read that write up from DOJ, Georgia against Allen Onyema, CEO AirPeace.

The US DOJs don’t just write… Their write ups most times are product of detailed investigations.

I hope he survives this… 🤔

Nigerians love to complain about the terrible leaders that we have. Yet we ALWAYS fail to protect the few good ones we have. Anyone who is falling for these lies being told about Mr Allen Onyema, #airpeace CEO pls don’t be too quick to believe lies.

The CEO of Air Peace Nigeria, Allen Onyema can save his Airline by quickly dissociating (stepping down as Chairman) himself from it. This indictment is a crisis that has the potential to raze his entire business empire to the ground.

Or will he take the risky legal route? https://t.co/3XiEzxVaq2

Allen Onyema, the much loved chairman of Air Peace indicted for money laundering by the DOJ in the US, Was the whole public display of kindness meant to buy some sympathy for this? Really sad!!! https://t.co/KgwA4C0vm5

Maaan this Allen Onyema news is mad troubling. I’m hoping it’s some type of mix up. But maaan federal indictment is no joke. They’ve done their homework

Allen onyema indicted for fraud , I am shocked …please how many legit business owners do we have in this country