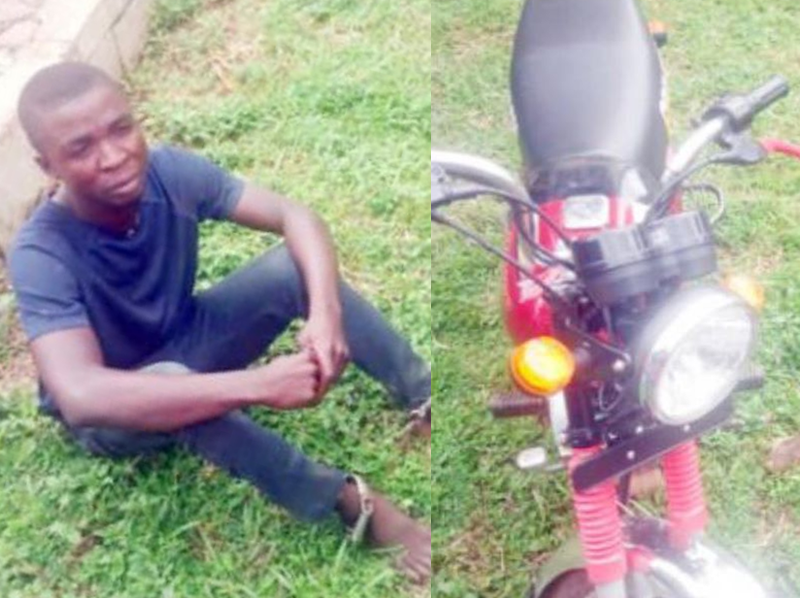 The police have arrested a 24-year-old man, Ebenezer Olorunleke, for allegedly conspiring with three others to kill his brother and steal his motorcycle and other items.

The State Police Commissioner, Mr Asuquo Amba, who paraded the suspect, said the Kogi-born Olorunleke stabbed his brother with a knife and long screwdriver on August 29, 2019 and fled.

The commissioner said the suspect and three others invaded his brother’s home at Abe Cocoa area of Okeila and stabbed him to death and stole his red coloured Bajaj motorbike with registration number ADK 100 UJ.

Recovered from the suspect, whose accomplices are still at large are a long screwdriver, knife and Bajaj motorcycle.

“They hit him in the stomach and pierced his intestine when his wife and children were not at home. He had confessed to have committed the offence, he said.

Another police source revealed that the attackers allegedly drove a long nail into the deceased’s skull while struggling to rob him.

Recounting how his brother was killed, Olorunleke said what his friends who allegedly killed his brother wanted to do was to help him collect money from him, describing his brother as a stingy individual.

“I did not follow them inside the room, but upon realising that my brother had been stabbed and was shouting, I rushed in and wanted to rescue him but he bit me and chopped off my finger.

“The guys later came to my house to attack me. They wanted to sell the machine, I resisted it. I was thinking of coming to the police to report when I was arrested with the machine”, he said