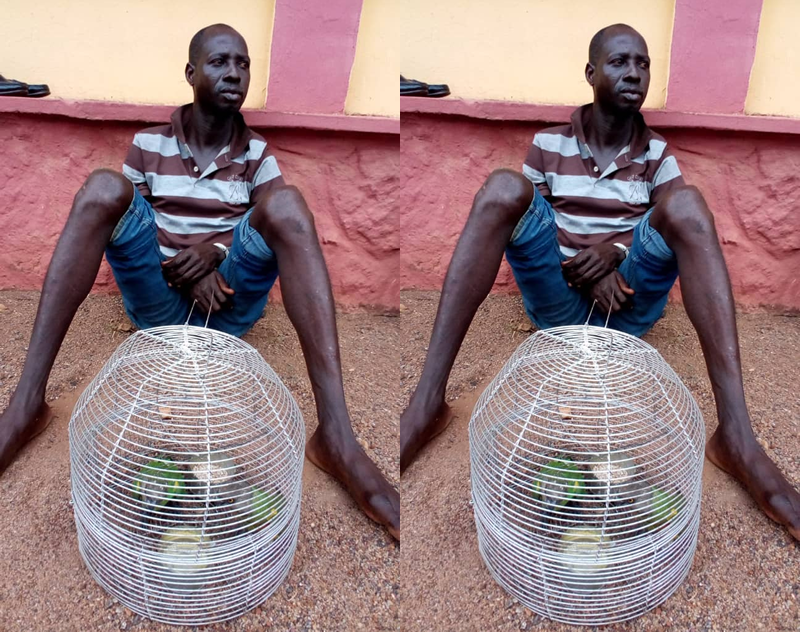 A 40-year old man, Olanrewaju Adeyinka, is cooling his heels in a police cell after he allegedly stabbed his younger brother, Gabriel, to death with window louvre for bringing two life parrots home.

The Ogun State Police Command’s Commissioner of Police, Kenneth Ebrimson, on Thursday paraded Olanrewaju, alongside 48 other suspected criminals at the state headquarters, Eleweran, Abeokuta for committing offences ranging from murder, robbery, kidnapping, among others.

Olanrewaju said he mistakenly stabbed his brother who reportedly brought two strange parrots to their home in Ilaro area of the state to death.

The suspect explained that a fight ensued between him and his younger brother after he refused to take the birds out of the house.

He further explained that while he was struggling with his brother, he (Olanrewaju) pulled a broken Louvre and stabbed his brother to death.

“It was my brother that brought birds home, but I insisted that he should not put the bird inside our house.

“I asked him to take the birds from the Parlour and keep it outside and that was when a fight started between us.

“He came to my room and started fighting me. It was during the fight that he broke my louvres.

“It was the broken louvres that I intended to take outside so as to show our neighbours when he started fighting me again that I ended up using to stab him to death.”

Adeyinka, however, said he regretted his action, describing his action as devil’s handiwork.

He also appealed to the government to pardon him so that he could take care of the remaining younger brother.

“I regretted what I did and I don’t have anything to justify my action.

“It is the devil’s work, the government should assist me anyhow they want to assist me.

“We have lost our parents for long, we are three siblings and I have mistakenly killed one. Government should just come to my aid so I can take care of the other one.”

Meanwhile, the state commissioner of police said the command has arrested 48 suspected robbers, cultists, kidnappers, fraudsters, murders among others.

MORE READING!  My uncle called me after 27 years to apologize, lady raped for six years reveals

Ebrimson said the command has succeeded in smashing many criminal gangs and recovering several arms and ammunition across the state.

The Police boss disclosed that the command also arrested fake immigration officers while trying to defraud a company around Sagamu area of the state.

“On the 10th of March 2020, four men namely Emeka Ibeh Anyawu, James Chibubueze Okocha, Moses Micheal and Oyekunle Adeoye went to Hotmak Company along Shagamu/Benin Express road Odogbolu and presented themselves to the expatriate there as officers of Nigeria Immigration service with an intent to defraud them of huge sum of money.

“Unfortunately for them, the policemen on duty at the company quickly intervened and discovered that the four men were not from Nigeria Immigration service and they were promptly arrested.”

Ebrimson further said the Police officers in the state intercepted one hundred and forty-three live cartridges from an unregistered motorcycle in Idofa Oke Agbede area of the state.

The Commissioner of Police, however, vowed to make the state unconducive for the criminals to operate.

“On our part, we are going to do everything possible within the ambit of the law to make the State unconducive for criminals in order to allow law-abiding citizens go about their lawful businesses without fear of any form of harassment or intimidation.” 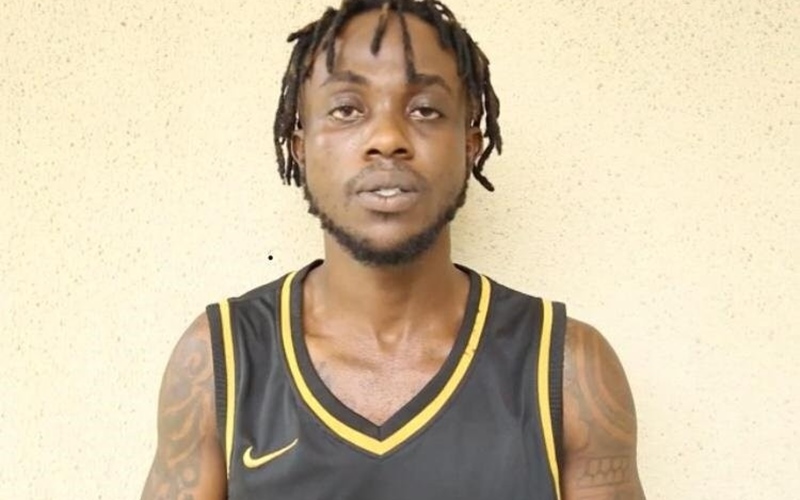 The police has rescued an American woman who was held captive against her will, in a hotel for 15 months by a Nigerian man.

Nigerian police spokesperson, Frank Mba said the retired civil servant arrived Nigeria on 13th February, 2019. The lady who is from Washington DC, was visiting 34-year-old Chukwuebuka Kasi Obiaku (pictured above), a native of Ikeduru local government area of Imo State who she met on Facebook.

Obiaku was accused of forcefully collecting and taking control of her credit and debit cards as well as the operation of her bank accounts, including the receipt of her monthly retirement benefits and allowances over the period of fifteen (15) months.

“She was however rescued by Police operatives attached to the Intelligence Response Team (IRT), Ogun State Annex following information received from a patriotic and civic minded Nigerian in the Meran area of Lagos State.

“The rescue of the American lady is coming on the heels of a similar case of abducted Philippino lady who was lured to Nigeria by her supposed lover whom she equally met on Facebook.

“Investigations reveal that the suspect, Chukwuebuka Kasi Obiaku is a graduate of Business Administration and Management and an internet fraudster who has defrauded many unsuspecting members of the public both locally and internationally.

“Chukwuebuka deliberately lured the victim into the country under the pretext of love and deceitfully married her on 15th May, 2019.

MORE READING!  50-year-old man arrested alongside neighbour for allegedly having s3x with daughter

“ He subsequently held her captive in a hotel, extorted from her monies amounting to a total of 48,000-USD.

“He also forcefully collected and took control of her credit and debit cards as well as the operation of her bank accounts including the receipt of her monthly retirement benefits and allowances over the period of fifteen (15) months.

“Chukwuebuka also used the victim as a front to defraud her associates and other foreign personalities and companies.” 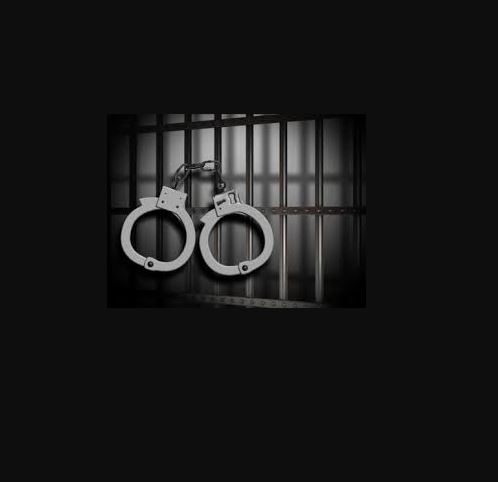 The police has arrested one Mr Badmus Folarin, for maltreating a 10-year old boy by allegedly burning him with a hot knife.

Police said Folarin admitted to punishing the boy because he opened a tin of Milo belonging to his mother and licked out of it.

According to DAILY POST, the incident occurred at Owode, in Yewa South Local Government area of Ogun State.

A statement by the Ogun State Police Command spokesperson, Abimbola Oyeyemi, on Sunday, confirmed that the suspect was arrested following a distress call received by the DPO of Owode Egbado division, SP Olabisi Elebutte.

Oyeyemi told DAILY POST that some concerned neighbours had reported through a telephone call to the DPO that,

“they were hearing a sorrowful crying of a young boy at 12, Elegushi Street, Owode Yewa.”

Consequent upon this, the DPO had reportedly detailed the patrol team to the scene where the young boy was seen lying down helplessly with serious injuries all over his body.

On enquiry, Oyeyemi informed that the police discovered that “the suspect put a knife on fire and when the knife was red-hot, he applied it to the buttock of the young boy thereby inflicting a second degree injury on the innocent boy.”

While being questioned by the police, the suspect, Oyeyemi added,

“alleged that the victim, who is living with the family. opened a tin of ‘Milo tea’ belonging to his mother and licked from it.”

According to him, the boy had been immediately rushed to OreOfe hospital by the police for medical attention, as the suspect was arrested and detained.

The suspect will be transferred to the Anti-Human and Anti-Child Labour Unit of the command for more investigations and possible prosecution; this is as ordered by the State Commissioner of Police, CP Kenneth Ebrimson. 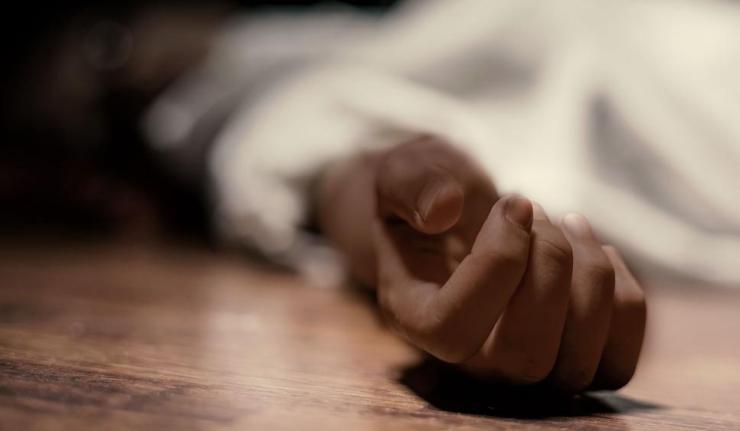 Another notorious gang leader in Ibadan, the Oyo State capital, Abiola Ebila, has been killed.

Newsmen gathered that Ebila was killed around Kudeti area of Ibadan around 12 pm on Sunday.

Recall that the killing of Ebila is coming few weeks after Ebila gang killed another gang leader known as Mosood Oladokun.

It was learnt that Ebila group had in May this year killed Oladokun during a clash.

It was gathered that there was a clash in the area and security agencies responded to it.

He, however, said he was yet to get the full details of what happened or whether anybody was killed.