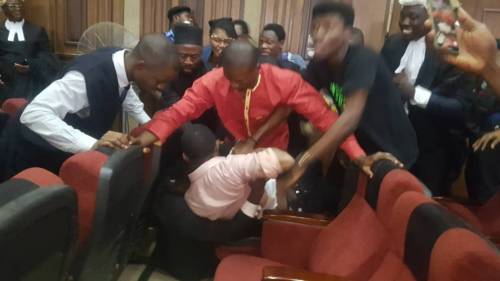 A human rights lawyer, Ebun-Olu Adegboruwa (SAN), has condemned the re-arrest of the convener of #RevolutionNow protest, Omoyele Sowore, insisting that President Muhammadu Buhari’s administration is worse than past military dictatorships.

Adegboruwa, who represented Sowore during the clampdown on June 12 activists by the military government of Gen. Sani Abacha in 1993, said as dictatorial as Abacha was, the late military dictator never disobeyed court orders.

The senior advocate told The PUNCH that when the court ordered the release of Sowore during Abacha’s time, the military obeyed immediately without hesitation.

“Abacha obeyed court judgement in Sowore’s case. In fact, most military regimes always obeyed court orders. Never in the history of Nigeria was the military able to sack the court the way we are seeing today.

“Under Abacha and even Gen. Ibrahim Babangida, the respect for the courts was known. The constitution talks of separation of powers and there ought to be respect for each arm.

“So, what we are seeing today is worse than the Abacha regime. What we are witnessing in Sowore’s case is worse than Babangida’s regime. There was never a time that soldiers went into a court during proceedings. If they wanted to arrest anyone, they would wait at the gate.”

Adegboruwa said during the military era, the late Chief Gani Fawehinmi (SAN) and Rotimi Williams (SAN) obtained court judgements against the government and they were obeyed.

He, therefore, said what Nigeria is witnessing under Buhari is not democracy but dictatorship.

The activist said even though military governments usually suspended the constitution in order to function, they obeyed court orders but it was tragic that the same Buhari who swore to uphold the constitution could desecrate it in such a manner.

“I don’t think we ever had it this bad even under the military. During the military era, they respected court orders and if they wanted to have their way, they would issue a decree such as Decree 2 which was to arrest people and then Decree 4 which was against the media.

“So, how can the court lose its power in a democracy?”