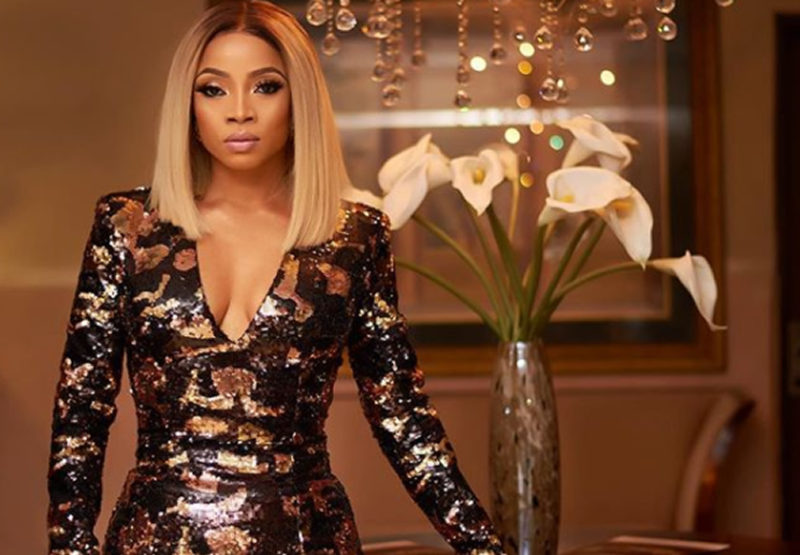 WuzupNigeria reported that Toke’s series of tweets about the viral video attracted a series of backlashes from Twitter users.

She is presently trending on Twitter NG again over her latest vlog where she gave a damning verdict on African parents.

Toke described them as the worst in the world and blamed them for “ruining lives” of their children with unorthodox child-raising values, which according to her are “screwing up” lives.

In the vlog, the media personality also addressed issues spanning parents’ intolerance for opposite-sex friendship, their dictative stance on career choices, as well as their “penchant” for instilling fear in children.

“Thanks to African parents for ruining our lives. Growing up in an African home, there are certain things we never had the balls to say. Even now, I’m 35. I still can’t stand up to my parents,” she said.

“African parents are the worst set of parents in the whole wide world. You never have an option on things that are coming in an African home. As a child, you’re told what to read in school.

“They don’t tell you what you’re good at but what they think you should be doing. It’s like, ‘I want to have a doctor, so my child must read medicine.’ Even if you do shit in maths, you’ll be an accountant.

“African parents don’t apologize. They’re never wrong. Doesn’t that bother you? How dare you say they are wrong? You almost become less confident because of the scoldings of an African mother.”

She added that the failure of African parents to discuss matters regarding sex and their prohibitory stance on having boyfriends has caused many to have relationship problems in adulthood.

“They told us to stay away from boys. We did for so long that we don’t have boyfriends. But when you’re older and are yet to marry, they call all sorts of pastors to pray for you. Something is wrong!”

Many Nigerians have taken to Twitter reacting to the OAP’s vlog. While some are ripping her apart and calling for her heads, others are corroborating her claims, saying she has said the truth.

Some ascribed the outrage trailing the vlog to the perceived hatred many social media users have for the celebrity OAP.

I read all your polarized tweets on Toke’s parents. I know a good majority of you got love from your parents +me. Ever thought about parents who transferred their aggression&failures to their kids, put them in that space then oppressed their kids?

Tilting towards how African parents wouldn’t let their kids oppose them, hardly apologize, no info about relationships with the opposite sex, insisting on the course of study etc. This is no fault of the African parent. A continent that is still battling with poverty ?

Faulty and outdated school system, poor infrastructure, absence of electricity & a million years behind the world. When we tell you guys who mingle with the high and mighty to have deliberate conversations about making things work you assume we are ranting.

Many have not seen the light yet and this may never be achieved if we remain the dark continent.

Small headline, una dey die… read the fucking post or go and watch the blog to understand what she said and how

I read all your polarized tweets on Toke’s parents.

I know a good majority of you got love from your parents +me.

Ever thought about parents who transferred their aggression&failures to their kids, put them in that space then oppressed their kids?

But why do Nigerians hate Toke though? Where is the lie in what she said? So many of us were raised in a toxic pattern of verbal, emotional n physical abuse. Our parents ignorantly thought being abusive towards us meant instilling discipline in us. I stand with Toke on this one.

We’ve always echoed how African parents disguised abuse as home training, never apologized to their kids for their wrongdoings, forced career paths, religious beliefs & spousal choices on their kids & so on.

But since it’s Toke saying these things, let’s all foam from the mouth.

You lots refuse to read and listen carefully before u go on ur judgemental spree, whether we admit it or not, many Africans parents out of ignorance instilled discipline in some cruel ways which in some cases yielded good outcomes and others not so good. I stand with #Toke

People like hating on Toke though
They just sit down to nitpick and find fault in everything she does or says
Same thing someone will say and get praised, she says and gets dragged.
Why?
Just because it is Toke

Toke shouldn’t have said African parents are the worst set of parents but sincerely speaking, they are close to it even though no one wants to say it. Yours and my parents might have not spoilt our lives but that’s due to how strong you are and not how accommodating they are.

My parents are the best in the world, they brought me up with no toxicity. They’re my role models and I will always be glad to have them I know there are others like me.
To those who were brought up with toxic chemicals like Toke Makinwa, you have our thoughts and prayers😹😹

Toke ‘s undoing was generalizing… African parents actually raised best good people in the world today… People will be fucked up with or without anyone. These days your parents have less than 16 years to impact you. Before you leave for uni either way so 🤷