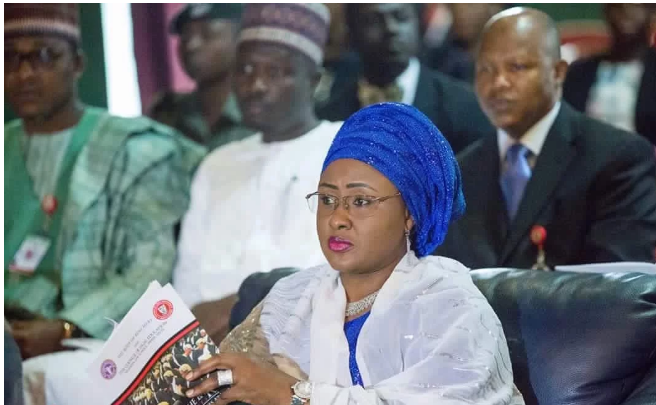 Some Nigerians on social media seem to be tired of the many lamentations of First Lady Aisha Buhari.

The wife of the President, Major General Muhammadu Buhari (rtd.), is mostly known for her active use of social media to complain about how she is not being duly accorded her honour and how she is being disrespected at the Aso Villa.

Recently, she was at loggerheads with the family of former Director-General of DSS, Mamman Daura, over claims that the family oppresses her. She also claimed she was disrespected by Daura’s daughter at the Villa.

Aisha released a press statement on Wednesday morning attacking Senior Special Assistant to Buhari on Media and Publicity, Garba Shehu, saying he is not loyal to her husband but doing the bidding of Mamman Daura against her interest.

Shortly after the statement made it to social media, Nigerians took to Twitter to attack the wife of the president.

Twitter users who seem to be tired of her frequent social media criticism of her husband’s regime, advised Aisha to leave Nigerians out of her family problem.

Some also claimed she is always quick to run to social media to ‘wail’ whenever her interest is maligned at the Aso Villa, but find it hard to lend her voice to issues that affect the interest of the nation.

They wondered why she takes to social media to complain when she had declared her support for the proposed social media bill.

Aisha had said a few weeks ago that she is in support of the social media bill which many Nigerians believe would suppress freedom of expression.

@Adunni_Achebe advised the first lady to get back in the kitchen where her husband told the world she belongs during a state visit to Germany in October 2016.

Aisha Buhari should get back in the kitchen.
No one needs to hear her stupid wailings, not after the rubbish she said during Bello’s campaign. https://t.co/VPswVP1VzF

During a joint press briefing with German Chancellor Angela Merkel in 2016, Buhari while reacting to criticism of his government by his wife had said:

“I don’t know which party my wife belongs to, but she belongs to my kitchen and my living room and the other room.”

Aisha Buhari who is in support of the bill to gag the media.

Is coming to the same media to cry for help & sympathy over,

Mamman Daura’s directive to Garba Shehu to not recognise her office.

Aisha Buhari is Very Selfish. Only talks when her ego, office, or self worth is slightly attacked. When it comes to pressing matters of state, she’s either mum or just plain like the rest of them.

READ ALSO: Garba Shehu has gone beyond his boundaries, meddling in my affairs – Aisha Buhari

Small injustice melted out on Aisha Buhari in Aso Rock, she will run to Social Media to cry. But she is advocating for tighter social media regulations. Eskizz ma, you don’t deserve our sympathy/audience, you deserve the likes of Mamman Daura, Garba Shehu and others

If Aisha Buhari cannot say what the hell is going on in Aso-rock then she should forever hold her peace or go keep herself busy in the kitchen.

My honest to God opinion is that she is manipulative. Throwing snippets to us so that we fight her enemies for her. https://t.co/ZFHZITkYSG

Aisha Buhari needs to shut up and stop disturbing us with her family problem. You support your husband’s move to ban social media and you’re here crying like an orphan. Enjoy Mammam Daura.

We have SARs to contend with.

Bar these family issues, I want Aisha Buhari to fight for quality education, human capital and youth development. Openly. And with the same passion.

If you observe this woman closely you’ll realize she’s as selfish as selfish can be.

Don’t be deceived into thinking she has the country’s best interest at hearthttps://t.co/1wgRUYJq1y

Whatever issues Aisha Buhari has with Mamman Daura is not the the highlight of today’s news. We won’t be distracted.

Pls do not be distracted by the war of personal aggrandizement between Aisha Buhari, Mamman Daura & Garba Shehu.

Twitter today is for @MobilePunch‘s bold move to stand up to the autocratic regime of the day by henceforth designating Buhari ‘Major-General’, no longer ‘President’.

Everytime Aisha Buhari fights, she fights for herself and her perceived entitlements. Absolutely tired of hearing from her.

When Aisha Buhari has issues with the cabal, she runs to the Social Media & Press to cry wolf.

This same woman advocated for a ban on social media, remember?

Madam, please stew in your vomit and leave us out. The damage your husband & his cabal has created for us is still here.

It’s this same social media Aisha Buhari said they should ban she is always coming to cry. Even Zahra was subbing Mamman Daura once saying he wants to be her stepmother. If they ban it who will they tell all this their gist?