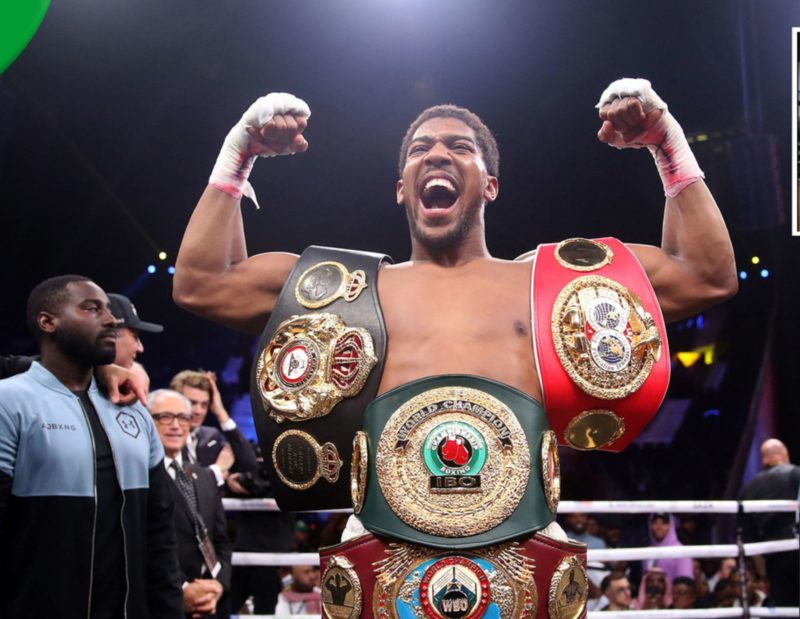 Anthony Joshua’s team has received a “huge site offer” to stage an undisputed world title clash against the winner of the Deontay Wilder-Tyson Fury fight in Saudi Arabia.

The heavyweight star regained his world titles with a rematch win over Andy Ruiz Jr at the Diriyah Arena in December and promoter Eddie Hearn hopes to head back to the Middle East for a blockbuster battle at the end of 2020.

Wilder will defend his WBC title against Fury in Las Vegas on February 22, while Joshua plans to put his WBA, IBF and WBO belts at stake against Kubrat Pulev in London in May or June.

But the Matchroom Boxing boss wants to split a massive fight purse down the middle for Joshua and the reigning WBC champion after holding recent talks with Saudi officials.

“We have to try and make that happen,” Hearn told Sky Sports. “Right now, the fight that Anthony Joshua wants is the winner of Wilder and Fury.

“We’ve been there before. Both guys have turned down 60-40 for that fight and now we have no other option, but to offer them 50-50, because the fight will never happen, subject to the boss giving the thumbs up, which I think he knows that’s the way to make this fight.

“We have a huge site offer in place for that fight to take place.”

Asked about Saudi Arabia, Hearn added: “A big option. We have a partnership out there in Saudi Arabia.

“They put the money up for the Andy Ruiz fight. Everything they promised, they delivered. They want this fight bad and when they’ve got that kind of attitude and mentality, it’s going to be difficult to beat.”

Bulgarian Pulev is next in line for Joshua at the IBF’s mandatory challenger, with a fight announcement expected in the middle of February as Hearn assesses possible venues such as The Emirates and Twickenham.

“Kubrat Pulev is the frontrunner,” said Hearn. “I think we’ve established that the IBF mandatory was called before the WBO mandatory.

“Pulev is the fight for me, and more importantly for the boss, AJ, he wants it here. He’s boxed now in Saudi Arabia for his last fight, he’s boxed in New York before that.

“For me, it’s time to come home. The bad news is that Kubrat Pulev wants as much money as possible for this fight and he realises there’s more money in Istanbul, or Saudi Arabia, or the Congo, or Nigeria, but AJ is going to call the shots.

“He may end up having to let the Pulev fight go, if he won’t fight in the places that we’d like him to fight and that is in the UK. We’re looking at dates at the end of May to the beginning of June for the Pulev fight. Everywhere is in play. Emirates Stadium, Tottenham Hotspur, The Olympic Stadium, we’ve also reached out to Twickenham as well.

“The Principality Stadium has got some dates for us, so in an ideal world, AJ’s next fight will be Kubrat Pulev in London, but this is a far from an ideal world, particularly in the boxing game.”

The WBO had also ordered Joshua to make a mandatory title defence against Oleksandr Usyk, who is now close to agreeing an alternative fight with Derek Chisora on March 28.