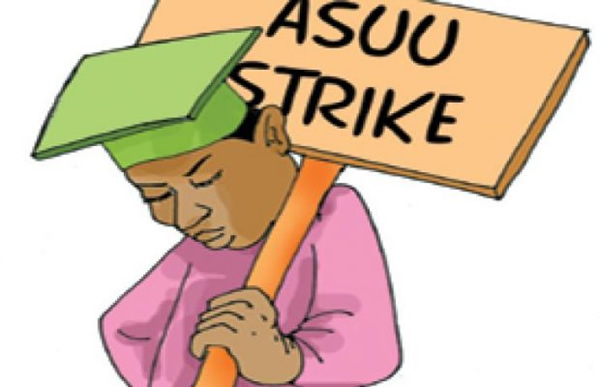 The Academic Staff Union of Universities has directed its members nationwide to go on strike as soon as the Federal Government stops lecturers’ salaries.

The ASUU chairman of the Federal University of Agriculture, Abeokuta Dr Adebayo Oni, said this in a telephone interview with one of our correspondents on Sunday.

He said there had been a standing order to commence strike once “members’ salaries are stopped.”

“By the decision of NEC, we don’t have to hold any formal meeting at all .

“The decision of NEC is that, immediately our salaries are stopped we will invoke the principle of no pay no work.

“Immediately salaries are paid and we discovered that other members of staff are paid and our members are not paid, we will automatically begin the strike.”

Meanwhile, ASUU has accused unnamed government officials of sabotaging its discussions with the Federal Government on the proposed University Transparency and Accountability Solution.

MORE READING!  EKSG to fumigate schools ahead of resumption

The union added that it was consulting with its members nationwide on the directive by the Federal Government stopping the payment of salaries to lecturers and all workers of tertiary institutions who are not enrolled on the Integrated Personnel and Payroll Information System.

Speaking in a phone interview with The PUNCH on Sunday, ASUU National President, Prof. Biodun Ogunyemi, said he did not expect the government to stop the lecturers’ salaries as discussions on the UTAS was in progress.

ASUU had rejected the Federal Government’s directive for workers to enrol in the centralised payroll system, saying it would affect the autonomy of universities.

Instead, the union proposed the UTAS to address “the peculiar cases of lecturers in the payment of salaries and other emoluments.”

The ASUU leadership also met with the President, Major General Muhammadu Buhari (retd.), at the Presidential Villa in Abuja, about three weeks ago where the proposed UTAS was presented as an alternative to IPPIS.

Buhari had directed the union to resolve the controversy over the IPPIS with the Minister of Education, Adamu Adamu.

But the Accountant-General of the Federation, Hamed Idris, had last week in a letter asked the Finance Minister not to release funds meant for January salaries to tertiary institutions, saying payments would be made through the IPPIS platform.

The letter read in part,

“l am directed to inform you that the preparation of January 2020 salary payroll and warrants of the federal tertiary institutions are ongoing and will be ready for submission on or before 29th of January, 2020.

“This is to give effect to the directive of the Federal Government that all Ministries, Departments and Agencies drawing personnel cost from the Consolidated Revenue Fund should be enrolled on the Integrated Personnel and Payroll Information System.

“In order to actualise this directive, you are please requested not to release the funds for payment of salaries to the tertiary institutions as their salaries will henceforth be paid on the IPPIS Platform with effect from January 2020.

The Federal Ministry of Education has said Nigerian secondary final year students will not be participating in the upcoming West African Examination Council (WAEC) examinations.

The Minister of Education, Mallam Adamu Adamu, who disclosed this to State House Correspondents on Wednesday after the seventh weekly virtual Federal Executive Council (FEC) meeting, also said there is no date for resumption of schools in the country yet.

He said he would prefer that Nigerian students lose an academic year than to expose them to dangers, appealing to state governments that had announced the reopening of schools to reconsider their decision for the sake of the students’ safety.

Speaking on the effect the decision to keep schools closed could have on final year secondary school students, due to write the WAEC, Adamu said Nigeria would not open the schools yet, not even for the WAEC, which is a regionally control programme.

He, however, debunked an earlier report, which claimed that the Minister of State for Education, Hon. Chukwuemeka Nwajiuba, announced August 4, 2020, as resumption date for schools, saying the Minister was misquoted.

“I don’t know whether you journalists are misquoting the Minister of State for Education or maybe quoting what WAEC said and made it into a story. Schools under the supervision of the Federal Ministry of Education will not be opened on August 4 or anytime soon.

“Our schools will only open when we believe it’s safe for our children and that is when the situation is right, not when the incidence of the infection is going up in the nation. I just want to make it clear.

“We will not open soon for examination or for any reason, unless it is safe for our children, even WAEC. WAEC will not determine for us what we do. Schools will remain closed.

“Yesterday we called on stakeholders who will tell us the situation and the way it should be done for it to be safe. While the meeting was going on, WAEC announced that they are starting examinations. Let’s see who they are going to start with.

“I will also like to use this position to ask those states that have already announced (reopening), I appeal to them. I think it is not safe. I feel responsible for all children, not just those who are in federal government controlled schools. Please let’s save our children from this.

“One infected child is enough to infect a whole class. When they close from class they go into the dormitory, this is not the right time to open schools. I appeal to the states that have already announced to reconsider it,” he said.

When asked if Nigeria will be the only country to miss out of the WAEC examinations, he said:

“Me as Minister of Education, if I’m given the chance, I don’t mind Nigeria losing a whole school year than exposing our children to danger. WAEC is a parastatal of the Ministry of Education, they cannot determine for the government what it does,” he said.

EKSG to fumigate schools ahead of resumption 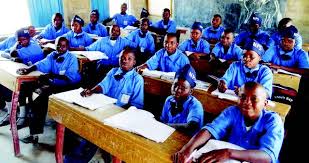 Ekiti State Government says it will begin to fumigate all public schools in preparation for the resumption of students of certificate classes.

This is contained in a statement, signed by Kunle Adeniyi, Assistant Director of Information in the state’s Ministry of Education, Science and Technology on Wednesday in Ado-Ekiti.

The statement quoted the Commissioner for Education, Science, and Technology, Mr. Foluso Daramola as saying that the fumigation exercise “is part of efforts aimed at continuing to contain the spread of the COVID-19 in Ekiti’’.

Daramola was speaking during a meeting with principals of secondary schools and other stakeholders in the education sector in the state.

He said the ministries of Education and Environment had been saddled with the responsibility of carrying out the fumigation of all public schools in order to prevent the spread of COVID-19 when schools reopened.

The commissioner directed principals and head-teachers to ensure that the running grant that would be paid to them “is expended on procurement of consumables for the students when the ones provided by the government had been exhausted’’.

He, however, advised staff, having illnesses such as high blood pressure, diabetes, asthma, and low immunity to obtain medical reports from Government Health institutions, before resumption.

In her response, Mrs. Rhoda Ojo, the President of All Nigerian Confederation of Principals of Secondary Schools (ANCOPSS) in the state, urged the state government to pay school’s grants for second and third terms for 2019/2020 Academic session

Ojo, who is also the Principal of St. Louis Grammar School, Ikere-Ekiti said this is to make teaching and learning convenient when schools reopen.

She noted that many schools had been overgrown with weeds as a result of the long break, saying urgent steps must be taken to clear the schools’ environment.

She, however, advised the government to embark on an aggressive media campaign, to sensitize parents and guardians on their roles and responsibilities, as well as to provide face masks for their children upon resumption. 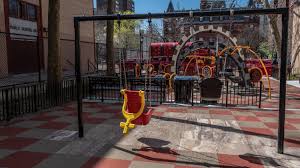 Mayor Bill Blasio on Wednesday said New York City public schools would not return to a full in-person class schedule in September, instead, would implement a mixed system that includes remote learning.

Blasio said the decision was based on President Donald Trump’s push to have schools re-opened in the autumn, a move that includes a threat to withhold funding for educational systems.

New York City is the largest public school system in the country, with around 1.1 million students.

“When you think about social distancing, you need more space.

“Many students will attend in-person classes two or three days a week. Class sizes will be limited and students will be required to wear face coverings.

“Parents who want their children to continue learning remotely will have that option,” Blasio said.

Trump’s administration argued that remote learning was not a substitute for in-person education, that there were developmental and mental health issues associated with kids being out of school.

Trump’s administration added that parents would not be able to return to work if children were at home.

However, the coronavirus has continued to spread in the U.S., with Southern states currently seeing massive spikes and the nation hitting record high daily caseloads