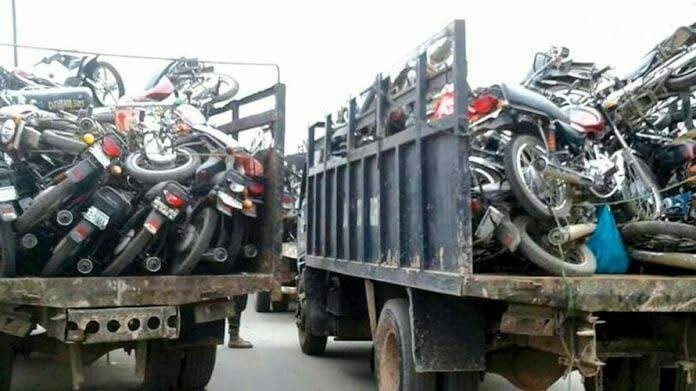 As the ban on commercials motorbike in 15 local areas in Lagos starts yesterday, a truck loaded with motorbikes was spotted on Friday night leaving the Ijegun-Satelite for North.

In an interaction with one of them, who identified himself as Muhammed on the reason behind leaving Lagos, he said,

“We have been leaving since December 2019. It pays to carry our Okada back to Arewa with N11,000 rather than allow Police demand N20,000 and we won’t be assured of getting our bikes back.

In the same vein, police officers were spotted with patrol bans on Oshodi-Apapa express looking out for defaulters.

MORE READING!  JUST IN: Senators donate 50% of their salaries to fight against COVID-19
Continue Reading
You may also like...
Related Topics:Lagos, Mile 12, Mile 2, Nigeria, North, Okada