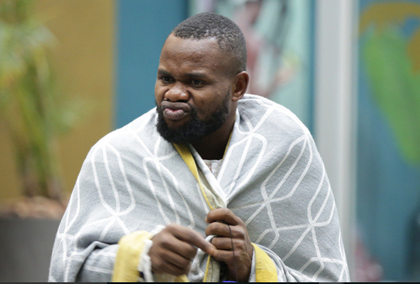 Ex-Big Brother Naija housemate, Ekemini Ekerete, otherwise known as Kemen, sparked an uproar on Twitter on Monday with his appearance in a comedy skit which a section of social media believes supports sexual harassment.

In the skit, Kemen, who featured as a boy builder was walking on the street when he hit the back of a lady who was walking with her boyfriend. The lady challenged her boyfriend to fight back, but instead, the guy handed her over to Kemen implying that he could not confront the physical strength of Kemen.

Although this is not the first time such scenes would be portrayed in comedy skits, but social media users are lambasting Kemen for his role in the skit

Some social media users claim Kemen, who was disqualified from the 2017 edition of BBNaija for sexually harassing fellow housemate T Boss in the house, has not learnt his lessons and shouldn’t have gotten involved in such skit.

Other social media users, however, differ with those calling for Kemen’s head, as they claim his act was just a comedy skit which should not be taken too serious.

Just incase you haven’t seen the skit, Kemen made every effort not to touch the babe’s ass self..
This country nawa ooo

One boda is even saying rubbish. fine boy, no sense. Tueh!!!
pic.twitter.com/JAuf5IgsMj

So beacuse we are doing campaign for Cynthia to go to jail, bitterleaf fc went to instagram to drag Kemen for a skit he spanked a girl’s ass🤣

A girl will be minding her business, a guy will go & slap her ass for no reason & y”all see it as a funny Joke. Kemen who Sexually Assaulted a Woman on National TV still embarrasing himself. Those kinna jokes are stale & irritating in 2019

Bovi did it, Anwar did it, everybody laugh but because of the hatred you’ve created for Kemen in your head, you’re trying to justify nonsense. Clownery

You ppl that are dragging kemen because of his past are still the ones that would come and tweet “your past doesn’t define you” or “because you did something in the past doesn’t mean you can’t be an advocate against it in the present”
Sorry to say, you’re not well pic.twitter.com/CFcWDr6wf0

Aunty Cynthia is going to Jail so bitter leaf twitter wants to channel their anger to Kemen.

Put off your data darling, “Men are Scum” won’t be trending today.

Not one single “sexual harassment” tweet or post but because it’s Kemen, everybody dey form Pastor Adeboye

So what did Kemen do exactly that’s wrong in the video fgs?

Fork all of you dragging him…you deserve the clown emoji you circus . SMH

The most important question to ask about that skit is “Who owns the skit?”

Obviously, it’s not Kemen.
He was featured in it so I don’t see any point dragging him
Yes, He was once accused for assault but that’s gone. It’s in the past.

Even rapist and woman beaters are hear ranting nonsense 😏 pic.twitter.com/28bTaZksnj

What if Kemen had done this????
Na to go use am worship Ogun or behead am for Sango😂😂😂

Nigerians to Kemen: Put those things behind you and comeback stronger. You can do it bro.

Skit maker invites Kemen for a skit because of his physique

Same Nigerians: He shouldn’t be playing such roles yen yen

So a nigga shouldn’t move on with his life cos of past allegations?

#kemen anyone dragging kemen for this skit is just an oponu… how and where did he touch the lady’s breast? You can’t be stupid and mad at same time… Just choose a befitting vocation in the options above… awon werey (s)@OgbonnaCO @Murmony ps, pass a verdict https://t.co/pgpGhVBP0w

The kemen skit is an everyday “if a muscled guy hits your girlfriend what will you do?” skit, so I won’t say the dragging is justified. The only thing I would say is the joke isn’t funny, it’s been stale since Aiyegbeni missed that open goal for Nigeria.

Related Topics:BBNaijaFeaturedKemensexual assaultSexual harassment
Up Next

Even if it’s a false accusation, I’ll still believe any lady who says she was raped – YBNL’s Temmie