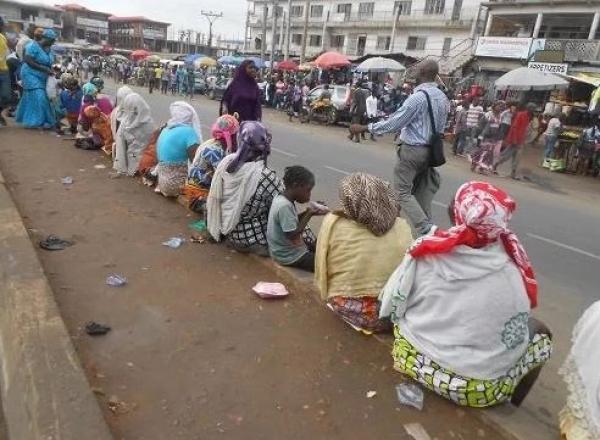 A Nigerian lady has shared her encounter with a man disguising as a beggar and lying to passersby that his wife was lying sick in the hospital and needed money for a blood transfusion.

She shared videos of her encounter with the man via her Instagram page @Wemar_collections.

She said the man had approached her and her friend as they parked their car by the roadside to buy earphones and phone charger in Benin, Edo State, asking for financial assistance for his ‘wife’ who just gave birth and was in need of blood.

Moved by the man’s story, she insisted on following him to the hospital to see the ‘wife’ and buy the blood she supposedly needed.

She said as they approached the hospital, the man started cooking up stories that they would not be allowed to enter the theatre and the ladies should just give him the money he needed.

“Now I know not everyone who wants financial assistance along the road should be given listening ears. I’m deeply hurt by this experience today, the rate at which people lie with the lives of family members to get little change is so annoying.

“I needed new earphones and charger, I drove down with @ficoskincare to get one cos she needed an earphone too while talking with the seller.

“This man came and requested for some financial assistance, saying his wife was in the hospital and he was in need of blood for his wife because she just gave birth with operation and is in need of blood urgently, at first I replied I wasn’t having enough cash with me then @ficoskincare asked him to enter the car let’s go meet his wife and help out with buying the blood.

“At first, I was like my car then I said ok, let’s do it , he entered the car and we drove very close to the hospital then he started saying his wife was in the theatre , we wouldn’t be allowed to see her that we should just help him with the money since we were rich, that the blood wasn’t available in the hospital, he has to go get the blood quickly.

“He didn’t want us to stress ourselves walking up and down in the hospital, His story was getting mixed up too quickly then @ficoskincare confirmed he was lying because she was a professional nurse and things weren’t adding up.

“Why lie with such? Our father is a merciful God. After catching him in the fact, he was still lying he lost all his children too. I know things are hard but today’s Experience wasn’t a joke.”