In a bid to encourage small businesses in Nigeria amid the COVID-19 pandemic, President Muhammadu Buhari will address Micro Small and Medium Enterprises (MSMEs).

The address which would form part of the 2020 MSMEs award would hold July 16, Mr. Tola Johnson, Special Assistant to the President on MSMEs, Office of the Vice President.

Johnson who addressed a virtual news conference in Abuja on Friday said that in spite of the ravaging pandemic and its effects on MEMSe, the awards were still going on.

He, however, said that the award was only going to hold virtually, adding that the portal for registration would be open on June 1 and remain open for 30 days.

“The portal for this year’s edition of the award will be open on the 1st of June and it will be open for 30 days.

“Once the portal is open, SMEs across the country can go and nominate themselves in whatever category of their choice.

The award this year would be held on July 16, it would be a unique one because it would be virtual.

“All award recipients and other participants and guests will join the event via video conference from different locations across the country.

“This is in line with the established protocols for COVID-19 containment by the Federal Government through the Nigeria Centre for Disease Control (NCDC).

According to Johnson, Vice President Yemi Osinbajo will be coordinating the virtual awards.

“One unique thing we will be seeing this year is that President Muhammadu Buhari will be delivering a speech targeted at encouraging MSMEs across the nation.

“Interested and qualified MEMEs are to visit www.msmeclinics.gov.ng,” he said.

Johnson added that the attendant car, cash, and other prices would also be given during the awards regardless of the fact that it would be virtual.

He said that all prizes would be sent to respective award recipients in their respective locations.

He added that the federal government would also inaugurate a 200,000 capacity Yam Storage facility for MSMEs in Zaki Biam, Benue, as part of measures to support MSMEs in the state.

He said that the yam storage facility was part of the government scheme to establish a shared facility to support MSMEs.

“The MSMEs Shared Facility Scheme of the federal government is one of the innovations from the National MSMEs Clinics.

“The vision is to provide necessary infrastructure and support facilities in production clusters across the country.

“So far, the federal government has completed two pilot schemes of the Shared Facility project in Oyo and Bauchi,” he said.

Mr. Johnson further disclosed that the Small and Medium Enterprises Development Agency of Nigeria (SMEDAN), which is a partner in the awards, would be getting the information to all SMEs across the nation.

According to him and other members of the team, SMEDAN will be reaching out to micro-enterprises that may not have access to the online portal and assist them with their submissions. 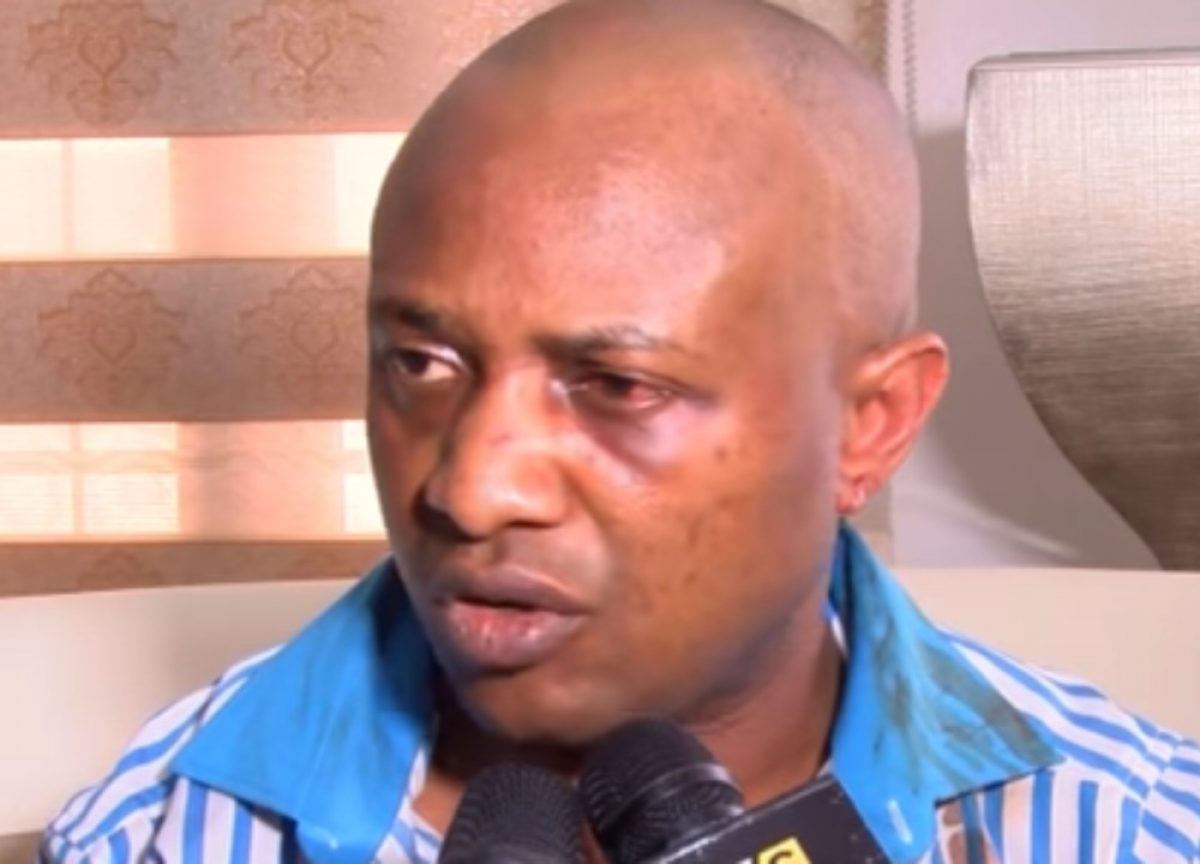 Justice Hakeem Oshodi of an Ikeja High Court has ordered the Lagos State Office of the Public Defender (OPD) to takeover defence of alleged kidnap kingpin, Chukwudimeme Onwuamadike aka Evans due to his inability to afford his legal fees.

On Friday, Attorney-General, Moyosore Onigbanjo (SAN), informed the court that his team telephoned the law chambers of Ladi Williams (SAN) and Co., who represented Evans on the last court date.

Onigbanjo disclosed that they were informed that Evans had not “perfected their brief”.

Evans, first arraigned alongside others on August 30, 2017, has changed lawyers more than three times during the course of his trial.

Justice Oshodi said Evans had developed a habit of engaging the services of lawyers that “disappeared halfway through the trial.”

This, he decried, has caused delays in the case.

He stated that the court “will not breach Section 36(6) of the 1999 Constitution by going ahead with today’s business of the court which is the hearing of the no-case submissions”.

However, the second defendant, Uche Amadi, did not file a no-case submission.

Defence counsels, Roger Adewole, Olanrewaju Ajanaku, M.C Izokwu and Emmanuel Ochai, informed the court that no prima facie (correct until proven otherwise) case had been made against the defendants by Lagos State.

They prayed the court to dismiss the case against the defendants.

Justice Oshodi adjourned until August 14 for ruling and possible continuation of trial.

The defendants are standing trial over the alleged kidnap of Donatius Dunu, the Chief Executive Officer of Maydon Pharmaceutical Ltd.

The prosecution said the defendants allegedly kidnapped Dunu along Ilupeju Road, Lagos on February 14, 2017, and collected 223,000 Euros (N100million) as ransom from his family.

But the captive escaped and alerted the police while being held by his abductors who requested additional money even after the initial ransom was paid.

Witnesses including Dunu have testified against Evan’s and accomplices.

On January 10, 2020, the prosecution closed its case against the defendants. 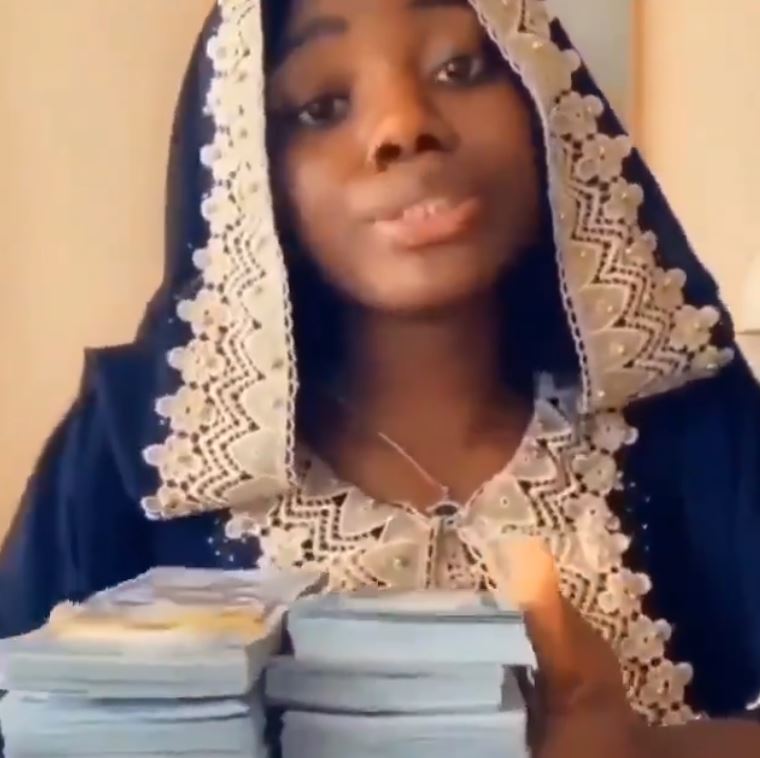 In a new video that’s causing a stir on Nigerian social media, a lady is seen counting wads of dollar notes allegedly amounting to $200,000 as she tells her fellow ladies to “give their lady parts to people who can afford it”.

The lady, who’s said to be a popular retailer of aphrodisiacs (Kayan Mata) is seen in the video telling ladies to give their lady parts to those who can afford to pay them in dollars and not in Naira.

The video has since caused a stir on social media with people blaming the lady’s video on the society endorsing greed which allows for an inordinate desire to be rich. Others feel she’s just trying to gather traffic so she can sell her products.

Abiola Oke, CEO of OkayPlayer resigns after multiple women took to Twitter to accuse him of unethical conduct 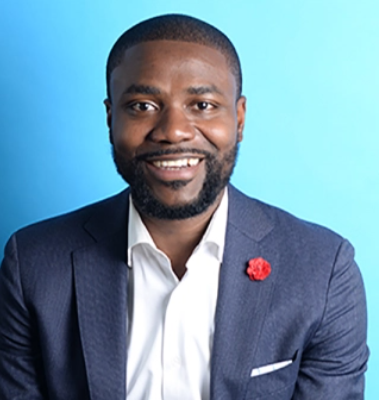 Abiola Oke, CEO and publisher of the indie music website Okayplayer and OkayAfrica, has resigned after multiple women took to Twitter to accuse him of inappropriate behavior and creating a toxic work environment.

The allegations surfaced on Tuesday, June 23 and more women are still speaking up even now. 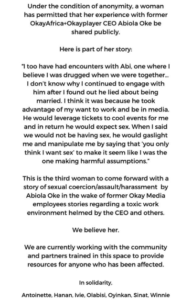 They also accused Abiola of the exploitation of Black women. Most of the women who worked with Okayplayer and OkayAfrica said the exploitation and toxic work environment made them suffer trauma.

They added that the company prided themselves in employing Black women but they did it for “optics” and exploited the women.

In the statement, it was disclosed that Abiola has resigned and the company has cut all ties with him.

The statement reads: “Effective immediately, we have severed all ties and accepted the resignation of Abiola Oke as CEO and Publisher of Okayplayer and OkayAfrica. We take the allegations that have surfaced very seriously, and we stand with the brave women who came forward.”

Questlove added in the caption. “More announcements coming up. This was long overdue.”

The statement also said that an outside party will investigate the company’s policies and practices.

“We’re committed to creating a work environment that’s inclusive and respectful for all,” the statement said. 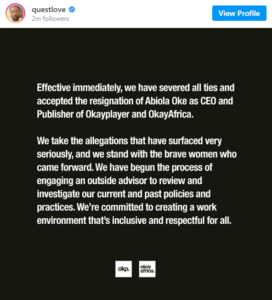 Rachel Hislop, Editor in Chief of OkayAfrica, was also called out for her “complicity” and she released a statement on Twitter.

“I fully support all of the women who have come forward to detail their experiences while working at OkayAfrica and Okayplayer. You are heard and validated,” she began in her statement.

She added: “Reading your accounts of your time with the company was a gut check of all of the ways I may have been complicit in adhering to an archaic media structure that simply is not built to prioritize Black women. I am truly sorry that these are experiences you have to carry as a result…” 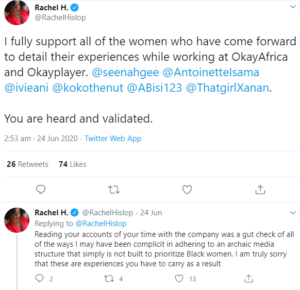 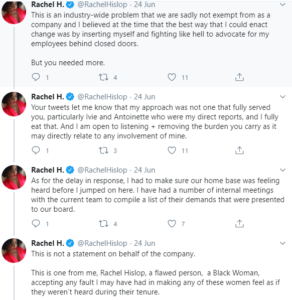 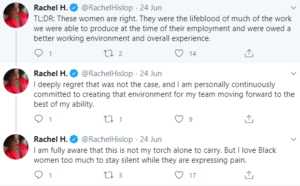 Below are tweets from the women making the allegations and from others showing solidarity. 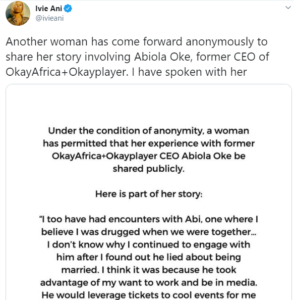 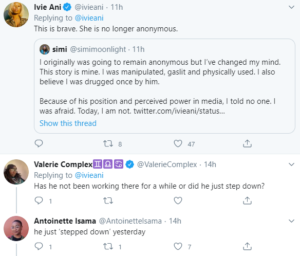 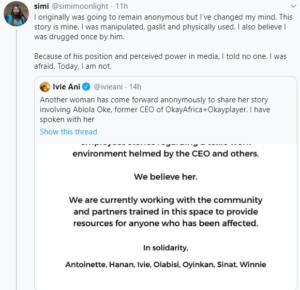 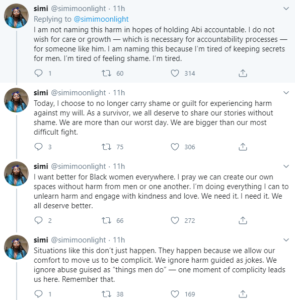 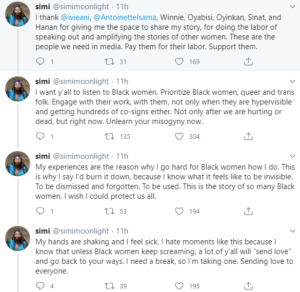 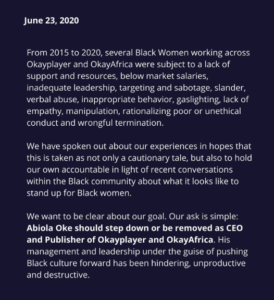 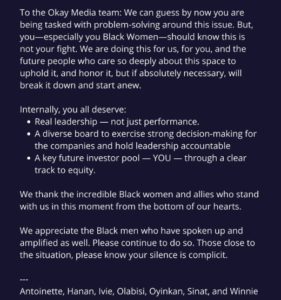