Adewale Aladejana, CEO Sapphire Group, and a protege of Pastor Biodun Fatoyinbo has apologised for his insensitive comments about Busola Dakolo and other rape victims.

Aladejana who is a minister at Commonwealth of Zion Assembly had earlier defended his pastor in an Instagram post.

He also alleged that the singer and his wife are not saints either as they were involved in pre-marital sex before wedlock.

Following the criticisms, backlash, threats and derogatory comments that greeted him, “the COZA bred” said

“There has been a lot of misunderstanding due to my earlier post and Its important to clarify that I DON’T SUPPORT RAPE!

“I am a father of two lovely daughters and a beautiful wife.

I am surrounded by women; Sapphire Group is made up of close to 1000 women and we have done a lot for women empowerment and will continue to do so.

“I apologise to everyone my previous post has offended as it is insensitive to victims of rape.

“Pastor Biodun Fatoyinbo has also come out to refute the allegations leveled against him, it is now a legal matter and the truth will come to light.

“Please accept my apologies and I will be more sensitive in the future.” 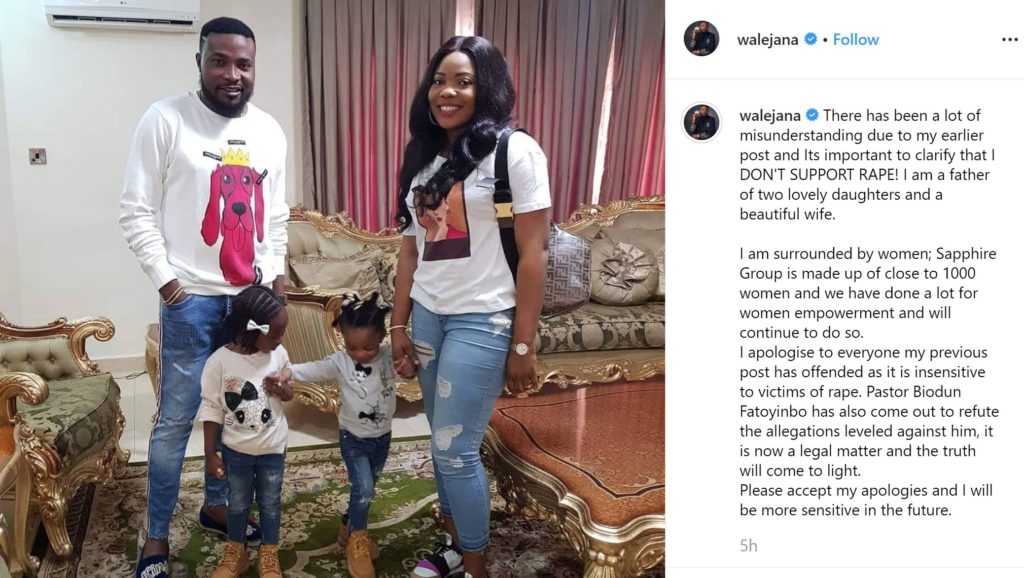