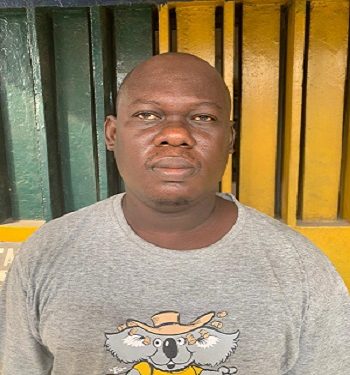 A car wash operator, Sheriff Balogun, has been arrested for allegedly killing his neighbour, Peter Elebo.

35-year-old Balogun allegedly committed the offence during a fight with the deceased over the time to close the gate of their place of residence at No. 32 Ola Street, Itire, Lagos State.

The state Police Public Relations Officer, Bala Elkana, said in a statement on Sunday, that during the fight, Balogun pushed Elebo to the ground, adding that the latter started vomiting blood and died on the spot.

He stated that the deceased’s daughter, Faith, reported the incident at the Itire Police Division, where personnel were mobilised to arrest Balogun, adding that the case had been transferred to the State Criminal Investigation and Intelligence Department, Panti, Yaba, for further investigation.

“On Saturday, January 11, 2020, around 7.20am, one Faith Elebo, of No. 32 Ola Street, reported at the Itire Police Station that around 1.30am, one Sheriff Balogun, 35, who lives in the same compound with them, had a fight with her father, Peter Elebo, about when to close the compound’s gate.

“Sherif Balogun pushed down Peter Elebo, who started vomiting blood and died on the spot. Homicide detectives led by the Itire Divisional Police Officer, SP Barkfur Kromkyes, visited the scene. The corpse of the deceased person was evacuated to the mortuary for autopsy. The suspect was arrested and transferred to the State Criminal Investigation and Intelligence Department, Yaba, for discreet investigation and prosecution.”