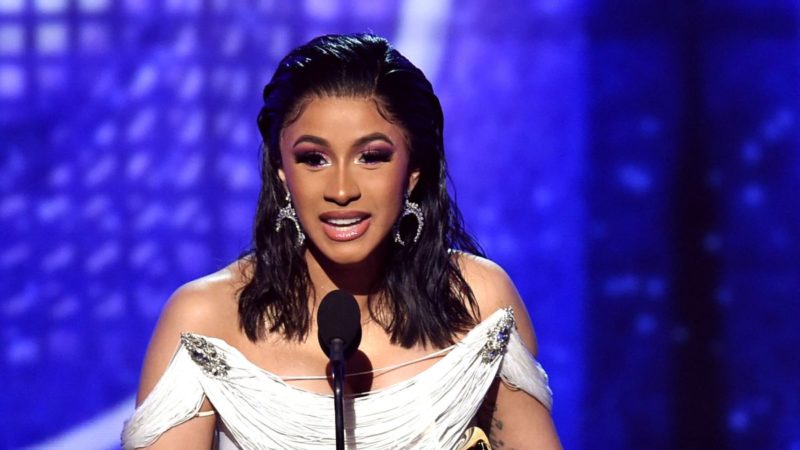 Recently, Famous American Rapper, Cardi B, was on the verge of leaving it all in America and relocating to Nigeria, but lately it seems the rapper has found a new hobby and a strategic one at that.

Cardi says she wants to be a politician, I am guessing the U.S-Iran tensions over the past couple of days has inspired  something in her.

The Bernie Sanders supporter in a trilogy of tweets on Sunday mooted the idea of joining politics, though she immediately negates it in one of the tweets.

“I think I want to be a politician.I really love government even tho I don’t agree with Goverment(sic)”, she wrote.

The second tweet was an indirect dig at President Donald Trump, who almost triggered a war- with Iran after the assassination of Lt. General Qassem Soleimani, the fall-out of which made Cardi B declare she wanted to file for a Nigerian nationality and escape from America.

“Like I was watching War documentaries. No matter how many weapons a country have you need people ! How are you trying to go against a country and possibly start a war when this country lacks patriotism? I barely see people claiming they LOVE being American”, she wrote.

And in the third tweet, thinking that she may not have come across clearly enough to her 8.8million Twitter followers, she promised to expatiate on her political views.

Cardi B, born as Belcalis Marlenis Almánzar on 11 October, 1992 has had years of flirtation with politicians and politics. Though she is just 27, she holds strong political views on gun control, immigration and social security. She is certainly not a fan of Donald Trump.

Instead, she supports Senator Bernie Sanders, who is running for the second time for US Presidency as a Democrat.

According to her biography on Wikipedia, during the 2016 presidential primaries, she warned her fans of Donald Trump’s immigration policies and encouraged them to “vote for Daddy Bernie [Sanders].

At the Grammy Awards in 2018, she appeared in a video along with Hillary Clinton to narrate a portion of Fire and Fury, Michael Wolff’s insider’s account of Trump’s administration, and stated “Why am I even reading this shit? I can’t believe this. I can’t believe—this is how he really lives his life?”

She has praised President Franklin D. Roosevelt for advocating for the Social Security program and the New Deal project in general and has noted her admiration for his wife Eleanor Roosevelt’s humanitarianism and advocacy for African-Americans.

She said of Franklin D. Roosevelt, “he helped us get over the Depression, all while he was in a wheelchair. Like, this man was suffering from polio at the time of his presidency, and yet all he was worried about was trying to make America great—make America great again for real. He’s the real ‘Make America Great Again,’ because if it wasn’t for him, old people wouldn’t even get Social Security.”

During the 2018–19 United States federal government shutdown she released a video on Instagram, where she noted “our country is a hellhole right now” that quickly became viral.

Cardi has stated that she has always been obsessed with politics and even said that her high school career goal was to be a history teacher.

Traditional Wedding: Omawumi celebrates second anniversary
When K1 asked for Mayegun tittle 11 years ago, my forefathers did not give consent – Alaafin

Eat’N’Go to expand operation to 14 cities in Nigeria