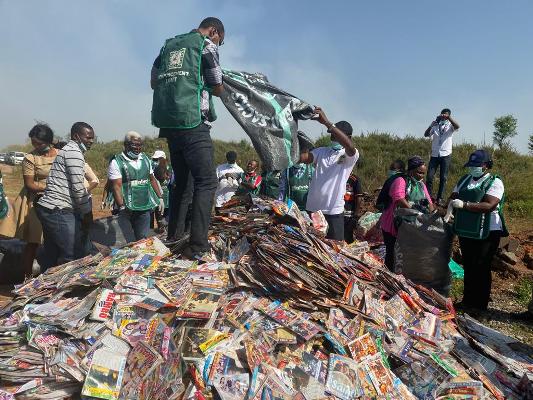 The National Film and Video Censors Board (NFVCB), on Friday, destroyed unclassified and other prohibited films and videos valued at N500 million.

The items seized from the Nigerian market were destroyed at the Federal Capital Territory (FCT).

The News Agency of Nigeria reports that the officials of the NFVCB, officers of the Nigerian Police Force and that of the Federal Fire Service were among stakeholders present during the exercise.

Executive Director of the board, Adedayo Thomas, said that the items were confiscated during raid operations and enforcement drive in markets in the Federal Capital Territory and its neighbouring towns.

“Our enforcement drive within a period resulted to the removal of these unapproved film and video works with street value of over N500 million.

“The creative industry is acclaimed to have contributed 1.4 percent to Nigeria’s GDP, and it can do more for owners, producers and distributors of films and video works to get value from their investment.

“If the sector is in a mess, investors will not come, that is why we are cleaning the market for the film owners to enjoy the reward of their work,’’ he said.

READ ALSO: Man blocks friend for not picking his calls, only to discover the unexpected had happened

He attributed the success recorded by the board during the period to the unrelenting activities of its Task Force, a body constituted to champion the raid of illegal film outlets across Nigeria.

Thomas added that the board has secured the collaboration of the Nigerian Police Force, which has speed up the arrest and prosecution of marketers and distributors of illicit film and video works across Nigeria.

He explained further that the Task Force mandate was to rid the Nigerian market of unapproved distributions, unlicensed distributors and exhibitors, among other functions.

“One of the key facilitators of the objectives of President Muhammadu Buhari’s government is the continuous improvement on, respect for, and enforcement of intellectual property and ownership rights in the film industry.

“This is pursued by discouraging the distribution of unapproved, unclassified and unwholesome films and tackling other illicit activities in the film market.

“Industry players lose billions of naira to adulterated, smuggled and unclassified works through agents and distributors, which ultimately denies the government its statutory revenues.

“It is on this premise that the National Film and Video Censors Board, about two years ago, re-constituted the National Task Force on unapproved movies with the support of the Minister of Information and Culture.

“The immediate intervention of the Task Force, which includes industry stakeholders, guilds and in-house operations staff of the board, led to many unprecedented massive raid successes across the country,” he said.

In his remark, the Inspector General of Police (IGP), Mohammed Adamu, commended the NFVCB for remaining resolute in raiding Nigerian film market of unwholesome products, adding that the force was willing to always work with it.

The  IGP, who was represented by AIG David Folawiyo, in charge of Training and Development, pledged the police willingness to provide training and technical support for the board.

“The NFVCB has by this milestone strengthen our laws, and the Nigerian Police Force is willing to work with it, even more.

“All states command have been given signals to always release officers to provide support for  the NFVCB, nationwide whenever needed.

Also, the Minister of Information and Culture, Lai Mohammed, who lighted fire on the illicit films, said it would serve as deterrent and prevent illegal products from selling in the market at the expense of genuine ones.

The minister, represented by Mr Augustus Babajide, Director of Entertainment and Creative Services, said: “This kind of enforcement will encourage creativity and attract investors to  the creative sector.”

NAN reports that the NFVCB, established in 1993, regulates the films and video industry in Nigeria.