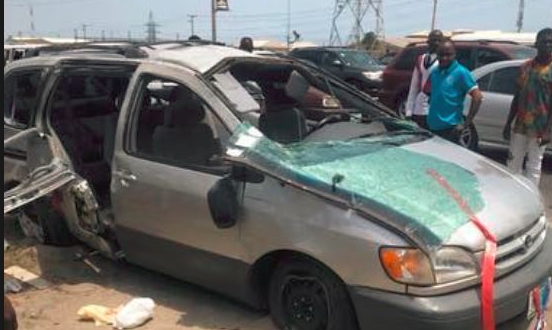 It was gathered that an Abuja-Lagos bound Toyota Sienna belonging to Ever Ready Transport company with registration number Edo 835 BEN, which was on high speed while transiting through the community, knocked down the victim identified as Sunday Promise.

According to eyewitnesses, Promise, a pupil of Muslim Primary School, Ikaram-Akoko died instantly while the driver of the bus drove away.

It, however, took the effort of residents who gave the hit and run driver a hot chase before he was caught at the Ministry area of Agbaluku, Arigidi-Akoko a distance of about 15 kilometres from the accident scene at Ikaram-Akoko.

The driver was subsequently handed over to the police with the vehicle impounded at the police station.

Confirming the incident, the Divisional Police Officer, Oke-Agbe Akoko, Johnson Akintola, stated that the bus driver is currently in custody as he disclosed that investigation has commenced.

Also, in a telephone chat with the Ikare unit of the Federal Road Safety Corps, FRSC, Yinka Akande, attributed the accident to overspeeding, particularly within the town as he cautioned motorists to always slow down whenever they are passing through residential areas.

He appealed that speed breakers be installed on all areas around schools to reduce or eradicate such ugly incidents in the future.