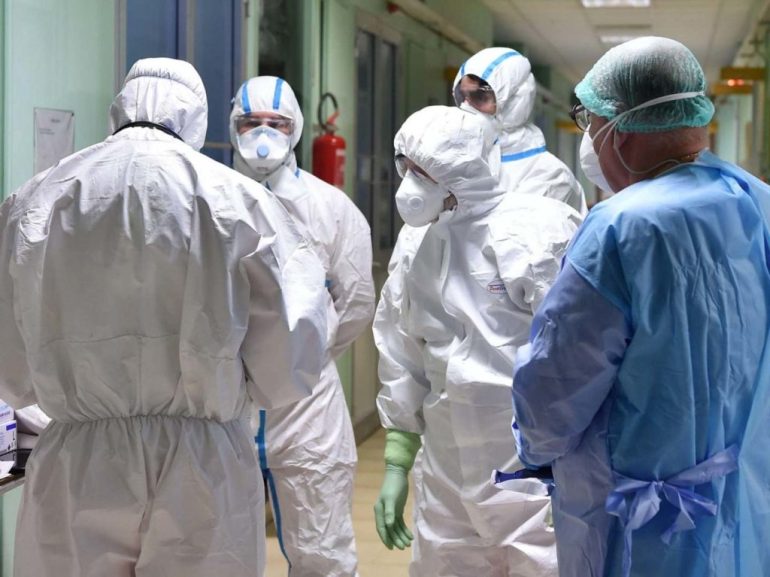 The COVID-19 virus has claimed more than 20,000 lives across the globe, as of Wednesday, according to the latest figures from Johns Hopkins University.

The virus, which was first reported in Wuhan, a city in China’s Hubei province, has infected more than 451,000 people, while nearly 112,000 have recovered. China has more than 81,600 cases, with around 3,200 fatalities and nearly 73,000 recoveries. With more infections now reported outside China than within, the country claims the outbreak has been largely contained.

Following a slight dip in new fatalities on Monday, Italy’s death toll doubled that of China on Wednesday. The country reported around 6,820 deaths, while China has nearly 3,200.

The total fatalities in the U.S. surged past 800 on Wednesday, making it the fifth-largest death toll outside China. Most of the deaths in the U.S. have been in New York, which has seen at least 265 fatalities, while Washington state has reported at least 134.

Italy has more deaths than any other country and remains the worst-hit nation outside China, with nearly 69,200 confirmed cases. However, the country also reports the second-highest number of recoveries outside China, after Iran. Italy has seen more than 8,300 people recover from infection.

Spain’s death toll has also overtaken that of China, with 738 new fatalities recorded on Wednesday, Reuters reports, bringing its total to at least 3,434 deaths.

Madrid’s skating rink has reportedly been made into a makeshift morgue, while dozens have died in nursing homes across the country. Spain began its 11th day of a 15-day lockdown on Wednesday, which is likely to be extended to 30 days, Reuters reports.

MORE READING!  Why do my children look like my wife's co-worker? Man confused shares painful story

Schools, bars, restaurants and most shops are closed, while social gatherings are banned and residents are required to remain in their homes.

“We have achieved a near total reduction in social contact,” the director of Spain’s health emergency coordination center, Fernando Simón, said at a press conference Wednesday.

Spain is near the peak of the outbreak, Simón added, with the country reporting more than 47,600 confirmed cases on Wednesday.

“If we are not already at the peak, we are very close,” he said. “I cannot say that we have reached it.” He added it would be “counterproductive” to think about easing restrictions in the country anytime soon, the Associated Press reports.

The outbreak also devastated Iran, which has the third-highest death toll outside China and the fourth highest in the world. The virus has killed at least 2,077 people in Iran, while more than 27,000 cases have been confirmed in the country, as of Wednesday. Iran also has the highest number of recoveries outside China, with more than 9,600 having recovered from the infection.

France has more than a thousand fatalities, with its death toll at 1,100 on Wednesday. It has the third-highest number of deaths in Europe and the fourth highest outside China. Over 22,600 people have been infected in the country.

Data on COVID-19 cases is from Johns Hopkins University unless otherwise stated.

COVID-19: Kano governor orders total lockdown of state
Man who filmed himself licking a toilet bowl in ‘coronavirus challenge’ is now in hospital with the deadly disease