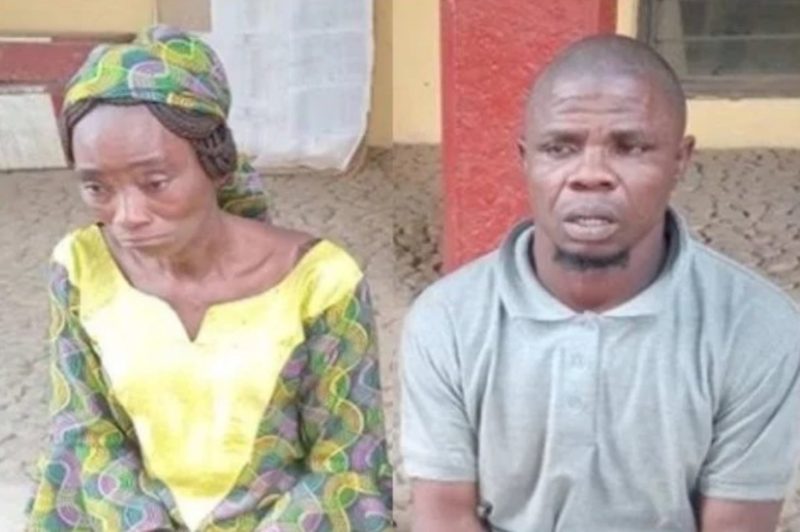 The Nigeria Security and Civil Defence Corps (NSCDC) on Monday said it arrested a couple for torturing a 10-year-old child in Ibadan.

NSCDC Commandant, Alhaji Iskilu Akinsanya while parading the suspects, said that Olawale Taofeek a carpenter who lives at No 43 Olupo, Amuloko area of Ibadan and his wife Romoke Olawale 38 years of the same area, jointly tortured their daughter Abibat Olawale by tying the girl’s hand to the ceiling and putting fire under her, till the girl confess to an allegation of theft.

Mr. Olawale alleged that Abibat Olawale took (N3, 000) three thousand naira from the house and the money, according to him, belongs to one Rukayat Trimisiyu of the same community.

It was gathered that during a search for the money, N600 was found in Abibat’s bag and that she later brought the remaining N2,400 from where it was hidden in the house.

“As part of responsibilities saddled by the Nigeria Security and Civil Defence Corps (NSCDC) to save and protect lives and properties of Nigerians in the 2003 Act and amended act of 2007 respectively, the Anti-Human Trafficking and child protection unit of the corps recently arrested one Olawale Taofeek (M) 41 years old, an indigene of Ede, Osun State”.

“due to the damages caused by the torture, Abibat Olawale is still recovering at the hospital where the NSCDC took her.

“Whosoever that is still in act of torturing children or in habit of taking law into their hands should desist because Oyo NSCDC will not condone any act of jungle-justice.

“Olawale Taofeek will be charge to court after the completion of the investigation by the command”.