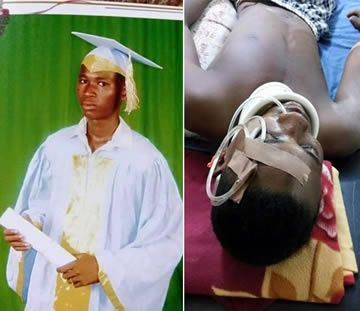 A 25-year-old man, Kabir Ahmed, has been admitted to the Federal Medical Centre in Yola, Adamawa State, after he was allegedly beaten into a coma by some policemen attached to the Doubeli division.

The policemen, who were said to be in mufti, had on May 16 at about 10am raided Zanranda Street in the Jimeta area of the state to arrest some suspected smokers.

PUNCH Metro learnt that the cops searched the people they met on the street and arrested one of them found with cannabis.

They reportedly wanted to apprehend others when Ahmed, who was in front of his house, cautioned the cops not to arrest “innocent” persons.

When they declined, he allegedly started arguing with them, leading to his arrest.

He was reportedly whisked away in a tricycle to the station, where he was tortured until he became unconscious.

An eyewitness, Awal Aminu, who spoke with our correspondent on the telephone, said Ahmed, a National Diploma holder in crime management, attempted to challenge “the excesses” of the cops.

He said, “The policemen came into the street in a Keke Napep (tricycle). The policemen confronted us and we asked them what we did. They said they came to search us. We asked them to identify themselves because they were in mufti, which they did. They found hemp on a man and arrested him.

“They wanted to arrest the rest of us saying we were at the place they found an exhibit. We were on it when Kabiru (Ahmed) came from his house and asked the policemen what our offence was. They dragged him into the Keke Napep and took him to the station.”

A resident of the area, Mrs. Afusat Raji, said the policemen, after allegedly beating Ahmed to stupor, called his mother at about 12am that he had been rushed to the FMC.

She said, “His mother went to the station that afternoon to beg them; they did not listen. She went with a lawyer to secure his bail, but they refused. It was around 12am that the woman was called from the station that Kabiru was in the hospital. He is still in a critical condition.”

A human rights activist, Adamu Ibrahim, said Kabiru’s spinal cord was affected and lamented that the police authorities did not show any concern since he was admitted at the hospital.

He called on the Inspector-General of Police, Solomon Arase, to wade into the matter and bring the policemen to book.

However, the Adamawa State Police Command spokesperson, DSP Othman Abubakar, denied that Ahmed was tortured, saying he sustained injuries after falling into a ditch.

He said, “A distress call was received from a resident of the area that some hoodlums were taking hard drugs there. Our men responded and on arrival, the suspects took to their heels. The man in question was arrested for obstructing policemen from performing their lawful duty.

“He attempted to escape from the police and ran into a ditch. He is among those that our men went to arrest. I can’t say whether the policemen were in mufti or not.”

See how hairdresser nearly killed her stepdaughter for bed-wetting
‘Aisha Buhari, El-Rufai are angry with Osinbajo for convening security meeting’