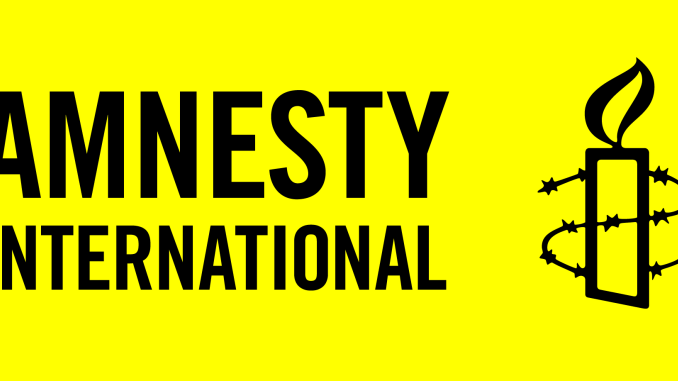 The Acting Director, Defence Information, Brigadier General Onyema Nwachukwu, in a statement, cautioned the international human rights group to put an end to its “reckless distortion of facts in its bid to satisfy its puppeteers by undermining Nigeria’s Military campaign against terrorism in the North East”.

“The Defence Headquarters (DHQ) has taken cognizance of yet another falsified report by Amnesty International (AI) in a campaign of calumny targeting the Nigerian Military and deliberately supporting the callous acts of terrorism perpetuated by Boko Haram Terrorists (BHTs) and Islamic State of West African Province (ISWAP).

“This inglorious campaign is contained in a recent report alleging employment of unlawful tactics of razing down villages and unlawful detention of locals by troops. This is line with the AIs usual mannerism and tenacious efforts aimed at disparaging the Armed Forces of Nigeria (AFN).

“The Defence Headquarters wishes to state unambiguously that the allegations being touted by AI are nothing but a betrayal of its lack of in-depth knowledge of the goings-on in the North East (NE) theatre of operation.”

“It is expedient to state that troops of Operation Lafiya Dole who are conducting Counter-Terrorism and Counter-Insurgency Operations in the NE do not employ arson as an operational tactic. It is a well-known fact, going by the modus operandi of BHTs, that they have more often than not engaged in the atrocious acts of looting and burning of villages, as well as destroying infrastructures.

“It therefore, beats ones imagination that AI is attributing these atrocities to AFN troops who are legitimately defending the country guided by extant rules of engagement and operational codes of conduct.

“AI must understand the fact that Nigeria is at war against terrorism in the NE and that the troops have a constitutional mandate to protect lives and property, even if it means conducting an evacuation to save and secure lives of civilians in the conflict. Protecting civilians by evacuating them from the line of fire during combat is not a violation of the international law of conflict or a war crime.

“It is rather a commendable effort by the troops to prevent collateral damage during combat. Our troops should therefore be commended for making deliberate efforts to evacuate civilians in order to protect their lives and property.

“It is also crucial to point out, that troops deployed to fight terrorism in the NE do not attack or raze down villages, communities or settlements, rather they launch offensive on terrorists’ camps, enclaves and hide outs.

“Based on actionable intelligence, persons who provide logistics and other forms of support to the terrorists are arrested and subjected to thorough investigation by a combined team of professionals drawn from the intelligence community of the Armed Forces and other security agencies. Anyone not found culpable is not held in custody for further investigations.

“AI must therefore put an end to its reckless distortion of facts in its desperate bid to satisfy its puppeteers by undermining Nigeria’s Military campaign against terrorism in the NE.

“We urge members of the public to please discountenance AIs report, as it is not a true and realistic reflection of troops’ counter terrorism operation in the NE.”

Police confirm killing of a mobile policeman in Delta (photo) 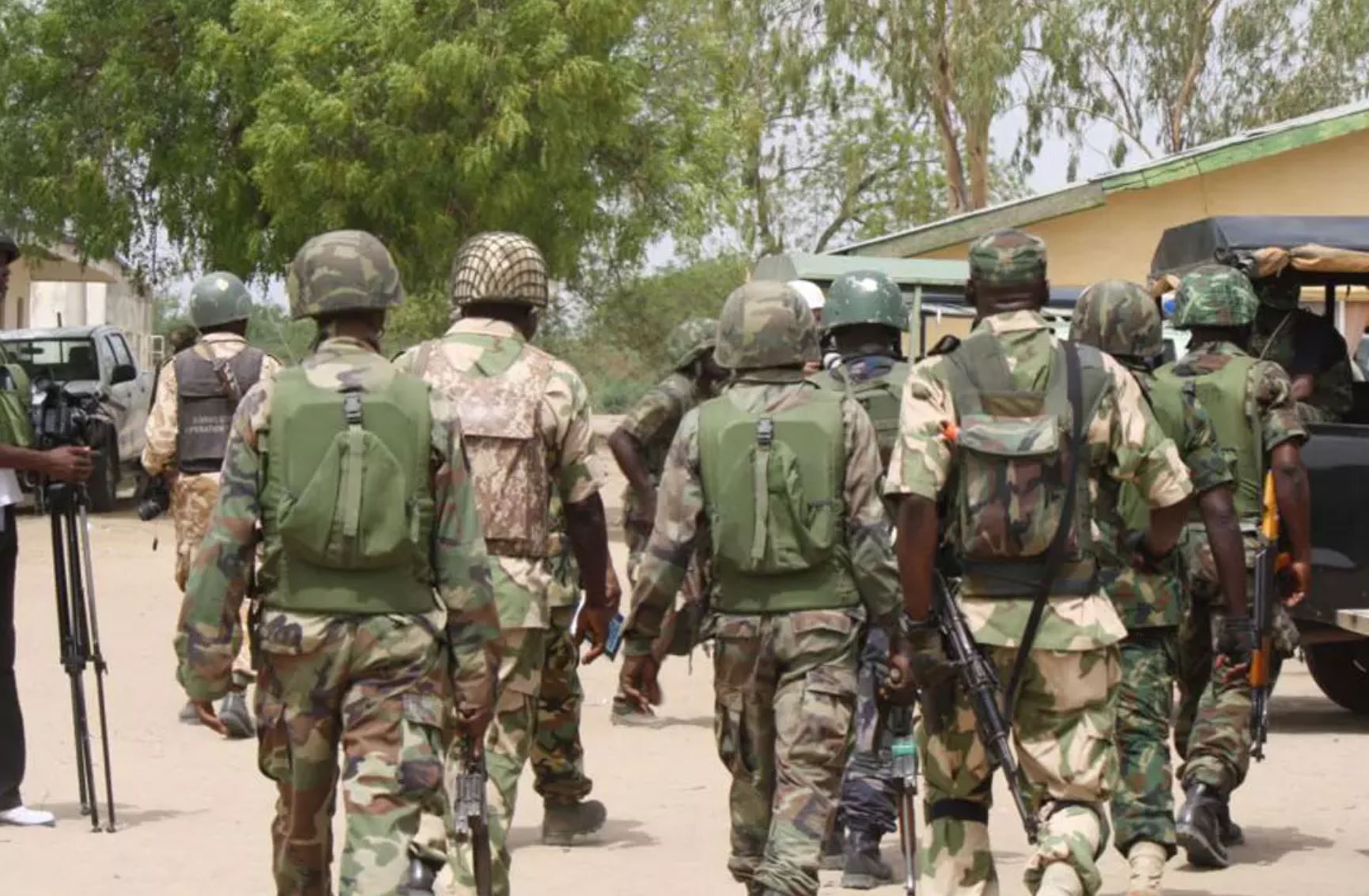 The Defence Headquarters (DHQ) on Sunday said that four terrorists, including two women, Aishatu Manye and Kelune Mate, identified as wives of the local Boko Haram commander at Gajingi in Madagali area of Adamawa State were amongst insurgents captured alive in the 17 operations successfully conducted by the military last month in renewed efforts to end insurgents’ activities in the country.

This was contained in a statement made available to newsmen in Abuja by the Coordinator Defence Media Operations (DMO) Major John Enenche.

He added that in the same vein, 75 members of the criminal group were eliminated in 17 encounters in the month of June just as the sustained onslaught by the troops also resulted in surrendering of a number of insurgents during the month.

Gen Enenche further explained that the troops also arrested one Boko Haram spy named Kawalu, in Michika while another Boko Haram fighter was captured in an encounter at Miyanti general area in Bama area of Borno.

He revealed that the encounters also led to the recovery of assorted arms and a large cache of ammunition, including one anti-aircraft gun, 13 AK-47 rifles, one sniper rifle, 21 locally made guns, two Dane guns, and one rocket-propelled gun.

“It is equally heart-warming to note that during the period, troops rescued 35 persons from the captivity of BHTs/ISWAP criminals, amongst those rescued were 18 women, 16 children and one adult male

He quoted the Chief of Army Staff, Lt.-Gen. Tukur Buratai, as commending the troops for the resilience and patriotism they have continued to demonstrate in crushing the remnants of Boko Haram to criminals. 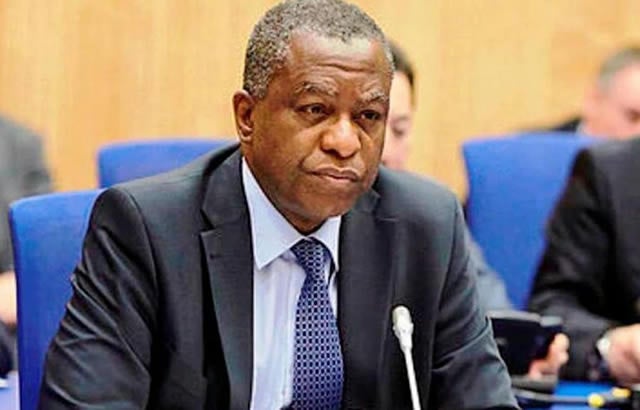 The Minister of Foreign Affairs, Mr Geoffrey Onyeama, says that another batch of 324 stranded Nigerians are airborne from Turkey, to arrive at the Nnamdi Azikiwe International Airport, Abuja on Sunday by 9 p.m.

The minister made the disclosure on his twitter handle @GeoffreyOnyeama on Sunday.

He said that the returnees were being conveyed by Turkish Airlines and Air Peace from Cyprus and Ankara, respectively.

Onyeama said that the Turkish Airline conveying 238 evacuees departed Cyprus and would arrive in Abuja, while the Air Peace Airline with 86 passengers would land in Lagos and later proceed to Abuja for the rest of the passengers to disembark.

“@flyairpeace conveying 86 Nigerians is also airborne from Ankara #Turkey to Lagos and Abuja. Estimated time of arrival is 9.00 p.m.

“All evacuees will then self-isolate for the mandatory 14 days,” the minister twitter. 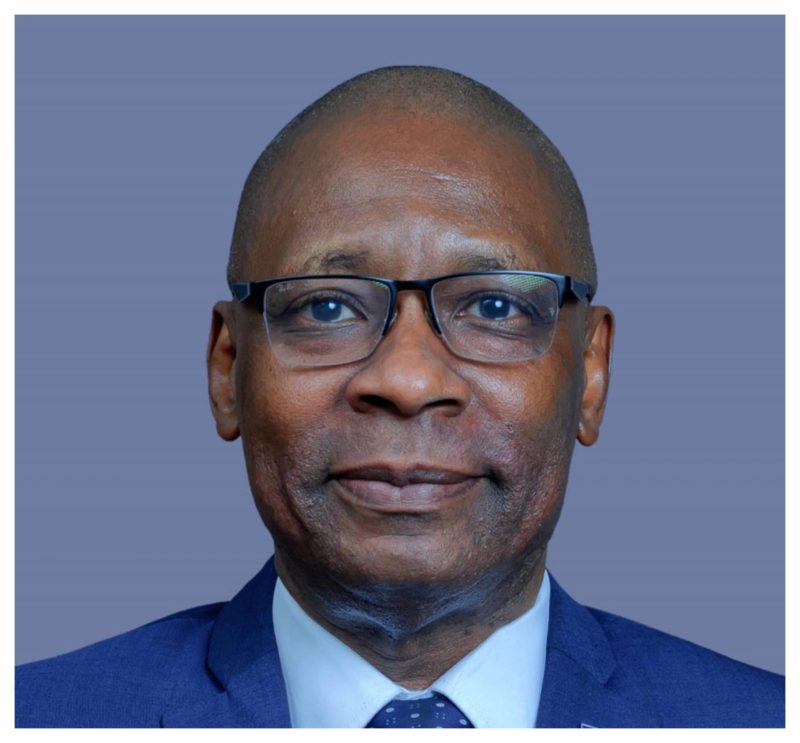 Fidelity Bank Plc has announced that two of its Board members, Mr Ernest Ebi (MFR) who has been serving as Chairman, Board of Directors and Mr Seni Adetu who has been serving as an Independent Non-Executive Director, having successfully completed their tenure in accordance with the Bank’s internal governance policy, will be stepping down from the Board.

Under the Chairmanship of Mr Ernest Ebi, the Bank recorded significant growth across key financial metrics with both Messrs. Ebi and Adetu playing significant roles, complementing management effort in the delivery of these milestones; in service of the long term vision of the Bank. The Bank’s market share position has also been materially strengthened over this period.

The Board is also pleased to announce that the retiring Chairman will be succeeded by Mr. Mustafa Chike-Obi who is currently the Executive Vice Chairman at Alpha African Advisory.

Prior to joining Alpha African Advisory, he was the inaugural CEO, Asset Management Corporation of Nigeria (AMCON), a Federal Government-backed institution, established to resolve the problem of non-performing loan assets of Nigerian Banks after the 2008 global financial crisis.

Mr Chike-Obi was Founding President at Madison Advisors, a financial services advisory and consulting firm in New Jersey, specializing in hedge funds and private equity investment advice. He holds a Bachelor’s degree in Mathematics from the University of Lagos (First Class Honors) and an MBA from Stanford University Graduate School of Business.

Mr Ebi will, however, continue in the role until the in-coming Chairman assumes office, as part of the process of ensuring a smooth and successful transition. The changes being announced further attest to Fidelity Bank’s high governance standards and best practices in compliance with internal succession policies.

The outgoing Chairman expressed pride in the results that the Bank achieved during his time as Chairman. ‘I feel that the management team has consolidated on our plans to become one of the fastest-growing Banks in the country strongly rooted in technology only comparable with the best in the world.

I am confident that my successor will continue on that path to take the Bank to its next stage of growth and advancement.  I wish my successor, the management team, and the entire staff of Fidelity Bank the very best for continued success”, he said.

“It has been an honor to be part of the Board over the last few years. Throughout this time, I have been humbled by the commitment and hard work of the Board and Management, and their passion for creating a truly global bank.

I am very grateful to them, as I am to Fidelity Bank’s many other stakeholders, with whom we have worked to build a long-term, sustainable business”.

The Managing Director/CEO, Fidelity Bank, Mr Nnamdi John Okonkwo, commended the contributions of the outgoing Board members, saying that the Board and indeed the bank has benefited immensely from their experiences and looks forward to continuing the Bank’s upward growth trajectory with the incoming Chairman Designate.

SSCE timetable in circulation not from us, WAEC warns candidates