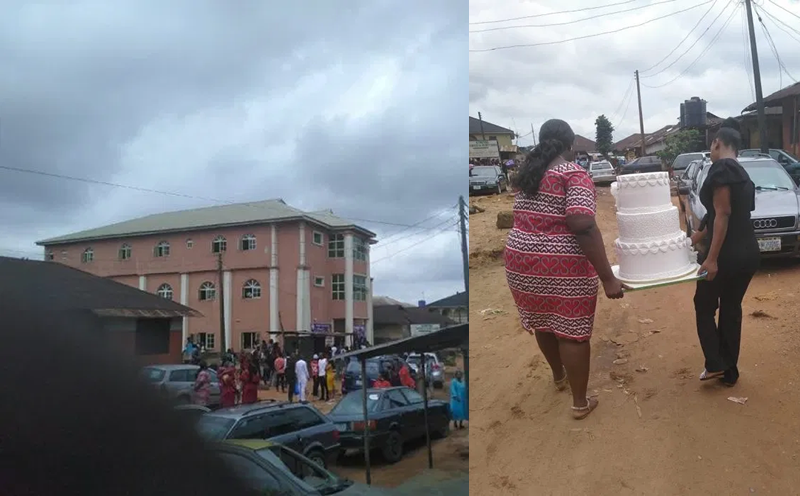 A jilted woman, on Saturday, stormed a church during a wedding, seized the microphone from the pastor, accused the groom of dumping her and demanded that the wedding ceremony be stopped immediately.

The incident happened at the International Pentecostal Holiness Church in Benin, the capital city of Edo State.

The enraged woman, whose identity could not be ascertained, was said to have learnt about the wedding ceremony between the man, simply identified as Dele, and his bride , whose name was given as Blessing, via a Facebook post by an unidentified user before the traditional and court wedding ceremonies were held.

Blessing was said to be a caterer by profession.

According to reports, the scorned woman had stormed the church with some hefty-looking men in an Audi car at 6.30am and waited patiently till the wedding ceremony began at 12 pm.

Trouble started when the officiating pastor asked the congregation if anyone knew of any reason for why the couple should not be joined as husband and wife.

At the point when the ring bearer was about handling the ring box to the groom, the self-acclaimed jilted lover matched to the altar, seized the microphone from the pastor and shouted “no! no! this wedding will not hold.”

The shocked pastor was said to have repeated the announcement for the second time, and the light-complexion woman again answered “no” in a thunderous voice, to the bewilderment of the entire congregation.

She further narrated how the groom proposed to marry her in 2017, after a courtship that lasted for seven years, but that the relationship did not produce any child.

The enraged woman told the congregation that she entered into a covenant with Dele before the church altar where he worshipped.

“He (Dele) no longer picked my calls. He abandoned me. Why? What did I do to you?”

The new bride who watched helplessly as her joy and hope faded, collapsed on her seat, while Dele, who was clad in a cream-coloured suit on black trousers​ and a pair of glasses, broke down in tears.

Turmoil pervaded the entire neighbourhood, following the suspension of the wedding ceremony by the officiating pastor.

Some of the invitees accused the presiding pastor of failing to carry out a background check on the couple, whereas others blamed the unfortunate incident on the sexual recklessness of the groom.

A member of the church who did not want to be named claimed that the groom was sighted at the birthday celebration of his ex-lover just a few weeks ago.

She added that tears were seen on Dele’s eyes even before the commencement of the wedding ceremony.

“The best man who was highly embarrassed by his action, urged him to calm down while he used​ a white handkerchief to wipe away his tears.

“Dele attended her birthday few weeks ago. It will surprise you to know that Dele was still going to see that girl at home. Why will you do such thing when your wedding is around the corner?” She queried.

Two hours after the incident, the officiating pastor was allegedly given another directive by the authorities of the church to join the couple who later arrived in a grey-coloured SUV, in holy matrimony.

I could have missed the sweetest soulmate, Man narrates how he found love in a cab 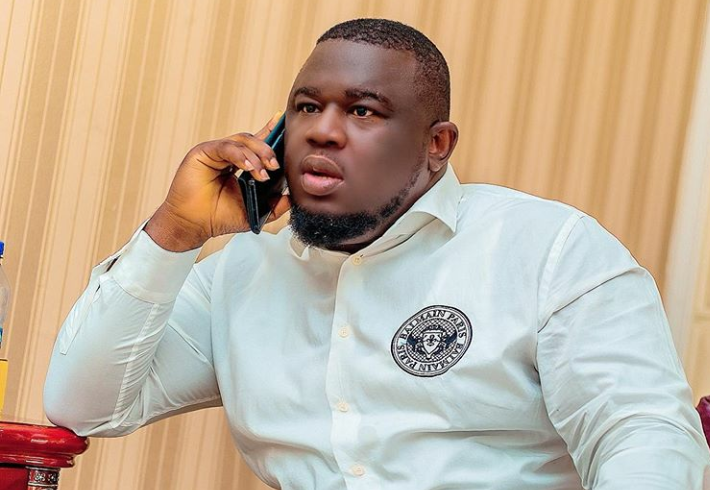 Music executive, Soso Soberekon has expressed his utmost disgust at the way marriages end so quickly after so much money was spent to attend the wedding and buy aso-ebi.

Soso said he spent 65,000 Naira to buy a couple’s aso-ebi in December 2019, paid for his flight ticket to attend the wedding in Enugu and back to Lagos.

After all the money spent, he heard that the couple “divorced” four days ago.

The artiste manager said any couple who expects him to buy aso-ebi that’s more than 1,500 Naira will have to sign an agreement with his lawyer to refund his money if they divorce.

READ ALSO: Fani-Kayode offers scholarships to 300 students in honour of his wife, triplets

Read what he wrote below;

I bought an ASO-EBI for 65k last year December and travelled all the way to Enugu from Lagos for the wedding. Paid my flight tickets to and fro, only for me to hear today that the couples divorced 4days ago!

Marriages don’t last more than 2 years this days, don’t know why. So from now on, anyone who brings ASO-EBI of over 1,500 for me; will sign an agreement with my lawyer….You divorce, you refund me my money with interest! 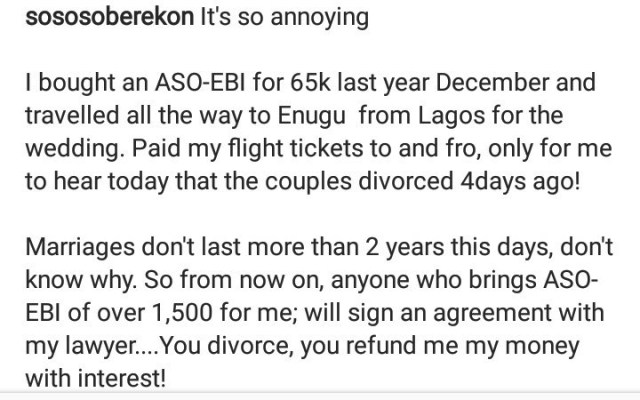 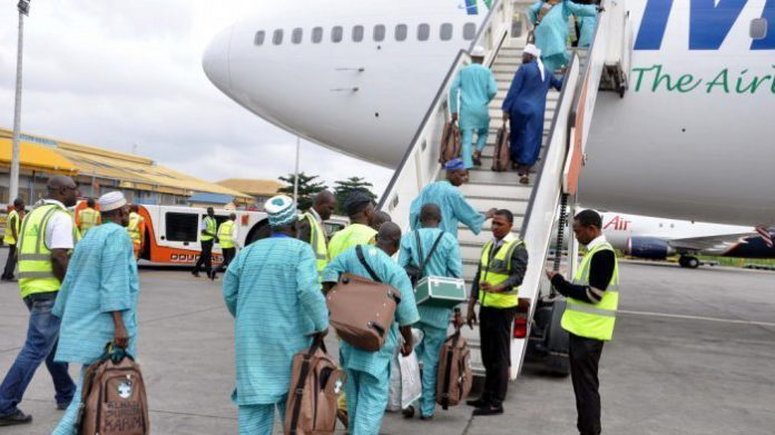 The Kwara Muslim Pilgrims Welfare Board has allayed fears of prospective pilgrims on cancellation for this year’s Hajj (pilgrimage) to Saudi Arabia.

The board is reacting to the Coronavirus (COVID-19) pandemic which has paralyzed socioeconomic and religious activities worldwide.

Alhaji Mohammed Jimoh, the Executive Secretary of the board, gave this indication during an interview with the News Agency of Nigeria NAN in Ilorin on Wednesday.

According to him, the Saudi Arabia Authority nor the National Hajj Commission of Nigeria are yet to make any pronouncement on the cancellation of the 2020 Hajj exercise.

“The Saudi Arabian Government and the National Hajj Commission of Nigeria have not made any official pronouncements on the cancellation of the 2020 hajj exercise,” he said.

The executive secretary, therefore, expressed optimism on the possibility of conducting the 2020 Hajj.

Jimoh, therefore, urged all intending pilgrims from the state for 2020 exercise not to lose hope of performing their spiritual retreat.

He gave assured that the board would not relent at giving current, timely, and accurate information regarding the 2020 pilgrimage to give the intending pilgrims first-hand information.

The executive scribe also advised the intending pilgrims and entire Muslims to intensify prayers to Almighty Allah to bail Nigeria and the whole world out of the COVID-19 protracted crisis. 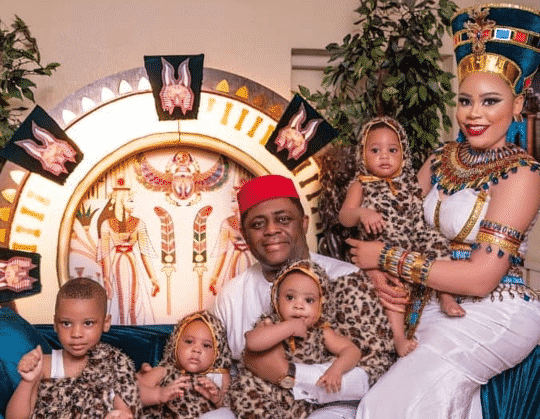 Former minister of aviation, Femi Fani-Kayode, says he will be offering scholarships to 300 Nigerians to study in a private university in the Republic of Benin, Icon University.

Mr Fani-Kayode on Wednesday disclosed that the scholarship is in honour of his wife, Precious Chikwendu, and triplets – Ragnar, Aiden and Liam – who celebrated their birthdays on Monday.

“I will award scholarships to 300 students to the top Private University in a neighboring African country over the next 2 years. Fees will be taken care of. This will be done under the auspices of Snowhite PureHeart Foundation which is owned by my wife @snowhitey1,” he wrote.

“To commemorate the birthday of my wife and 3 sons I am offering a scholarship to 300 Nigerian students to Icon University in the Republic of Benin. This is the top private university in Cotonou and they have just awarded me an honorary doctorate degree. I am deeply humbled.”

To commemorate the birthday of my wife and 3 sons I am offering a scholarship to 300 Nigerian students to Icon University in the Republic of Benin. This is the top private university in Cotonou and they have just awarded me an honorary doctorate degree. I am deeply humbled.