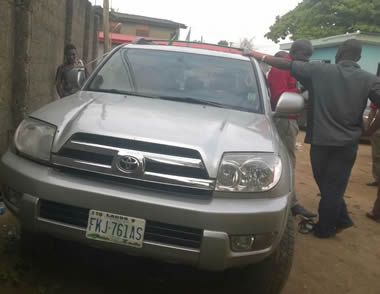 A 34-year-old man, Lucky Onofua, has been arrested in the Egbeda area of Lagos State after he allegedly posed as a Squadron Leader of the Nigerian Air Force and beat up a policewoman, who was controlling traffic.

It was gathered that Onofua allegedly beat up the female sergeant, whose name is yet to be known, for stopping his Sport Utility Vehicle at an intersection in Egbeda on Monday.

According to PUNCH the fake air force officer got out of his vehicle and flogged the policewoman.

It was gathered that in the commotion that ensued, the sergeant held onto the clothes of the fake officer.

An eyewitness said Onofua’s vehicle slightly hit the policewoman, who sprawled on the road and refused to get up.

It was learnt that the sergeant was rescued by some passersby who also put a distress call to the Shasha Police Division.

When the policemen got to the scene, Onofua, who hails from Irrua-Central Local Government Area of Edo State, was asked to identify himself, but he allegedly insisted that he was an air force officer.

He was said to have been taken to the police station where a call was put across to the authorities of the Nigerian Air Force in Ikeja, to ascertain his claim.

Two Wing Commanders of the Nigerian Air Force were said to have gone to the division to verify Onofua’s identity. The two officers said Onofua was an impostor.

A witness, who gave his name only as Emmanuel, said Onofua battered the police sergeant for daring to stop a “military officer’s vehicle.”

He said, “The traffic light is around a commercial bank on Egbeda Road. The area was busy. The policewoman asked the SUV to stop so that vehicles on the other side could pass. The man refused.

“The sergeant too became angry and stood in front of the vehicle. The man came down and began to flog her with a horsewhip. She held his clothes and began to tear them.

“Other motorists were afraid that it could lead to a free-for-all between security operatives and they alerted the Shasha division. That was how the man and the sergeant were invited to the station.”

A police source told PUNCH Metro that policemen at the division had invited Onofua, who was believed to be a Nigerian Air Force officer, to settle the matter amicably, only to find out he was a fake officer.

He said, “The Divisional Police Officer asked the suspect to come in so that they could talk like gentlemen. The DPO asked him to identify himself and he said he had forgotten his ID card at home. The DPO then secretly called an Air Commodore to verify the man’s claim. Two Wing Commanders from the Air Force base at PWD were thereafter sent to the division. That was how Onofua’s bubble burst and he was arrested.”

Our correspondent gathered that the suspect thereafter told the policemen that he had wanted to become an Air Force officer and that he had some friends in the force.

Policemen from the division on Tuesday reportedly went to the suspect’s apartment to check if he had guns or military uniforms in his possession.

She said, “The suspect will be charged to court for serious assault and impersonation. He allegedly hit the sergeant with his vehicle, and came down to whip the policewoman all over.

“The Nigerian Air Force authorities were invited and we discovered that the man was an impostor. We are currently investigating the matter.”

How AIT fired all its workers in Benin after owing two years salary
Former Commissioner ruins Fayose’s career, says he is incompetent