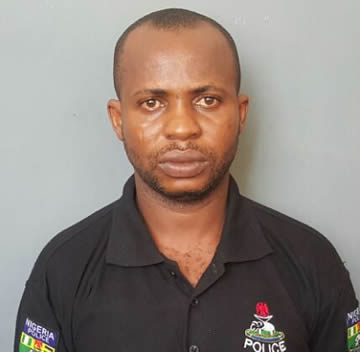 There are several ways to make cool money but the line chosen by 33-year-old Austin Okwuokei was too dangerous.

He chose to impersonate police officers in order to obtain money from the public.

Unfortunately for him, he was caught in the act by the Lagos State Police Command.

According to punch, the Ogwashi-Uku Delta State indigene was apprehended by policemen attached to the command’s monitoring team last Thursday at the Costain Roundabout, Iponri.

The suspect allegedly started extorting motorists in the state last year, after arriving from Edo State, where he had his family.

The suspect was arrested after complaints were made at the Lagos State Police Command Headquaters, Ikeja.

Okwuokei, in his statement to the police, allegedly confessed to the crime, saying he bought the “police shirt” in Edo State.

He said, “I am a married man and I came to Lagos in 2015.  When I was in Edo State, I bought the police shirt. I came to Lagos and started using it to make money by extorting money from motorists.

“Anytime I am on the road, I make an average of N10,000 within two hours. I actually wanted to be a policeman, but when I failed, I started doing this. I am also a commercial bus driver.”

The spokesperson for the Lagos State Police Command, SP Dolapo Badmos, said the command had been getting a lot of complaints from motorists and residents in the area concerning the activities of the suspect.

She said, “We had received a series of complaints from motorists and people living in that area that he had been extorting money from them. The Commissioner of Police’s monitoring unit was sent to the area to investigate and he was arrested in the process.

“He owned up to the crime and said he had been doing it since he came to Lagos last year. We have declared war on people denting the image of the police and we will make more arrests in the coming days.

“The command hereby appeals to members of the public to be vigilant and not part with their hard-earned money to anyone who claims to be a policeman or wears police uniform as the leadership of the Force abhors all forms of corruption.”

Badmos said the suspect would be arraigned in court at the end of investigations.