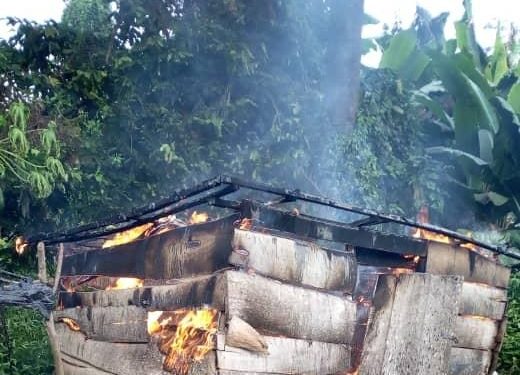 A 20-year old woman, who deals in petrol at the black market, has been burnt to death.

Mary Agada is said to sell petrol in small gallons in the community.

Different accounts were given as to how the fire exploded.

Some eyewitnesses said it was caused by kerosene explosion while she was trying to lit her stove.

Another witness said she kept fuel in her kitchen and was pouring fuel to sell to a customer when she was gutted by fire from a lit stove.

Her husband, Mr. Ahmed Agada, escaped death by the whiskers as he was with her in the kitchen when the incident occurred.

MORE READING!  Justice will catch up with you, Shiites tell El – Rufai

He was said to have quickly jumped out but his wife has already been caught up in flames.

Witnesses said he tried to rescue her but was prevented by the blazing fire and watched helplessly as his wife cried in agony till she died.

Her remains have been taken to Benue State for burial.

Edo spokesman, DSP Chidi Nwabuzor, said he was yet to be briefed on the incident.

Continue Reading
You may also like...
Related Topics:Edo, Fire

Germany to deport some Nigerians on Monday, many have psychological, spinal cord problems – Activist
Army advises residents not to panic as it begins 2019 shooting exercise