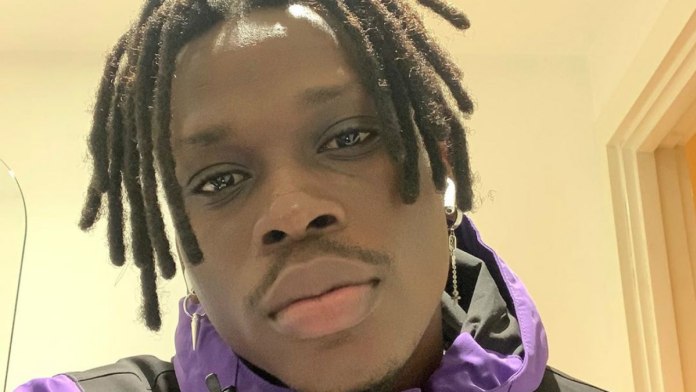 Adedamola Adefolahan aka Fireboy DML has released his debut album and it is everything fans prayed for and more.

The Afropop Nigerian artiste, who is signed to Olamide Adedeji’s YBNL, delivers a mixture of emotions in the album, ‘Laughter, Tears and Goosebumps’ (LTG).

From the first song to the last, it is clear that Fireboy DML wants you to get all up in your feelings and he sure brings the heat with this intentional body of work.

The singer has been winning hearts and charts ever since he came into limelight with his hit single ‘Jealous’.

Not relenting from the success of ‘Jealous’, the 23-year old YBNL signee is a proven songwriter with releases of good music such as ‘What If I Say’ and ‘King’.

This is not surprising, considering that the youngster is being mentored by Olamide, one of the best and most prolific in the industry.

For a first studio album, Fireboy is daring as ‘Laughter, Tears and Goosebumps’ comes with no guest features.

This is a break from the norm that sees new artists tending to overkill their first major projects with guest appearances.

On the first song, ‘Wait and see’, he emphasises on sacrifices, hard work and prayers that got him to this stage in his music career.

He speaks on his uniqueness and how no one can be like him. The song, produced by ace producer Pheelz, had excellent sound that helped his voice texture.

On ‘High on Life’, he is talking about his life as a melody, also making money, life and making a memory with his songs.

However, it would have done justice if he had given better insight to life other than emphasising on the high life he craves. Somehow, the lyrics should have run deeper than they currently run.

For ‘Gbas gbos’, the melodious tune had nothing to do with the song title as he spends a bulk of it talking about a girl he refers to as Mamacita. He asked her to come over to dance and the song thrives on rhythm.

On ‘Omo Ologo’, we see Olamide/Zanku’s influence on this song, a type of song that makes you stand and dance on the dance.

It depicts that he is the type of guy with shining star and “they cannot stop his shine.” Similar vibes are felt on the next single, ‘Scatter’.

For ‘Need You’, Fireboy shows off the strength of his voice on gentle guitar riffs as he serenades his love interest with lines such as “You sweet pass mango, you sweet pass agbalumo/No know where I wan go, omo mi o ma gbadun mo”. A gentle song for lovers and for reminiscing great moments.

That Fireboy has a signature, catchy sound is no news and the nature of ‘Energy’ proves that.

The song pulls a feeling that is usually felt when hanging out with friends on cool evenings, talking over life.

Classic Fireboy also infuses some lyrics serenading his lover and praising her for her energy.

‘Jealous’ was the perfect song to end the album as it was the song that catapulted his amazing career.

His album arrangements and the songs prove that Fireboy cares about the feelings of his audience and is not afraid to write songs that show his emotions. The album is a solid four out of five.

Continue Reading
You may also like...
Related Topics:afro-pop, album, Fireboy

R. Kelly slammed with fresh charges of bribing official to marry Aaliyah at 15
I am coming home with the Grammy, when I come back we go reason, Burna Boy says [Video]