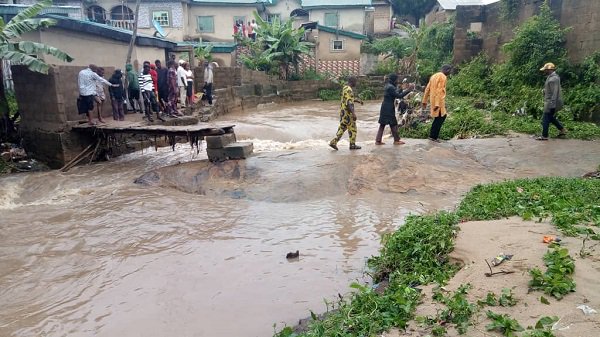 A final-year student of the Adekunle Ajasin University, Akungba Akoko, Ondo State, Doyinsola Boluwade, was swept away by a flood in the town on Monday.

Boluwade was said to be studying at the Department of Religious and African Studies in the institution.

It was gathered that the victim was swept away by flood while she was going to her place of residence during a downpour.

“The non-stop rainfall brought tragedy upon the university town yesterday (Monday) evening when an undergraduate was swept away to an unknown destination by flood at a canal very close to her place of residence,” a source said.

Confirming the incident, the landlord of the victim, Mr Ademola Elemukona, said he narrowly escaped being swept away as he climbed a cocoa tree when the flood was getting uncontrollable.

“Many people thought I had been swept away by the flood, but I thank God that I survived it,” he stated.

He said a search party had been organised by the school management to locate the student, but as of the time of filing this report, she had yet to be seen.

“The water level is very high and we don’t have professional divers, who can enter the river. But we have contacted the National Emergency Management Agency and some other agencies to assist us find her. As I am talking to you, we are at the scene of the incident seeking solutions,” Akinpelumi said.

The Ondo State Commissioner for Agriculture, Mr Gboyega Adefarati, who visited the scene of the incident, warned the residents to stay away from the canal.

In his reaction, the monarch of the town, the Alale of Akungba, Oba Sunday Ajimo, called on NEMA, the federal and state governments to come to the aid of victims of the flood, which he said destroyed some properties.