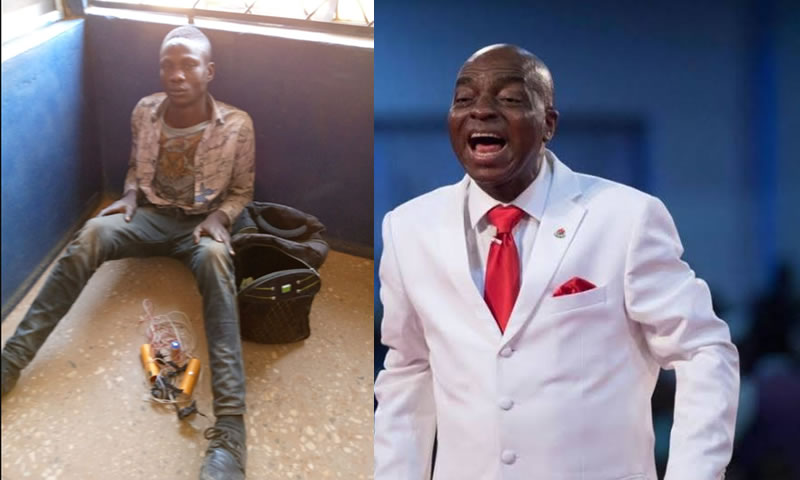 Bishop David Oyedepo, the Founder and General Overseer of Living Faith Church, a.k.a Winners’ Chapel, has placed a curse on those responsible the attempted bombing of a brach of the church in Kaduna.

WuzupNigeria reports that the Kaduna State Police Command had on Sunday arrested a suspected suicide bomber inside a church located at Sabon Tasha in Chukun Local Government Area of the state.

There have been controversy about the identity of the bomber, while the Christain Association of Nigeria [CAN] in the state claimed the suspects was a Muslim named Muhammed Sani, the state Police Public Relations Officer (PPRO), DSP Yakubu Sabo, claimed the suspect is named Nathaniel Samuel, a Christian from Bauchi State.

Not fazed by the identity of the suspect, Bishop Oyedepo, on Monday, at the Church’s Covenant hour of prayer, said Nigeria has never been this vulnerable.

The cleric who boasted that God confirmed his prayers said woe to anyone involved or connected with the callous killings in the country.

He decreed that the generation of members of Boko Haram, Miyetti Allah is cursed.

”The most irresponsible, most murderous system, is what we have today and in the name of Jesus by the Apostolic authority upon my life and Prophetic seal on my forehead, your end has come.

”We are here this morning to celebrate Jesus for delivering us from so great a death’.

”There was a failed attempt to bomb one of our Churches in Kaduna yesterday.

”This agent of the devil already entered the premises, found his way to the toilet, (but “who delivered us from so great a death” wink, was accosted and arrested.

”To tell this Nation as they would expect me to do, the last straw that will break the back of everybody in authority, backing these callous killers has come.

”To tell everyone behind this: your days are numbered. This prophet is saying the Kingdom is taking away from you. It’s impossible for these killers to be on the loose without some authorities backing them up.

”So many precious lives have been wasted in the last 2 weeks and in the name of Jesus, the generations of those involved is declared wasted.

”I don’t care: Boko Haram, Miyetti Allah, whatever name you are called, I decree the curse of the Lord upon you now.

”Everyone in government, everyone in security services, that is behind these killings: YOUR END HAS COME.” he added.