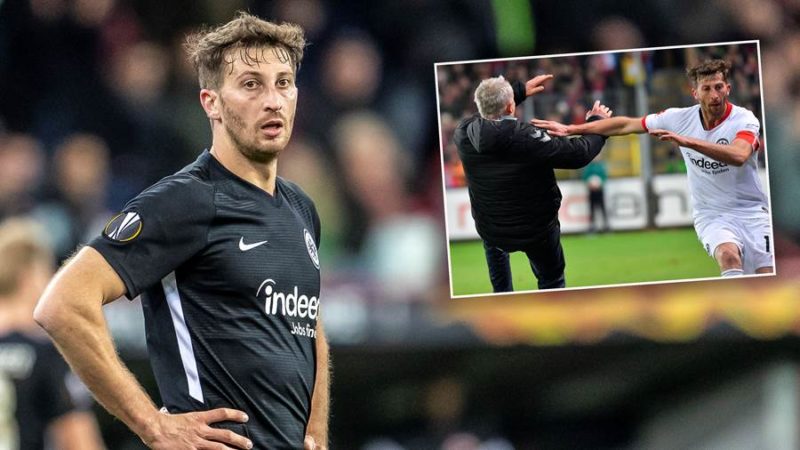 The captain of Eintracht Frankfurt, David Abraham, has been handed a seven-week suspension and a $27,500 (€25,000) fine for barging into an opposing team’s manager.

The defender knocked Freiburg’s coach Christian Streich to the ground during his side’s 1-0 defeat in the German Bundesliga, sparking a mass brawl between the two teams.

After deeming that Abraham was guilty of “assault on the opponent,” the German Football Association’s (DFB) banned the 33-year-old from November 10 until December 29.

The punishment means Abraham won’t feature in the Bundesliga again in 2019, the league’s winter break starts on December 22.

The ban doesn’t apply for the Europa League.

Freiburg midfielder Vincenzo Grifo, who was also shown a red card for his involvement in the brawl, has been given a three-game ban.

Frankfurt announced they intend to appeal against the decision. Two red cards, a mass brawl, and a coach lying flat on the floor by the touchline it wasn’t your average end to a football game.

The Bundesliga match between Freiburg and Eintracht Frankfurt descended into mayhem after Abraham knocked Streich to the ground as his side trailed 1-0 in injury time.

As Abraham was running to collect the ball for a throw-in with his team searching for a late equalizer, he made a beeline for Streich, bumping the 54-year-old to the ground in the process.

A melee ensued, after which Abraham and Grifo, who had been substituted earlier in the match, were both sent off.

“David Abraham is a very emotional player,” said Streich. “He ran towards me at full speed, wanted to grab the ball and score a goal somehow. I couldn’t avoid him, and he ran me over. That’s all.

“We should all calm down now and stop talking about this thoughtlessly. Football is a contact sport even though the implementation was clearly in the wrong place.” Frankfurt board member Fredi Bobic said that Abraham had been provoked, but that didn’t excuse his actions.

“It’s a shame that an otherwise decent game had to end like that,” said Bobic. “What exactly happened will stay amongst those involved. The fact is that there will be consequences for everyone.”