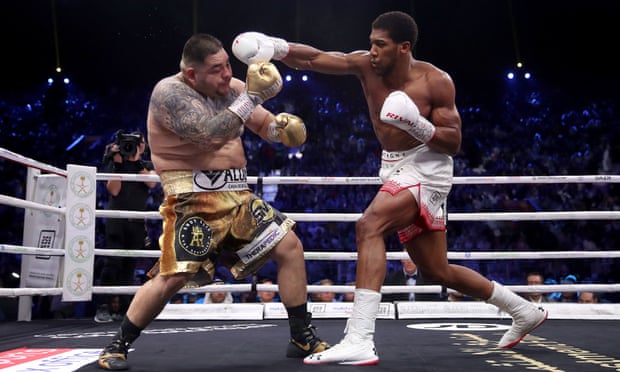 British boxer Anthony Joshua celebrates after winning the heavyweight boxing match between Andy Ruiz Jr. and Anthony Joshua for the IBF, WBA, WBO and IBO titles in Diriya, near the Saudi capital on December 7, 2019.

Anthony Joshua’s turbulent year ended in triumph in Saudi Arabia in an epic second showdown with Andy Ruiz and soon fight fans will be treated to another rematch in February when Deontay Wilder and Tyson Fury go to war a second time.

The debate about who is the best heavyweight on the planet will continue to rage on until the best go toe-to-toe and here Metro UK ranks the top-performing fighters in the division after a crazy 12 months.

As the reigning WBC champion and the most in-form heavyweight, Wilder just about pips Fury to top spot. Two wins and two chilling knockouts in 2019 have many people jumping off the fence and pitching their tent in camp Wilder, especially in light of Fury’s last performance.

Fury should really be sitting top of this list as WBC champion, but instead, it feels the Gypsy King might be up against it when he faces Wilder next year. Tom Schwarz and Otto Wallin are two of the lowest hanging fruits in the heavyweight division and Fury’s eye injury in his last fight came as a direct result of sloppy defence. Fury has the incredible knack of rising to the occasion, but the display against Wallin suggests the British heavyweight has slowed down, even if only by a fraction of a second.

Joshua’s sweet revenge against Ruiz means the three-belt holder is a two-time unified champion and back on track to confirm himself as the undisputed king. Wilder and Fury set a new bar in their classic 2018 blockbuster and Joshua can now set his sights on reaching, and perhaps surpassing, that standard.

Dillian Whyte ended the year on a high against Mariusz Wach, just a day after he was cleared of any wrongdoing by UKAD. An adverse finding in a June test has derailed Whyte’s bid to challenge Wilder and the 31-year-old will now have to wait until early 2021 until he can challenge for the WBC belt and stake a claim for the top spot.

The former unified champion came out of nowhere this year and can still count himself among the best in the world after two fights with Joshua. Ruiz admitted he was comprehensively beaten by Joshua and promised to rediscover the form that captured him three world titles in 2020.