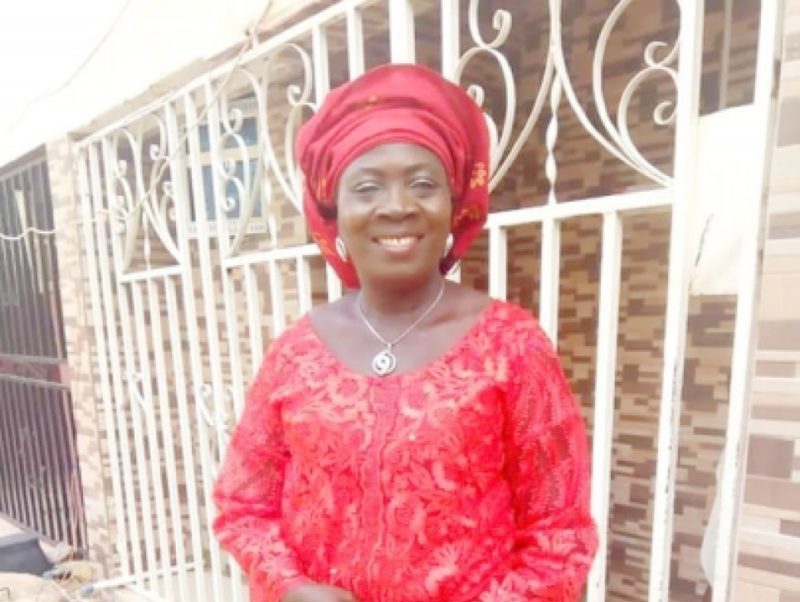 Salome was burnt alive by hoodlums – suspected to be political thugs – in her home on Monday.

Elder Simeon, in a statement shared by an online medium, Persecond News, appealed for justice over the loss of his wife and properties.

He added that his Late wife was resting from an earlier attack on her Saturday when the house was surrounded and set on fire.

My attention is being drawn to various stories both offline and online regarding the sorrowful death of my beloved wife, Hon. Mrs Salome Acheju Abuh, on Monday the 18thof November 2019 which happened at Ochadamu Ofu Local Government Area of Kogi State Nigeria. I am constrained to set the records straight, despite the heaviness and pain I feel this period.

My wife, a devout Christian, a lover of peace who hates anything violent was a grassroots politician/community leader. She was a women leader for the Peoples Democratic Party (PDP) from the early years of her political career. She had her first elective position as an Honorable councillor in Ofu Local Government Council of Kogi State Nigeria between 2003-2007, she contested for Idah Federal Constituency for House of Representative in (2007) and was the only woman among the contestants, she was also a Special Assistant on Grassroot Matters to His Excellency Capt. Idris Wada, (the then Executive Governor). She also contested in the last general elections for the State House of Assembly In 2019, all under the PDP platform. Until this unfortunate incidence, she was an active member of the party, a campaign team member for Engr. Dr. Musa Wada and the PDP Woman leader.

On Saturday 16thof November 2019, at the Ochadamu primary school polling unit, one Ocholi Edicha in the company of other boys told me that he was going to deal with my younger brother, Gowon Abuh, who is a strong supporter of the PDP, that He (Ocholi Edicha) and others were in the payroll of GYB 4+4. He (OCHOLI EDICHA) further said that this election is for the APC and there is nothing that anyone can do about it. I politely told him that there was no need for this that we are all brothers, we all drank the same flowing river, went to the same playing ground in the community and we shall still remain in the same community, politics notwithstanding. After casting my vote, I headed home, leaving my wife behind to watch the electoral process. After some time My brother Gowon ran back home to inform me that “ Ocholi Edicha was beating my wife where she was sitting under a shade observing the process and when He (Gowon Abuh) and other people tried to intervene, He (Ocholi Edicha) attempted to stab him Gowon Abuh and he had to run back home”. As we were still talking one Elder Samuel Salami Agbali brought my wife on his motorcycle to our compound and advised that we rush her to hospital. I took her to Holy Memorial Hospital Ochadamu where she was attended to by one Dr. Agama. She was examined and was given some drugs to take and advised to rest due to the trauma of the attack.

After the election, I returned to Abuja where I reside leaving her behind to rest for a few days as advised by the doctor. I was constantly on the phone with her. On Monday 18thof November at about 12am my younger brother from Lokoja, Pst. Mark Abuh, called me that there was trouble at home. That Ocholi Edicha and others were in a drinking joint close to our house boasting on how they were going to deal with Gowon our younger brother who narrowly escaped from their attack on Saturday. According to his report Solomon, Gowon’s Son overheard their boasting and pleaded with them on his father’s behalf to forget about the incidence. At this point one of them, Zekeri Awalu picked up a bottle and started pursuing Solomon, while pursuing Solomon he tripped and fell on his own knife which was stocked around his waist and unfortunately injured himself on the thigh while Solomon ran home to inform his father (Gowon Abuh) of what had ensued meanwhile, Zekeri Awalu was rushed to Holy Memorial Hospital at Ochadamu.

After the conversation with my Brother pastor Mark Abuh, I immediately put a call home to Ojonugwa Alhassan my Cousin who told me he was at the hospital where the injured person was being attended to. According to him, the hospital, after administering first aid treatment was requesting a police report before further treatment. While the doctors were waiting for the police report the friends of the injured got agitated and moved him to another hospital where he lost his life.

When the news of his death filtered into the town, angry APC Supporters came to the town chanting GYB 4+4, and shooting sporadically. People scampered for their lives and the APC Supporters headed to my house where my wife was resting unaware of what was happening in the community, the supporters surrounded my house shooting sporadically and further set the house ablaze and burnt my wife to death and completely burnt down the entire buildings in my compound. Afterwards, the APC supporters headed to four other houses in the community who are known PDP Supporters and burnt down their houses.

Let me conclude here, that the attack on my wife on Saturday was a premeditated one and carried out on Monday 18th November 2019 when my wife and mother of my children was resting in our family house.

I hereby appeal for justice to prevail over this gruesome murder of my wife and loss of properties.