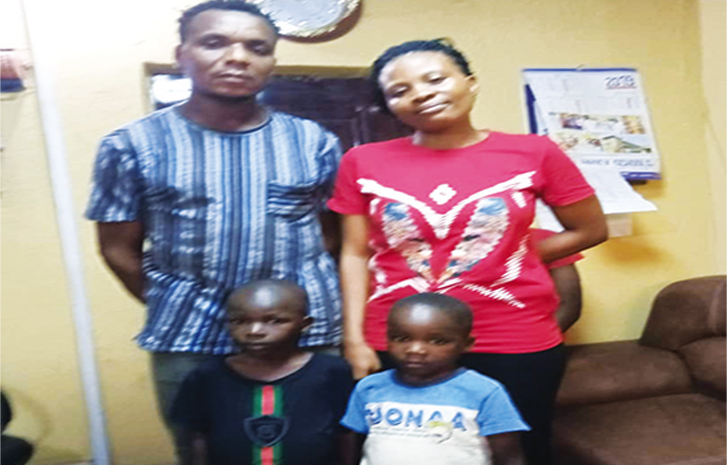 Happiness Chukwunoso, 40, and his wife, Blessing, confessed to having bought the kids for N140,000 from one Mama Oyoo of Jos township

A man, Happiness Chukwunonso, and his wife, Blessing, have been arrested over their alleged involvement in child trafficking.

Blessing was arrested at a motor park at the Alaba International Market, Ojo, Lagos State after she failed to give coherent answers when accosted by policemen attached to the Ojo Division of the state’s police command.

The Lagos State Police Public Relations Officer [PPRO], Bala Elkana, said in a statement on Sunday, said Blessing had wanted to board a bus to Onitsha with two children when detectives, led by the Divisional Police Officer, Ojo Division, Abdullah Malah, accosted her at the motor park.

He stated that during interrogation, Blessing claimed that her husband adopted the two children from a motherless babies’ home in Jos, Plateau State, adding that she was taking them to Happiness in Onitsha, Anambra State.

Happiness reportedly confessed to having bought the kids for N140,000 after he was arrested.

“On Thursday, October 31, 2019, around 8.30 pm, acting on information from a credible source, detectives from the Ojo Division, led by the DPO, Abdullah Malah, arrested one Blessing Chukwunonso, 30. She was seen around the Alaba International Market with two children, Joshua James, 6, and Samuel Gbawune, 3, trying to board a vehicle to Onitsha, Anambra State.

“Upon questioning, she claimed that the boys were adopted by her husband, Happiness Chukwunoso, 40, from a motherless babies’ home in Jos, Plateau State, and brought to Lagos State. She said she was taking them to Onitsha to meet her husband.

“On Friday, November 1, 2019, around 7am, the said husband was also arrested. He confessed to having bought the kids for the sum of N140,000, from one Mama Oyoo of Jos township.

“The kids were recovered. Efforts are in place to identify their parents and reunite them. The command calls on motor park operators, unions and well-meaning Nigerians to keep an eye on passengers with kids, who appear in a suspicious manner.”