Oloni is back again with her weird relationship questions and her mob of followers too won’t cease to amaze with their bizarre reactions.

Some of Dami Olonisakin popularly known as Oloni’s weird relationship questions have made Twitter trending topics severally and also made headlines on top news sites in the United Kingdom – Mirror UK, HuffPost among others.

Just a few weeks ago she sent the social media into a frenzy when she asked her followers to share with her if they had ever used ‘charm’ on their partners before, the scary revelations caused panic among men on Twitter.

A lady had said she used her menstrual blood to cook for her then cheating boyfriend when they were in the university, well they are married now according to her, suggesting that what she mixed in the man’s food actually worked.

Oloni took to Twitter again on Wednesday asking her followers to share the craziest thing they ever did after their partners broke up with them.

“What’s the craziest thing you did because of a break up?”

As usual, the mob of followers had started pouring out their stories before she took down the tweet.

One of the ladies who had responded before the tweet was deleted gave a shocking revelation that could make her ex-boyfriend rot in jail if he is not sentenced to death.

“Was gonna commit suicide just to frame him for murder. The breakup was rough.”

“He was my first boyfriend and he cheated with a friend. Love makes you crazy.”

READ ALSO: Man narrates how singer ‘lost battle with his demons’ two years after he saved him from depression

Oloni herself was so shocked by the revelation as she quickly asked the lady to delete it. 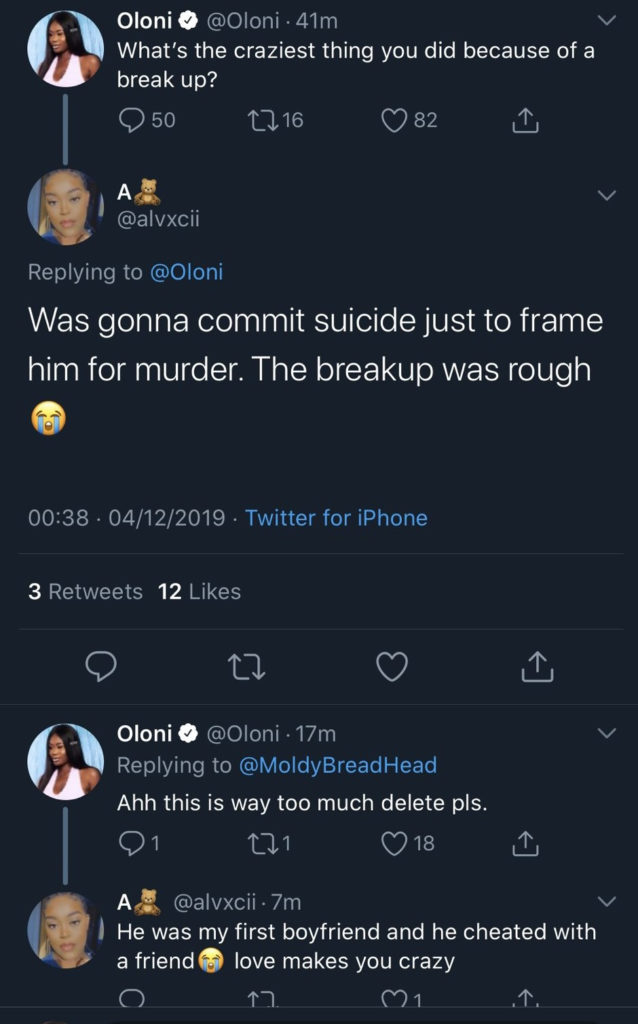 Another lady said she attempted razing her ex-boyfriend’s home with his family members inside.

Didn’t do it. But wanted to burn their house down. Lol With their grandma inside….. pic.twitter.com/ZndoOa8njd

Many have already shared their stories and this time it’s not just the ladies, the men also have tales to tell about breakup.

Told area boys to collect the phone I bought for her🌚

Femi who could not do the unthinkable by taking an extreme action wrote:

I was hospitalized for a week for breathing too high🙄,while I was there,I was busy thinking he will come 🤔😩,for where?!!!!!!!!!

How does “writing on an 800 page note book full of where did I go wrong” sound to you?

I got to Nigeria 11pm Friday, got to my house about 1am and by Sat 8am, I was outside her gate in Ibadan calling someone to call her that I’m outside cos she won’t pick my own calls.

I sneak into the girls room to steal back the iPhone 6 i bought her .. I had to use android till now for her to know i never stole the phone n she actually lost it herself🤣

I stole pictures of girls both known and unknown😂, post it on my whatsApp status just for her to c.. Posting atleast 12 pics a day. Congratulating d girls and thanking them for making me happy. 😂🤣
Went to a strip club made a video too. 😀

I called customer care and begged them to please tell me the number he talks to the most 🤣just so I can call the girl and know who she is
The guy said no,I kept on begging till he hung up