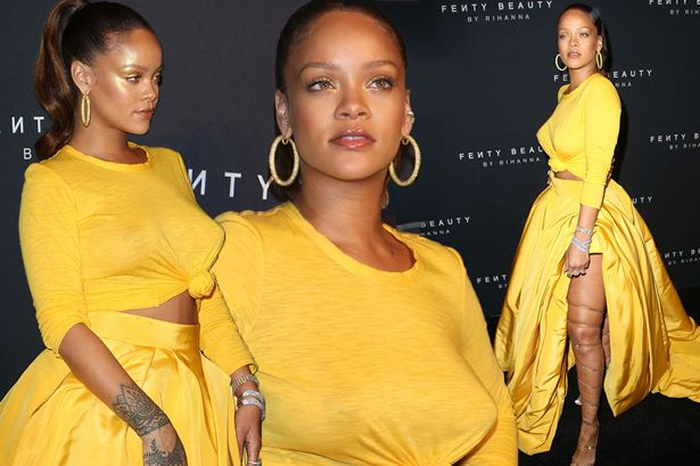 American superstar singer Rihanna set the social media abuzz on Friday with her comment on motherhood at her 5th annual Diamond Ball on Thursday night.

In a red carpet chat with Essence Magazine before the event, the superstar had spoken about giving birth to a black woman, leaving fans in a puzzle.

Fans became more worried and concluded the singer is pregnant after spotting what looked like a ‘baby bump’ during her performance later that night at the fifth annual Diamond Ball.

That was how the gossip mill got spinning since Thursday night.

She told Essence in the now-viral interview:

“That’s who I am. It’s the core of who I am in spirit and in DNA. And I always stand up for what I believe in and who I love and who I know, who I respect.”

And that one mention about giving birth has sent social media into an absolute frenzy, with fans now believing the 31-year-old singer subtly confirmed she’s pregnant with her first child.

@badgalriri on Black women: “We are impeccable. We’re special and the world is just going to have to deal with that.” #DiamondBall

me seeing that Rihanna is pregnant then realizing that I’m not the baby:pic.twitter.com/asRmNBO8iK

Rihanna is Pregnant. Who is the father?

Rihanna is NOT pregnant and this is proof look at the first two pics of Rihanna when she’s not singing and then look at the last picture of Rihanna singing how is the “bump” showing that hard only when she sings the girl has gone thick so when she sings her stomach pushes out pic.twitter.com/0xSkhMg1sy

Imagine if Rihanna is just bloated and not pregnant. How rude of us… pic.twitter.com/Dimn5KuetJ

Me all day since finding out Rihanna preggo pic.twitter.com/f6lxzWkUHN

We need #Siyamitha2019 press brief from Rihanna, she can’t do this to us. pic.twitter.com/JBNaJfohCd