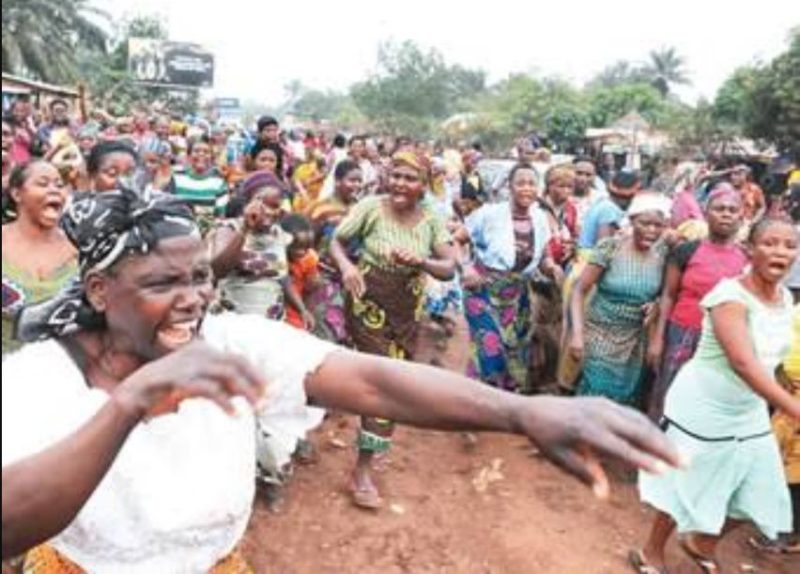 Hundreds of women in Agasha in Guma Local Government Area of Benue State Wednesday took to the streets to protest the alleged rampant mysterious disappearance of both male and female sex organs in the area.

The report of vanishing organs, based on a claim by a villager who simply identified himself as Donald, had been a recurring decimal in the local government since the beginning of November.

Speaking to newsmen, Donald revealed that no fewer 15 people both male and female were reported to have fallen victims of the mysterious incident.

“Some of the victims have been moved to a priest in Ameladu, a  village near Gboko local government area for healing.

“Since sex organ disappearance  continued, the community leaders have reported the case to the police.

“I think the women decided to make their grievance known to the public which warranted the protest,” he explained.

Meanwhile, the police command in the state have denied the report of missing organs.

Reacting, the state Command’s Public Relations Officer, DSP Catherine Anene said that there was no incident of such in the community.

DSP Anene stated that the command actually received a report from the community on the alleged organs disappearance but said that no one in the community could show evidence that his or her organ had disappeared.

The Caretaker Committee Chairman of Guma LGA, Anthony Shawon, said there was no evidence to justify the claims of missing organs.

“I was there (Agasha) two days ago and held meetings with the traditional rulers, elders, youths and women groups among others of the community about this matter.

“They brought 14 people whose organs were allegedly missing from a Catholic church where they were now receiving prayers for restoration.

“And I asked the Reverend Father if he had confirmed that their genitals were missing and the Father said he hasn’t inspected them but praying for them. I then physically inspected two of them and found their manhood intact.

“I don’t know what this is all about. In fact, I’m not involved. Maybe they are reasoning spiritually.

“None of the women making the claims agreed to be inspected. We have held a series of meeting even today (Wednesday) with the elders. “I’m told that five members of the community who they (villagers) are suspecting have been arrested as we speak and taken to the police headquarters. But, there are no evidence to justify these missing manhood,” the LG chairman said.