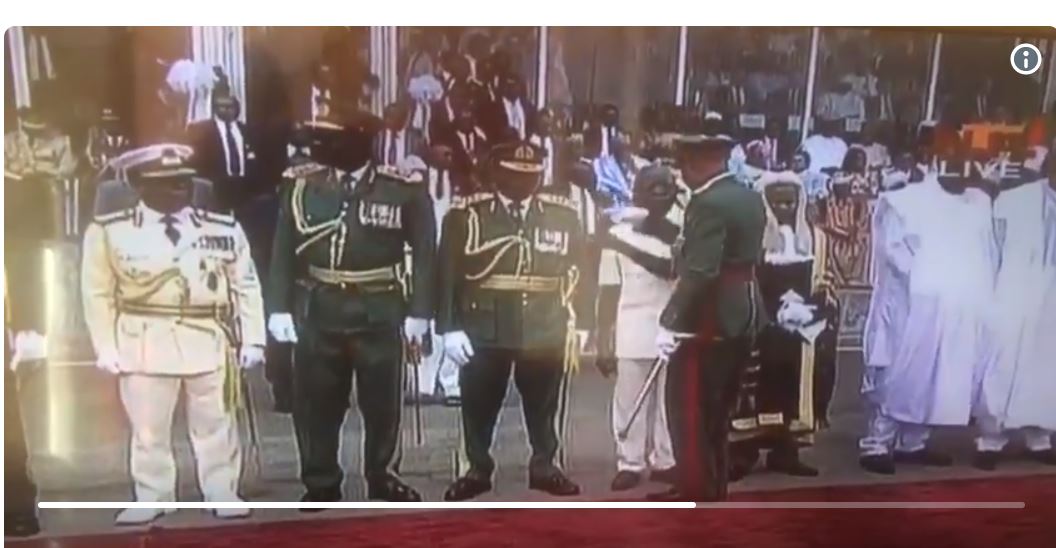 The National Chairman of the All Progressives Congress, Adams Oshiomhole, has become a trending topic on Twitter after he breached protocol during the 2019 Inauguration ceremony at the Eagle Square on Wednesday.

The excited Oshiomhole who stood by the CJN had hoped to shake hands with President Muhammadu Buhari when he passes through but was ordered to return to his seat by the Commander Guards Brigade, Brig. Gen Umar Musa.

The clip which was captured on live TV broadcast has since generated criticisms on Twitter with many rebuking the APC national chairman for being too forward.

Many also accused him over being overzealous adding that he was a governor for eight years, therefore, he should be familiar with official protocols.

Some also described the moment as a “huge national embarrassment” while using memes to describe Oshiomhole’s reaction when he was sternly ordered off the red carpet were other key government officials stood.

MORE READING!  You common men have no voice in Nigeria, 'rich man' tells Lagos photographer after bashing his car

Several dignitaries who had a vital role to play in the inauguration include; The Chief of Defence Staff, Gen Gabriel Olonisakin; the Chief of Army Staff, Lt.Gen Tukur Buratai; the Chief of Air Staff, Air Marshal, Sadique Abubakar; Chief of Naval Staff, Vice Admiral Ibok Ibas

Others lined up were the Inspector-General of Police, Mohammed Adamu; and the acting Chief Justice of Nigeria, Justice Tanko Muhammad, who administered the oaths of allegiance and office to the President.

See the video and comments:

Adams Oshiomole was a Governor for 8yrs, he’s been witnessing official protocols. What a huge national embarrassment he got today! pic.twitter.com/ZxXbDeosZZ

The number does not tally who is not suppose to be in the line?😂😂🤣🤣🤣🤣
Sir, its Adams Oshiomole! pic.twitter.com/vtuog7pbDH

Adams Oshiomole (or is it Oshiomhole?) never knows where to draw the line.

This is not an APC campaign flag-off!

Shocked he wasn’t adamant on that occasion!#DemocracyDay #Inauguration2019

“Remove me as chairman and I will tell Nigerians how 2019 elections was rigged” …Adams Oshiomole pic.twitter.com/0SEoffNIQt

They have transferred the aggression on Adams Oshiomole for breech of protocol.

What was in Adams Oshiomole’s mind when he stood beside the service chiefs at the Eagles square?? Guess He thought that was @OfficialAPCNg Mega Rally or Party gathering.. He forgot that it’s a swearing in ceremony.. I like they way he was politely corrected.

Adams Oshiomole couldn’t believe what happened to him today.This is the begining Mr Oshiomole,the people you are appeasing do not take prisoners….🤣🤣🤣🤣🤣🤣 https://t.co/YwmI3exPww

Adams Oshiomole is the President of the 4th arm of Government and commander in chief of the stolen mandate.