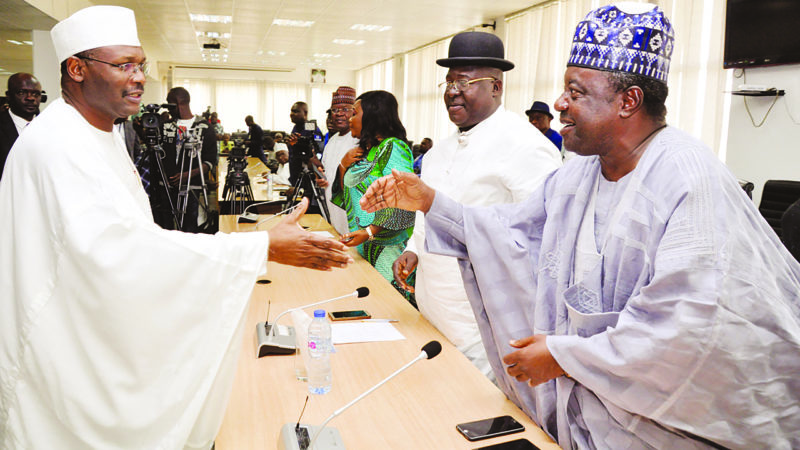 Those sworn in are Dr Alalibo Johnson from Bayelsa, and Dr Umar Gajiram from Borno.

INEC Chairman, Prof. Mahmood Yakubu, at the ceremony, said that Johnson would be deployed to Cross River to replace the former REC of the state, while Gajiram replaced the former REC of Taraba, who died a few months ago.

Mahmood congratulated the new RECs, advising them to discharge their responsibilities in line with the constitution and laws guiding the commission.

“In doing so, you must maintain the required openness and consultation. At the same time, you must be very firm in the discharge of your responsibilities,” he said.

Johnson holds a BSc degree in Political Science and Masters and Doctorate degrees in Peace and Conflict Studies.

Until this appointment, he was a Lecturer at the Niger Delta University in Bayelsa.

Gajiram holds a Bachelor degree in English Language and a Masters degree in Public Administration.

He served in various capacities in the Borno State civil service until his retirement as a Director.

Mahmood also spoke on the commission’s readiness for the Saturday court-ordered rerun elections in 11 states, and said that there would not be substitution of candidates in the affected elections and constituencies.

He said that there would be no substitution of candidates because they were not bye-elections but court-ordered re-run elections and that the period for nomination of candidates had lapsed since the end of 2018 in preparation for the 2019 general election.

“In all the constituencies, the elections will be contested by the same political parties and candidates that participated in the 2019 general election except where the elections were nullified on grounds of candidate disqualification,” Mahmood added.

The INEC chairman assured Nigerians that the commission was ready for the re-run elections.

“All sensitive and non-sensitive materials have been deployed to the States, stakeholders’ meetings have been held, security arrangements are being finalised while training and posting of ad hoc staff as well as the configuration of Smart Card Readers are ongoing.

“Where the elections involve entire constituencies, National as well as some Resident Electoral Commissioners will be deployed.

“The Commission will work with the security agencies to ensure adequate protection of election officials, accredited observers, the media and the processes against acts inimical to the conduct of peaceful and credible elections.

“We have received assurances from the security agencies of adequate protection of the processes in line with the rules of engagement for election duty,” Mahmood said.

Johnson, speaking on behalf the new RECs, said that they were grateful for the opportunity given to them to serve Nigeria.

He pledged that they would work with the commission in executing the mandate given to it be the Constitution of the Federal Republic of Nigeria, which was to conduct credible elections.

“We shall ensure free, fair and credible elections in Nigeria.

“We will also work to deepen and sustain the democracy of Nigeria,” Johnson said.