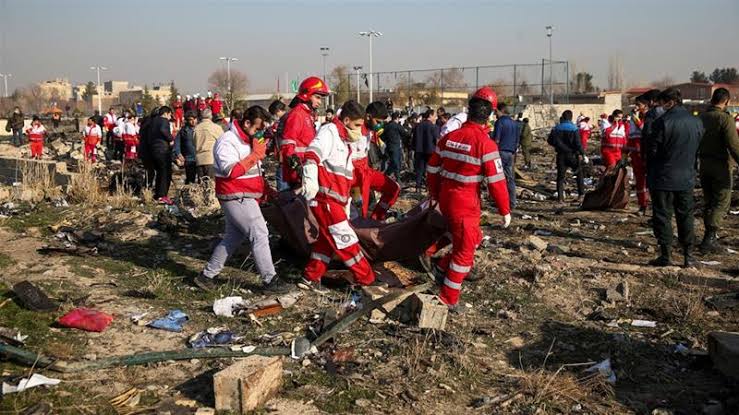 Iranian and Ukrainian officials have begun investigating the crash of a Ukrainian airliner near Tehran, Iran’s Aviation Authority said on Friday, amid mounting claims the jet was shot down.

All 176 people on board the Ukrainian International Airlines (UIA) Boeing 737 airliner died when it crashed in a field shortly after take-off on Wednesday morning.

Iran maintains that the plane went down due to a technical problem, while Western allies, led by the U.S. and Canada have said Iran likely shot downed the plan, possibly by accident.

The incident occurred hours after Iran fired missiles at U.S. bases in neighboring Iraq in retaliation for the killing of a top Iranian general in a U.S. airstrike.

Most of the victims were Iranian and Canadian citizens.

Canadian Prime Minister Justin Trudeau has said that evidence suggests the airliner was downed by an Iranian surface-to-air missile.

Iran’s top aviation official said an investigation would determine what caused the crash, but that he was certain a missile was not the cause.

“We can state it with certainty that no missile has hit this aeroplane,’’ Ali Abedzadeh said at a press conference in Tehran, according to Iran’s Press TV.

“The plane was flying for over one-and-a-half minutes while it was on fire and the crash site shows the pilot had decided to return to the airport,’’ Abedzadeh said.

Ukrainian President Volodymyr Zelensky has remained cautious, saying the missile scenario has not been ruled out.

“We call on all our international partners, especially the U.S., Canada and Britain to present any evidence pertaining to the catastrophe,’’ Zelensky said in a statement.

U.S. Secretary of State, Mike Pompeo, said on Friday it is “likely that that plane was shot down by an Iranian missile’’.

“We’re going to let the investigation play out before we make a final determination,’’ Pompeo said during a press conference.

He added: “When we get results of that investigation, I am confident we and the world will take appropriate actions in response’’.

The European Aviation Safety Agency (EASA) advised airlines in the meantime to avoid flights through Iraqi and Iranian airspace.

Ukrainian state media initially reported that the most likely cause was an engine fire.

Investigators are concentrating on the damaged black-box flight recorders recovered from the crash site.

Abedzadeh said Iran will try to download the data but, if unsuccessful, will turn to other countries for help.

Ukrainian investigators have been considering several possible scenarios, including that the plane could have been hit by a Russian-made Tor missile.

Some of those investigators were involved in determining that an anti-aircraft missile shot down Malaysia Airlines Flight MH17 over eastern Ukraine in 2014.

The European Commission refused to speculate about a possible cause of Wednesday’s crash, saying it would await the findings of the official investigation.

A spokesman for the EU executive called for an “independent and credible” civil aviation investigation.

While the commission remained tight-lipped, several EU foreign ministers pointed the finger at Iran on their way into EU top diplomat crisis talks in Brussels.

“It is indeed very likely that the plane has been shot down by Iranian missiles,’’ Dutch Foreign Minister, Stef Blok, said.

“It’s clear that it was an accident,’’ but “176 lives have been wantonly destroyed,’’ Luxembourg’s top diplomat, Jean Asselborn, said.

Trudeau on Thursday cited “intelligence from multiple sources” suggesting that the plane was shot down.

“This may well have been unintentional,’’ he said.

British Prime Minister Boris Johnson echoed Trudeau, saying, in a statement, that “a body of information” pointed to an Iranian surface-to-air missile hitting the plane, perhaps in error.

French Foreign Minister, Jean-Yves Le Drian, called for the “fullest transparency” on the circumstances of the disaster, amid reports that the plane’s engines could have been produced at least partially in France.

“If we are asked, we could provide our expertise,’’ he told RTL radio.

“For the moment, we have not been asked.’’

Sweden’s top diplomat said that 17 people with ties to Sweden, including seven people with Swedish citizenship and 10 others with residency in the Scandinavian country, were killed in Wednesday’s plane crash.

“They were all someone’s child, classmate, friend or colleague.

“My thoughts are with the families,’’ Swedish Foreign Minister, Ann Linde, said.