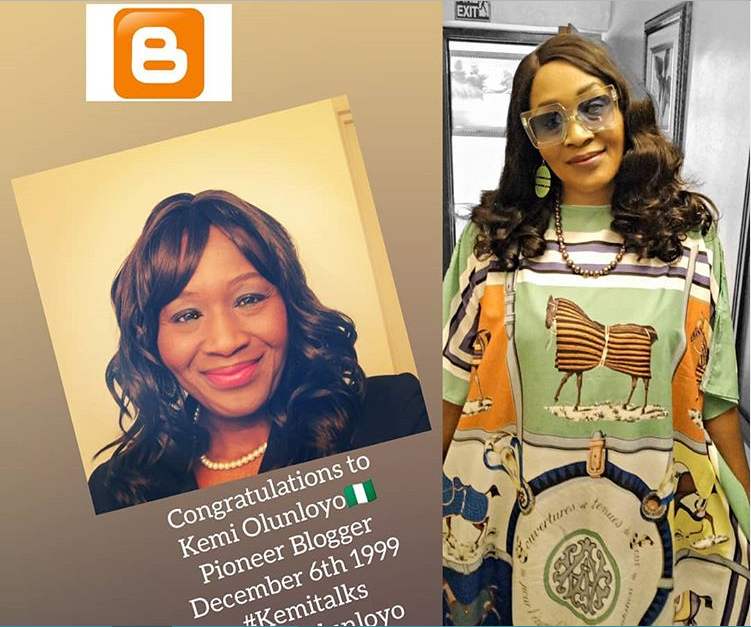 Barely a month after announcing her exit from journalism, popular Nigerian blogger, Kemi Olunloyo, on Monday, made a crucial announcement about her career.

Olunloyo said she is returning to journalism and this time she is for serious business.

WuzupNigeria reported last December that the journalist who celebrated 20 years of blogging in 2019 informed her fans that from 2020 she would be quitting her pen career for evangelism.

She said she had closed down all her journalism accounts on social media and would now dedicate 2020 to propagating the gospel and leading youths to Christ.

She made an epic return to social media on Monday, saying she is now back to her long-time career but with a new platform – Kemi Talks Media.

“No more FREE NEWS. If you make a request now till February 1st, you get in FREE on Instagram and Twitter. COMMENTS CLOSES HERE SOON SO I CAN REST AND GET TO WORK WITH.”

Her decision may not be unconnected with the series of accolades she received on social media at the weekend over the drama between Davido and his fiance Chioma.

The singer and his wife sparked breakup rumour after unfollowing each other on IG. The move according to some nosy fans may be as a result of the bombshell dropped by Peruzzi’s former manager King Patrick of Golden Boy Entertainment.

Patrick had alleged in a tweet that Peruzzi was sleeping with Chioma before pimping her to Davido as his cousin, a claim Olunloyo had made about a year ago.

Following Patrick’s allegation, many social media users showered accolades on the journalism skills of Olunloyo who was the first to make the claim in February 2019.

Basking in the euphoria of what looks like a confirmation of her report, Olunloyo also posted an audio on her IG page and told her fans that she is bringing a new dawn to journalism and blogging.

In a post titled: A NEW DAWN IN JOURNALISM AND BLOGGING:

My son @Rich KJTmusic said that if nobody believes in me, he does. Kayode Joshua Taiwo lamented on how I taught him how to BLOG on his 6th birthday in November 2006 and continued on Canada as the award winning Yahoo Canada Kid Blogger of the year 2009 endorsed by Canadian, US media and several Celebrities including Drake. He was invited to so many events including the Grammys and Juno awards. The US embassy honored him in Canada and so much more. He has seen how much Nigeria has discredited me and saw me arrested 3 times Persecuted on Nigeria.

After 3 years Rich KJT now a musician, digital Creator and blogger created #KemitalksMedia alongside me while Farouq Osuolale the graphic design genius student from University of Ibadan did our logo.

Every rank has a responsibility attached to it, FRSC urges newly promoted officers
Twitter users share experiences as lady gets robbed by man she went on a date with