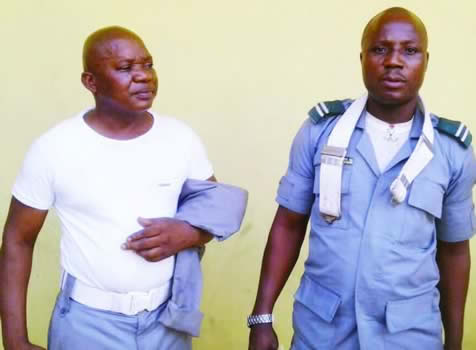 There was confusion in the Ikeja area of Lagos State on Friday after some officers of the Nigeria Customs Service, Federal Operations Unit, Ikeja, allegedly attacked a magistrate, Lekan Aka-Bashorun, for impounding their vehicles.

It was gathered that court exhibits and recording gadgets were also damaged by the customs officials, who claimed that their vehicles could not be impounded by the Lagos State Mobile Court.

The officials were said to have arrived at the NCS, FOU headquarters, Ikeja, where some private cars were reportedly parked along the walkways.

Our correspondent learnt that as the mobile court officials impounded the vehicles, some customs officials allegedly barricaded the highway with stones and tyres.

The customs officers, who were said to have forcefully removed the number plates from the impounded vehicles, allegedly hit the magistrate for ordering that the vehicles be impounded.

A witness, who gave his name only as Ibrahim, alleged that two mobile phones belonging to the officials were seized by the customs officers during the rampage.

He said, “It was around a car wash area. To show that it was wrong to park vehicles by the walkway, there was also a ‘No parking’ sign, put there by the customs authorities. But some vehicles were parked there. The state mobile court impounded the vehicles.

“But the customs men trooped out and blocked the highway with stones and tyres. They beat up the court officials. One of them slapped the magistrate. They removed the number plates of the impounded vehicles. They also took two mobile phones. A camera, which was being used to record the scene, was taken away.”

PUNCH Metro learnt that two customs officers were arrested by the police during the affray, while officials of the mobile court were quickly taken away to safety.

It was gathered that the two customs officers – identified as Goyit Bulus and Sunday Olugbogi – were later released on bail.

The Public Affairs Officer of the task force, Adebayo Taofiq, confirmed the attack, adding that items taken away by the customs officers had yet to be returned.

He said, “One of the customs officers, identified only as Yusuf, slapped the magistrate for ordering his court officials to impound the NCS officers’ private vehicles for traffic offences.

“Two other customs officers beat up paramilitary officers and policemen at the scene. It took the intervention of the task force Chairman, SP Olayinka Egbeyemi, to have the court officials rescued.

“The assaulted magistrate’s stand is that no government official is above the law. The magistrate has directed the NCS to compel the officers to return all court exhibits, the camera and the mobile phones taken away from the court.”

The Nigeria Customs Service Public Relations Officer, FOU, Ikeja, Ejesieme Uche, confirmed that there was a clash between customs officers and policemen attached to the mobile court, adding that the heads of the NCS and the police had met and resolved the matter.

He said, “There was an unfortunate incident between some of our operatives and the security men attached to the Lagos State Mobile Court. The security men came for an operation around our vicinity. We were accused of slapping a magistrate. I am not confirming or debunking that, but in that situation, the magistrate did not wear uniform, so no one could identify him. But the heads of the security agencies have met and the matter has been resolved.”