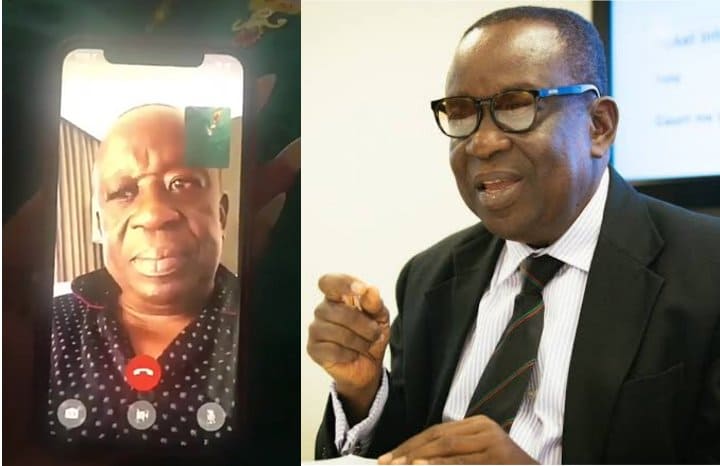 A video of Ghana’s National Security Minister, Albert Kan-Dapaah having a romantic video conversation with his alleged side chick is presently making the round on social media.

The video which has since gone viral on the internet has sparked outrage among his countrymen who have been questioning how a security minister could be enmeshed in such scandal.

In the footage, the minister who was in Europe at the time of the video call, was seen in a hotel room and was heard discussing what he was wearing at that moment and the brand of the pyjamas he was wearing.

The lady whose face could not be seen was heard telling Kan-Dapaah to turn around like a model, lift his leg and show her how he is dressed.

The side chick also instructed the minister to ensure he calls her before leaving his hotel room for his meeting so she could assess his dressing.

The minister was heard saying:

“How much I wish I could have hugged you. Awwww I did that day and it was sooo nice. It will put me to sleep immediately. The last time you did to me, didn’t it put me to sleep?”

Meanwhile, the minister has reacted to the leaked video, saying it’s a doctored footage

According to the Minister, the video which is doctored is part of a broader series of conversations in an effort to uncover persons behind attempts to gather material that could be used to compromise key personalities.

He revealed that persons associated with it are subjects of an ongoing investigation known to the relevant security hierarchy.

“My attention has been drawn to a video circulating on social media purported to be a recorded conversation of myself and a friend.

“The said conversation is first of all, part of a broader series of conversations in an effort to uncover persons behind attempts to gather material which could be used to compromise key personalities. Security sector persons routinely employ various methods including baits to uncover cells. This conversation is one such effort.

“Secondly, the recording of this conversation and a second telephone conversation of a different subject have been doctored to achieve a false impression of untoward conduct by myself.

“Thankfully, an operation related to this matter was successful in retrieving the original and the edited versions of some of the materials. Persons associated with it are subjects of an ongoing investigation known to the relevant security hierarchy.

“I assure the Ghanaian public that nothing compromising, untoward or undermining has been occasioned.“