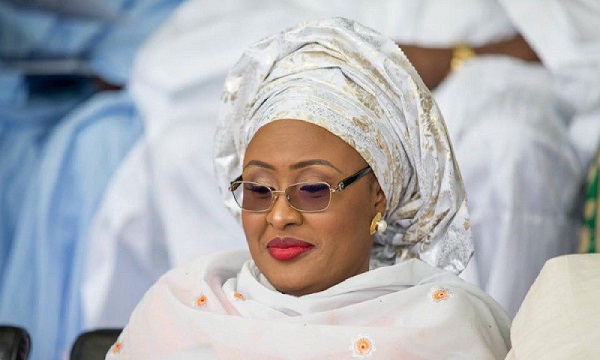 Aisha Buhari, the wife of the President Muhammadu Buhari, is presently at loggerheads with the family of Mamman Daura, the President’s nephew.

Aisha has accused Fatima, daughter of Daura of ridiculing her inside the Aso Villa following the release of a viral video where she was seen raging.

Daura’s daughter, Fatima, in an interview with the BBC Hausa Service on Monday, owned up to the viral video shot at the Presidential Villa.

The First Lady and Fatima, in separate interviews with the BBC Hausa Service shed light on the video, which went viral on Friday.

On her part, the President’s wife confirmed in a 25-second voice clip on the BBC Hausa Service website that she was the person in the video in question.

She accused Fatima of recording the incident while the security detail did nothing because the culprit was Mamman Daura’s daughter.

It was gathered that the cause of the rage was over an apartment within the Villa called the Glass House.

According to Fatima, the Glass House was one out of several apartments within the villa which the President gave Daura when he was elected as President in his first term.

When the President’s son, Yusuf, had an accident and went to Germany for treatment, the President was said to have told Daura to move out of that apartment to go to another apartment on Yusuf’s arrival.

But on their return, Aisha was peeved to found that the apartment was still occupied by Daura’s daughters which led to the rage.

“I was the one in the video, those behind me were the security personnel given to protect me.

“It was Fatima, the daughter of Mamman Daura that shot the video in front of my security and everybody there. She was actually recording the whole thing right in front of me and was laughing and mocking me.

“They did that because my husband sacked them from the house. He told them to get all their belongings and leave the house for my son (Yusuf) to occupy.

“I wanted to pass through that door to go into a store but they closed the door.  I took an alternative route but the door was still locked.”

Nigerians are not hungry, says Minister of Agriculture