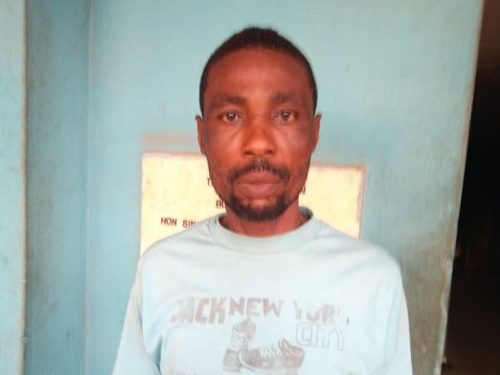 Oluwole Bamidele was said to have lured the girl into his room at Agoro area of Agbado at noontime and raped her when her mother left home for her tailor’s shop.

The Police Public Relations Officer, DSP Abimbola Oyeyemi, in a statement, said Bamidele was arrested after one Ikechukwu Blessing Orji reported at the Agbado police station that his daughter was defiled.

Ikechukwu reported that while his wife went out to give cloth to her tailor at about 12:45 pm, the suspect who is a co-tenant in the same house lured his six-year-old daughter into his room and raped her.

According to the victim’s father, the girl quickly informed her mother as soon as she returned.

The Police Spokesman in the state explained that the Divisional Police Officer for Agbado division, Aloko Amodu sent detectives to Kayode Street Agoro area of Agbado, the scene of the crime, and arrested the suspect.

The Commissioner of Police, Bashir Makama has directed that the suspect should be transferred to the Anti-Human trafficking and child labour unit of the State Criminal Investigation and Intelligence Department for further investigation and prosecution.

Continue Reading
You may also like...
Related Topics:Agbado, Ogun, rape

Thieves break into doctor’s house, cook and eat before stealing electronics
How I lure ladies to hotel, then kill them, PH serial killer confesses [Video]