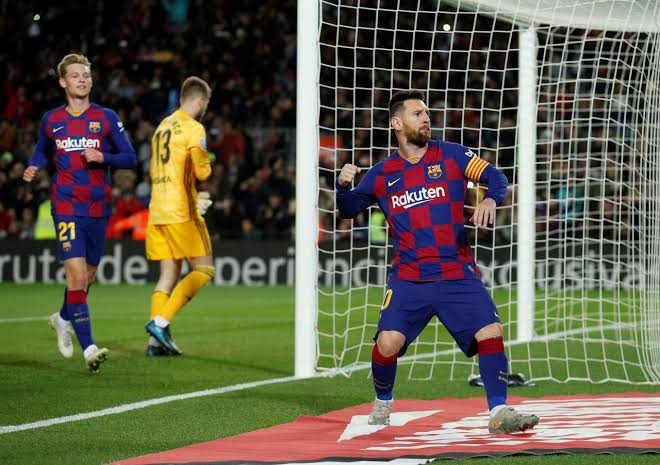 A Lionel Messi hat-trick and a late Sergio Busquets goal gave Barcelona an ultimately comfortable 4-1 win at home to Celta Vigo on Saturday night as the Catalans climbed to the top of La Liga following a difficult week.

Barca lost 3-1 away to Levante last Saturday and were held to a disappointing draw at home to Slavia Prague in the Champions League on Tuesday night.

That had increased pressure on coach Ernesto Valverde ahead of this game and Barca started poorly against a Celta Vigo side in their first game under new coach Oscar Garcia.

Oscar came through the youth system at La Masia and has intimate knowledge of Barcelona, having also coached at the junior level at the Catalan club.

Celta made life difficult for the champions, the home side struggling to bring the ball out from the back as Busquets began on the bench.

But Aidoo’s handball gave Messi the chance to convert from the penalty spot and the Argentine sent Ruben Blanco the wrong way after 23 minutes.

Busquets then came on for the injured Nelson Semedo, but still, Barca were unconvincing and after Messi was penalised for a foul just outside his area, Lucas Olaza curled home a sweet free-kick with his left foot after 42 minutes.

It looked like the two teams would go in on level terms a the break, but Barca won another free-kick and Messi dispatched the set piece in a carbon copy of Olaza’s.

The Catalans had still not scored in open play in over 230 minutes of football, but Messi made it 3-1 with another fantastic free-kick early in the second half to complete a superb set-piece hat-trick.

Celta never recovered from that blow and Antoine Griezmann missed a great chance to make it 4-1 before he was substituted late in the game as Luis Suarez made his comeback from a calf problem.

Ousmane Dembele, who had replaced Ansu Fati at the interval, then saw a cross headed away, but Busquets was on hand to hit home with a sweet strike for 4-1 five minutes from time.

Barca return to the top of the table, although the Blaugrana remain level on points with rivals Real Madrid after 12 matches each.

Celta are still in the bottom three with just nine points from their 13 games.