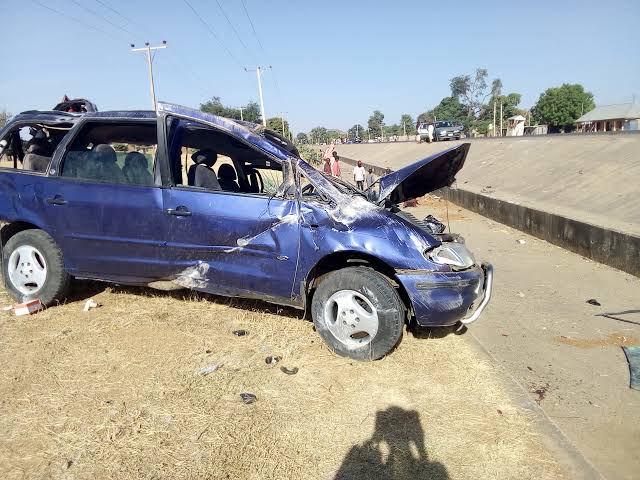 A mom and her baby – believed to be less than a year old – have reportedly died in a fatal auto crash that occurred on Thursday in the Badaromo village end of the Bauchi-Darazo Road in Bauchi State.

The incident claimed a total of nine persons.

Nine people have been reportedly killed in a fatal auto crash that occurred on Thursday in the Badaromo village end of the Bauchi-Darazo Road in Bauchi State.

A member of staff of the Abubakar Tafawa Balewa University Teaching Hospital said nine corpses were brought to the hospital.

“I counted nine corpses that were brought here this morning. They were a mother and her infant, a young lady and six males.”

The Federal Road Safety Corps confirmed the accident. It, however, said six people were killed.

The Public Relations Officer of the FRSC, Bauchi Sector Command, Rilwan Suleiman, said a mother and her baby and four other males died in the crash.

“Today, Thursday, November 28, 2019, at exactly 9.30am, we got a call that there was a crash involving two vehicles, a Honda Hennesy which had five occupants and a Volkswagen Sharon.

“In the process of trying to overtake a vehicle, the driver of the Honda collided with the Sharon which carried nine people. In all, 14 people were involved in the crash. In the process, the Sharon veered off the road into the bush and somersaulted which resulted in the death of six people.

“Our men rushed to the scene and took them to the Abubakar Tafawa Balewa University Teaching Hospital, Bauchi, where six of them were certified dead by a medical doctor.

“Those who died were two females – a mother and her baby and four males. The remaining nine people who sustained varying degrees of injury were taken to the hospital for treatment.”

Suleiman said the corpses were deposited at the mortuary of ATBUTH.

He said the vehicles left Misau for Bauchi before they had the accident some 25 kilometres away to their destination.

“What we are saying is this; drivers need to change their attitude towards driving because most of the crashes are as a result of their refusal to obey simple traffic rules and regulations while driving.

“The driver could have waited for a few seconds for the oncoming vehicle to pass before overtaking the one in front of him; but look at what happened because he refused to wait.

“So, I call on drivers to be law-abiding and have respect for lives.”