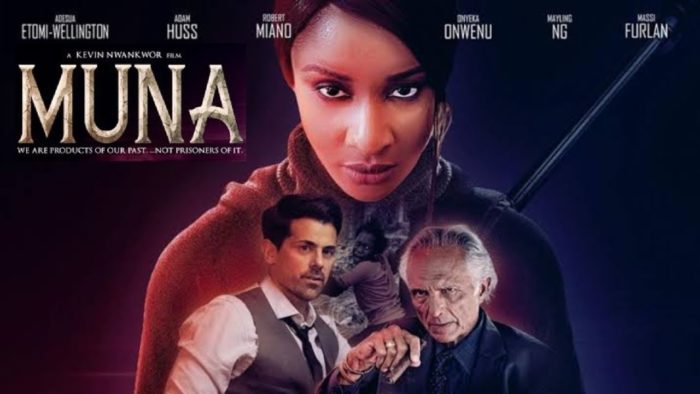 From the moment the teasers were released in the early weeks of 2019, the focal point for action film, ‘Muna’ has been Adesua Etomi-Wellington.

Adesua moved audiences to see the film in the cinemas as the trailers did little justice to the plot and motivation of the movie. Instead, it focused on showing us quick shots of Adesua displaying martial arts skills.

The trailers show that a Nigerian actress can fight like a female James Bond and shoot realistically.

Settling down as the first scene jumped on the screen, we see a young girl fighting for her peer, who is about to be sexually abused. The setting is a rural community where life is simple and easy.

It is the child-saviour we follow as she reminisced on the memories of her late parents. We see her grandmother – Onyeka Onwenu delivering not-so-great lines with excellent acting. The sentimentality continues as the story progresses until Mr Patrick enters the picture.

There is a small twist viewers do not expect. It is subtle but it sets the tone for the rest of the story. The consequences of birth ‘Muna’ and introduces Adesua displaying her fighting skills.

The audience sits back at this point as the main reason for coming to see the film had begun.

This was also where mixed feelings began. The story up to this point has been somewhat rushed and why the motivation could be understood, it did not sink well enough for the audience to look forward to the cold revenge.

This was almost salvaged when another sentimentality was built. In a subplot, Muna falls in love with Tony, the son of a major human trafficking kingpin. The transition between the romance scenes and the revenge plot lost synergy at some point, losing the audience on the trail.

At some point, the plot seemed stretched with the fight-action sequence coming in to save the day sometimes.

Still, Adesua does a fair job with her martial arts and shooting skills. It is not Bond-level but it is better choreographed than the average Nollywood fight scenes.

This did not in any way excuse her uni-directional acting. Her portrayal of emotions and will of the character is mediocre at best, not even her glaring fitness and beauty prep for the role could reach into the souls of the audience and draw the empathy her character craved.

In spite of these, the film has an international feel to it and it is a fair attempt at the fan-favourite action-thriller genre. There are several layers each character peels, although the stiff directing does not let it show well enough for the audience to come along.

The beauty of action thrillers is to plot a case the audience will die to solve. There are sentiments in ‘Muna’ that did not fly strong enough to build a case.

Away from the acting, the idea behind the film built an important case against child trafficking and the various forms it could take.

It explores the menace in deeper ways than the average person thought possible, especially the planned mafia style the operations takes. At this time, the fight against child trafficking is more pertinent.

All in all, ‘Muna’ is a testament that Adesua is more than just a romance lead or face actress. It shows that she can be stretched physically to play any character as long as the director understands the motivations of that character. (NAN)