Nigerian celebrity crossdresser and entrepreneur, Idris Okuneye Olorunwaju, popularly known as Bobrisky, has revealed he is getting another butt surgery after the COVID-19 lockdown.

The 28-year-old recently visited Dubai, the UAE city, with his bestie, Tonto Dikeh, where he claimed he had a bottom enlargement surgery.

Despite criticism that he lied and only used butt pads, camera angle and more to make his backside appear bigger, the internet sensation has revealed his boyfriend likes big butt and he’s ready to pay for another enlargement.

In a video shared on his Instagram page, he revealed he will go for another surgery as he claims his alleged bae loves it bigger.

See his video below:

Bobrisky is a Nigerian internet personality who is known as a transgender woman in Nigeria, a country with no LGBT rights. She is also known for her presence on the social media app Snapchat.

He is known for selling and promoting bleaching creams and making controversial statements online.

The success of comedy cannot be written without Lagbaja, Ali Baba Reveals

Not all representatives of BBNaija are positive- Khafi Kareem 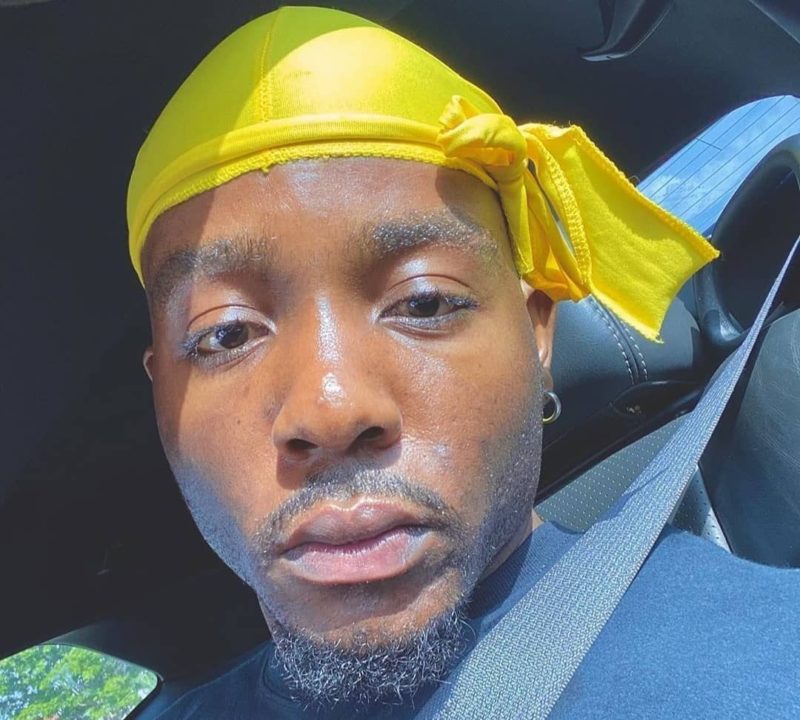 Indigenous rapper Zoro has threatened to drag the lady who accused him of rape to court.

WuzupNigeria reports that an Instagram user, mystic_sweetness, had accused the rapper of raping her in 2015.

The lady had in her allegations said that the rapper raped her in his friend’s house in Magodo area of Lagos on April 20, 2015.

Reacting to the allegation on his IG page not long ago, the rapper shared a screenshot of a tweet where he decried reports of rape cases in Calabar in 2015.

He went on to state that he feels terrible that someone will accuse him of rape and maintained that he will never partake in such act or have a relationship with a rapist.

Zoro also said he’s decided to take legal actions to address the rape allegation and is also willing to provide legal support for the Instagram user to ensure she has proper representation and to make sure there’s no thought of suppression or intimidation.

Rape is such a nasty act, that I will never ever take partake in it or be involved with anybody that rapes, I even find it difficult to say the word. I feel really terrible that someone has accused me of the act. I do not know exactly why she is doing what she is doing. I forgive and I pray God forgives her too, but because this will also hurt people that look up to me, my family brands I work with and fans, I have decided to take legal actions to address this.

I am willing as well to provide legal support to Yachit too so she has proper representation and to make sure there’s no thought of suppression or intimidation. My team also tried to contact her to understand exactly what her problems are but she labeled it suppression and trying to shut her up which is also false, this one weak me meyne but God Dey.

To make it clear, I did not rape Yachit. I’m putting this out ahead of my legal team’s statement.
Stay careful out there guys 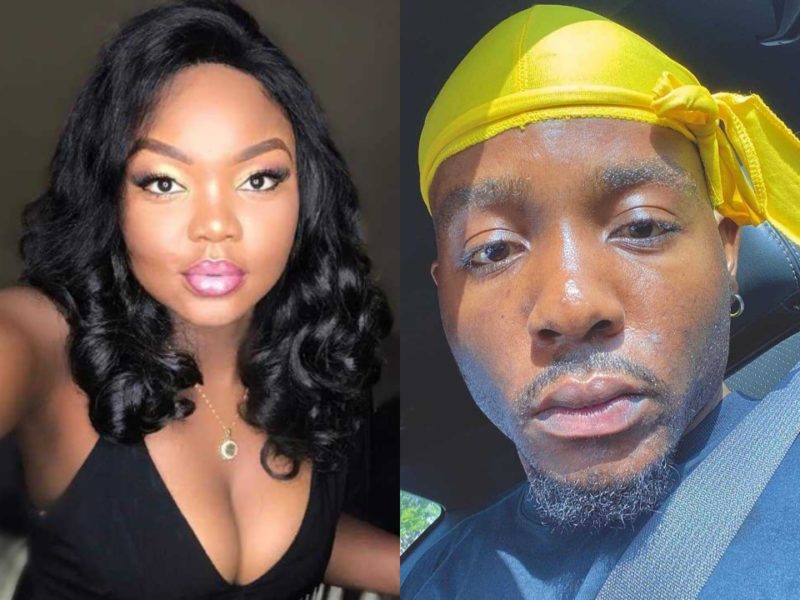 The past few weeks in Nigeria have been somewhat terrifying due to the recent killings and rape cases in the country.

Many rape stories have been shared on various social media platforms and so many have called out Nigerian celebrities for allegedly perpetrating such inhumane act.

Indigenous rapper Zoro is one of the latest celebrities to be accused of being a rapist by a victim.

An Instagram user with the username mystic_sweetness is the latest to speak up about being raped by a Nigerian artiste.

Via her Instagram page, the lady posted a photo of Zoro and proceeded to share her rape story.

Five years later she has found the courage to called out her molester.

The incident happened in Magodo at the house of a mutual friend.

Read through her story below;

I just thought I should share this…. @zoroswagbag in April 20th 2015, at your friend’s house in Magodo CMD road, I followed my sister to come visit your friend(KOKO) whom you were squatting with then, and you asked me out which I told you I will think about it, after an hour of just meeting you, you called me into your room because you claimed you wanted to talk to me in private, how gullible I was to think it was just going to be a decent conversation with you, when I got into your room, you started forcing yourself on me to have sex with me, after struggling with you for over 30mins you overpowered me and raped me!!! You are a rapist! And I’m done struggling with the trauma and pain you put me through [email protected] 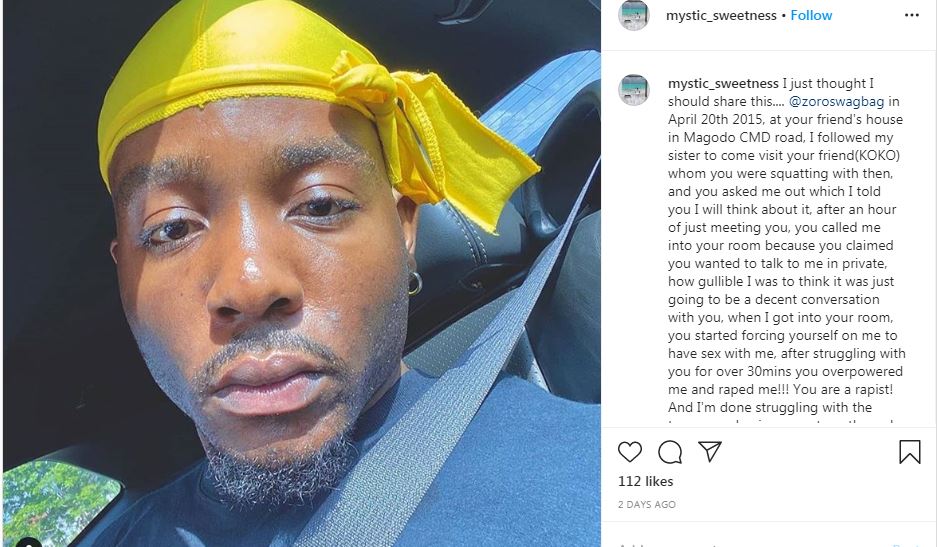 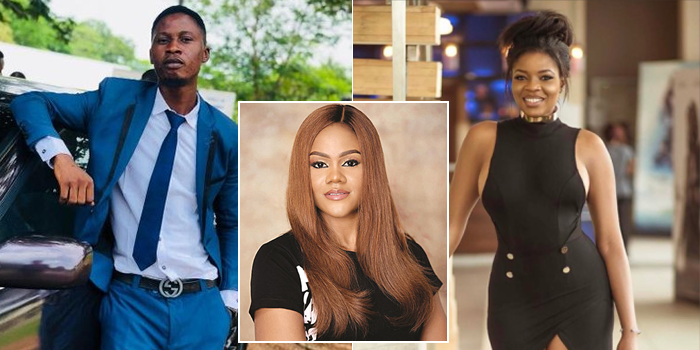 Due to the recent rape cases and killings that have continued the ravage the country, many victims have opened up and even called out the perpetrators of such disgusting acts.

This comes after Dakolo recently gave an update on the case.

”Please let busola Dakolo go and sit down. She has gained almost all she wanted from the clout chasing. She has got her instagram account verified, become the face of rape victims gain lots of followers. Except one thing. The man of God is still standing! Thats a loss battle dear.”

Reacting to the tweet, Adetiba stated that she hopes the troll comes back to it in the future and realize that it was a stupid tweet.

“Yes. She came out and put herself and her family under immense mockery and scrutiny for a verified Instagram account and to be the “face of rape victims”. Hopefully in the not too distant future, you’ll come back to this documented tweet of yours and realize how STUPID it reads.” 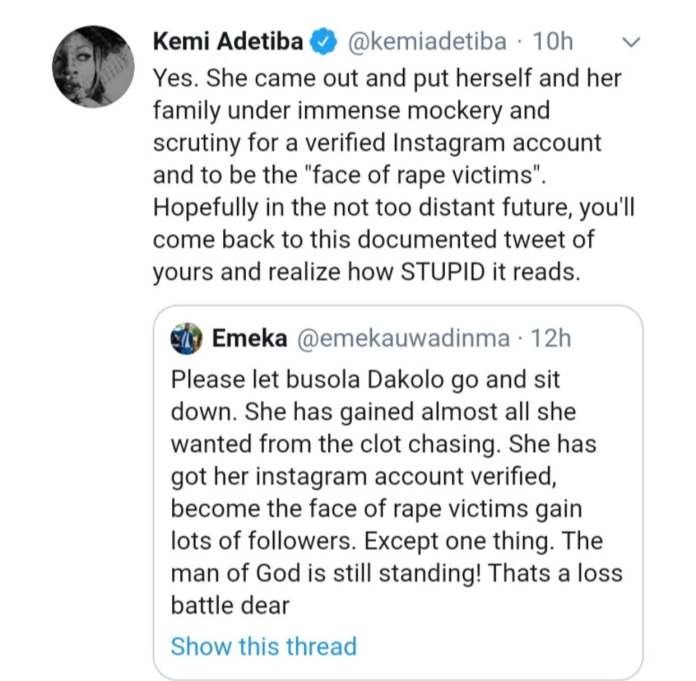