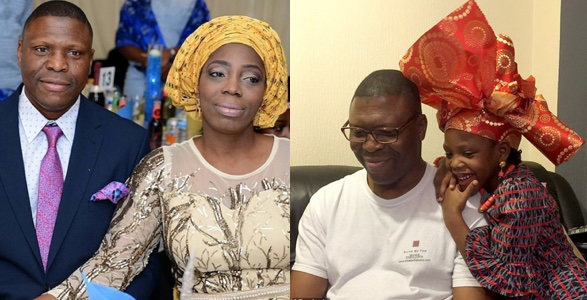 Olubunmi Diya, the wife of a pastor of the Redeemed Christian Church of God (RCCG), Gabriel Diya, who died with his two children in a pool in Spain, says her husband and children knew how to swim.

Mr Diya, 52, who pastored Open Heavens parish in Charlton, London, died in a hotel swimming pool on the Costa del Sol, Spain on Christmas Eve alongside his son Praise-Emmanuel Diya, 16, and daughter Comfort Diya, nine, while on a vacation.

The heartbroken mother told Sky News on Friday that something must have been “wrong with the pool that made swimming difficult for them at that point in time.”

She said in a statement:

“The whole family, all five of us went to the pool together and were all present when the incident occurred.

“The children were not left unattended. We followed the instructions displayed by the poolside at all times. Our family are utterly heartbroken by the events last Tuesday, but we are comforted and strengthened by our strong faith in our Lord Jesus Christ.

“We are deeply shocked, saddened and struggling to come to terms with their passing. They all brought a joy and love to the world and to everyone that crossed their path.

“We love them all dearly, will always remember them in our hearts and miss them greatly.”

Mrs Diya’s comments contradict that of her surviving daughter, Favour, whom reports claimed said the family didn’t know how to swim.

A spokesman for the Civil Guard union AUGC, Francisco Gonzalez, was quoted saying:

“The surviving sister has said they didn’t know how to swim.

“With that information and the fact we know the water in the pool was very cold, the mystery of what caused this awful tragedy begins to unravel itself.”

Resort management, however, said on Wednesday night that the Civil Guard had given them permission to reopen the pool to the public, a move that attracted a backlash.

The force, however, insisted it had never authorised the reopening of the pool because the resort operator was responsible for the holiday complex and the safety of its holidaymakers, and police had never closed it in the first place.

Olubunmi, an assistant pastor and systems analyst who owns her own software firm, is due to return to the UK on Saturday with her surviving daughter.

They are currently being comforted by relatives who flew to Spain from Britain.

It is not yet clear whether they will delay their return or fly back home as scheduled.