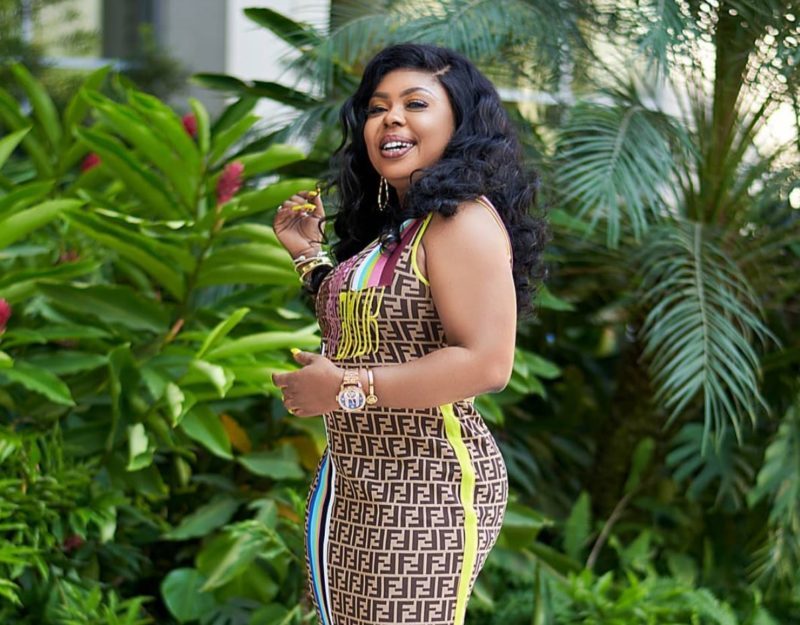 Ghanaian celebrity and loudmouth, Afia Schwarzenegger, has given conditions for her getting married again.

It would be recalled that the television and radio personality’s first marriage ended with an infidelity scandal after her then-husband, Lawrence Abrokwa, caught and filmed her in their matrimonial bed with another man.

It, however, appears Schwarzenegger is ready to give marriage a chance again albeit with a stringent condition – her would-be husband must be ready to cough out between $6,000 and $10,000 monthly as salaries.

According to the mother of three, she needs to keep up with the life she lives currently and marriage cannot stop her from that hence the need for a milk cow.

Schwarzenegger said this when she spoke in an interview with Accra-based Onua FM.

“Any man I will decide to marry will have to sign a contract with me. He should be ready to pay me every month.

“He should be ready to pay me $6000 – 10,000 every month because I will be travelling and buying expensive things like I currently do,” local media quoted Schwarzenegger as saying.

A post shared by 👑Queen Afia Schwarzenegger👑 (@queenafiaschwarzenegger) on Dec 9, 2019 at 9:44pm PST

The Ghana/Nigeria beef is fake, they love each other – Cardi B (video) 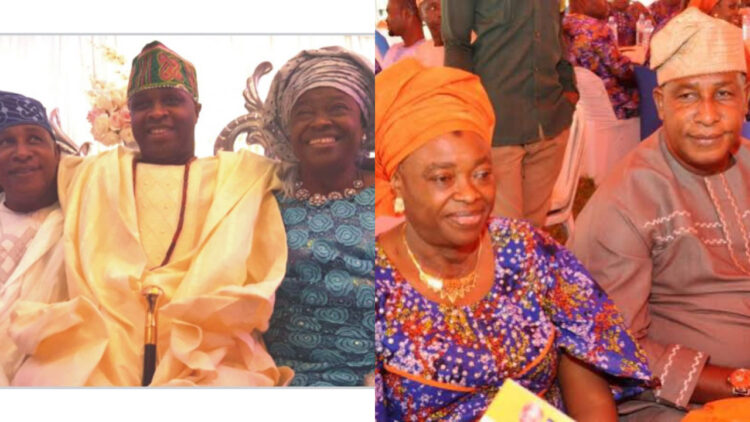 The first wife of veteran actor and movie producer, Adebayo Salami aka Oga Bello,  Alhaja Risikat Ejide, has opened up on how she coped with her husband’s infidelity when they got married.

Opening up on the 45 years they have spent together in their marital home, her husband’s many children and more, Alhaja Risikat Ejide in a chat with Tunde Kelani TV started with how he ill-treated her during the early days.

“Well, I met my husband in our primary school, Ansarudeen Primary School, Oke Popo, Lagos Island. Then we just knew each other as primary school students. My husband, Adebayo Salami used to be so full of himself. We used to call him “Oba” (King).

He was a Prefect so whenever I am found wanting, he had special ways of dealing with me. Whenever they say we should do our ablution and I didn’t do it, he will beat me. Whenever he beats me, I always go to his parents to report him.

So one day, I went there as usual and his father sent me away to stop coming to report him. As kids, I could go to his parents 3 times a week to report him. That was how I stopped reporting him. So after that scenario, he will beat me to stupor until we later became friends.

Well, despite all the things he was doing to me, I didn’t blink an eyelid. This is because I like him. I like him so much that everyone in his area knew that we shared an inseparable bond. Do you know that whenever I go there, I don’t always meet anyone? So I also won’t spend much time because they will be looking for me at home. I may now go and see him 10 times a day until I am tired.
READ ALSO: I felt dirty and ashamed, BBNaija’s Khafi Kareem reveals her rape experience

On how she coped with his stardom, she said

“Just like my husband said, when he became so popular, many women were frolicking around him. He couldn’t manage it. But my mum is a very tough person. I remember she told me that I can’t come back after marriage as it is all about endurance. So going home to tell her wasn’t a choice.

Then my immediate elder sister that was very close to me didn’t have an enduring spirit like me. So I told myself that I will keep it to myself. I felt that telling people or seeking advice may make people instigate me against him. I love my husband and I don’t want us to fight.

It took me many years for me to tell my parents that my husband has other wives.

They couldn’t do anything since I wasn’t complaining to them. I was also working and making good money. I also believe its destiny. So whenever I hear that he impregnated somebody, I don’t ask him, but sometimes he will tell people to beg me. He also formed the habit of running away whenever that happens.

I think he also saw that it was too much. This is why I didn’t have friends. I don’t want friends to tell me things that will make me fight my husband. So the last one he did and ran away; I had to tell his friends to help me look for him that I am not angry. I love my husband so much.

When asked if she ever got angry, she said;

“Angry, no, but as a human being sometimes it is painful. Sometimes I think about it but love won’t allow me get angry. I just tell myself, I have my own kids. I have boys and girls, what else? So I told myself, I will be patient with him and look after my children. While doing all that, my husband brought his other children for me to train and that was how I trained them.

Talking about his other wives, she said;

“Oh! I have to accommodate them. I love my husband and anything he stands for. How many people do I want to fight? I am not saying it is not painful but what do I do? Let me shock you. There was a day I cried from morning till night but after that, I told myself, “why are you crying, you better stand up and make food for these poor children. Then we were staying at Atitebi in Ebute-Metta. Look at those kids now, you won’t even identify their individual mothers.

They love me so much. One should accept destiny and trust in God.

MORE READING!  Tonto Dikeh set to give out N5M on her birthday

Oga Bello and some of his children She concluded by saying she will marry Oga Bello if she came back to the world again. 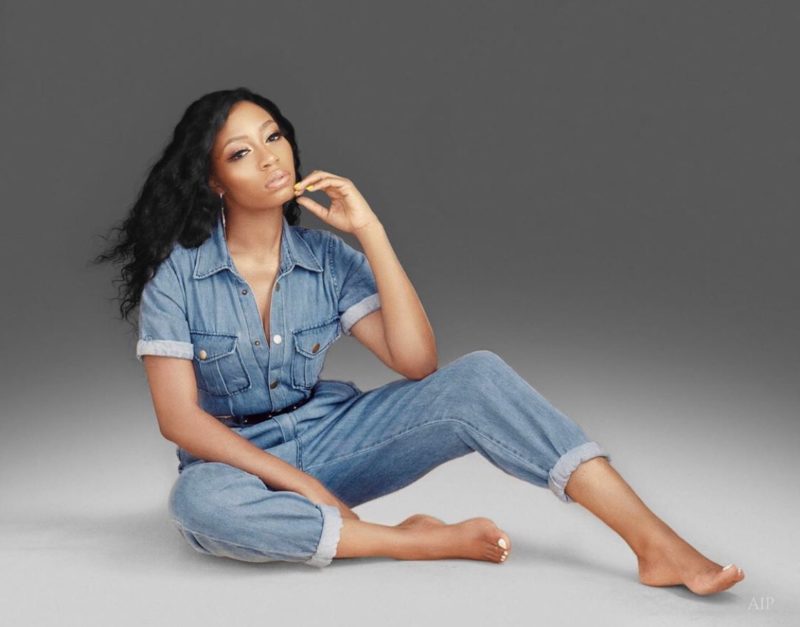 Reality TV star, Khafi Kareem, who recently joined the social media conversation on rape and sexual violence against women revealed that she is also a victim of rape but hers happened years ago.

Explaining why she never reported her rapist, Khafi, who admitted that her rapist apologised right after the incident, said:

‘I made myself believe him being drunk was an excuse.’

Khafi further said that when she decided to tell someone about the rape incident she ended up being blamed for getting raped.

According to the reality star, she decided to share her story to give hope to other victims to speak up about their own experiences.

She wrote: ‘#WhyIDidntReport – because he apologised right after. Because I made myself believe him being drunk was an excuse. Because the one person I did tell said I caused it. Because I felt dirty and ashamed. #WeAreTired.’

‘Yes, this did happen to me. I’m sharing in the hope that others will feel no shame in sharing what happened to them. Please don’t deflect or say it is not my story when it was already hard enough sharing it.’ 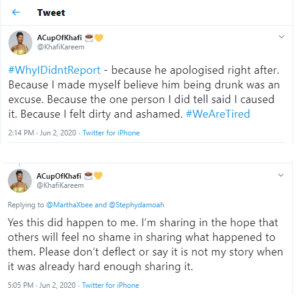 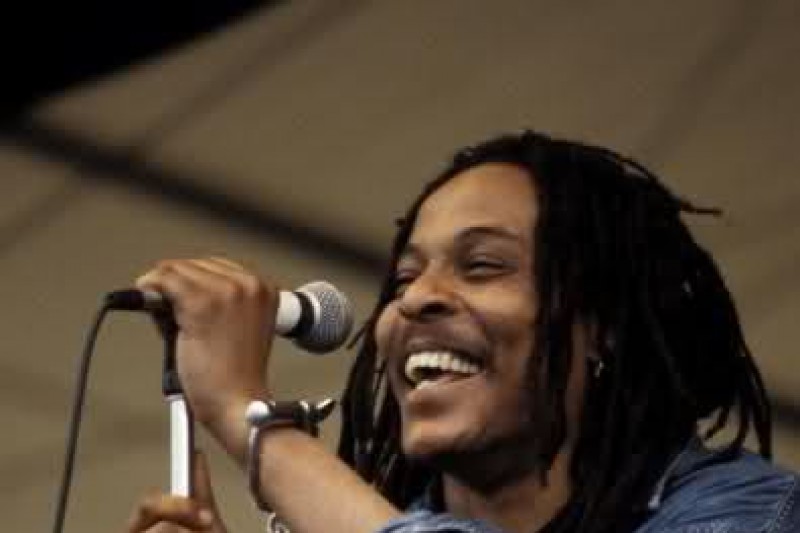 He extolled the late reggae icon in an interview with news reporters on Wednesday in Abuja.

The Nigerian entertainment industry was thrown into mourning on Tuesday when Fashek’s death was announced by his manager, Omenka Uzoma, on his Instagram page, saying the singer died in New York, where he was receiving treatment.

Music lovers, celebrities, and fans of Fashek across the world have taken to their social media platforms to mourn and pay tribute to him.

According to Charlyboy, Fashek was a revolutionary musician whose music send messages that addressed social issues that affects society.

The former president of the Performing Musicians Association of Nigeria (PMAN) said he came in contact with the late artiste over three decades ago and worked together in the early days of their music careers.

“My father came from Lagos to Oguta, my home town, along with Majek Fashek, and he spent one good year with me.

“In fact, he sketched his hit song ‘Send down the Rain’ in my small studio than in the village, where I also learnt a lot from him about music.

“Majek was both handsome and talented as a music artist, and he was a lyrical wizard because his lyrics were so powerful and revolutionary.

“There were other talented musicians during his era, but the message in his songs is so on point and that is why I so much admired him,” he said.

The ‘Areafada’ noted that although Fashek was no more, his songs will remain timeless because of the inspiration behind the lyrics.

He however prayed that God should grant the family of the departed artiste the strength to forge ahead, as death is an inevitable debt every mortal must pay.

According to reports, Majek Fashek, born Majekodunmi Fasheke to a Benin mother and an Ijesha father (Osun State), had a legendary music career that spanned over three decades before his demise at age of 57.

He was best known for his 1988 album ‘Prisoners of Conscience’, which consists of the acclaimed song ‘Send Down the Rain’, a hit that earned him the moniker ‘The Rainmaker”.

Some of the musical hits that defined Fashek’s career include ‘So Long, Too Long’ which was released in1991 with a strong political and pan-African message, and ‘Free Mandela, Free Africa’, his anti-apartheid anthem.

Others are ‘Majek Fashek Ina Newyork’, a song about his experience the first time he visited New York, which later became his second home; ‘Religion Na Politics’, a hit in his 2012 album, ‘I & I Experience’.

In 2015, Fashek was reported bankrupt and battling drug addiction, and was admitted into a drug rehabilitation center in Abuja where he recovered and returned to music.